Hi there! Today I’m sharing a review for a contemporary M/M sports romance from Carol Lynne. FIGHTER is a bit of a sports epic with a huge cast and a lot of heart. 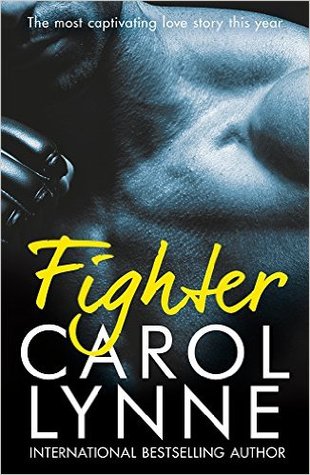 About the book:
For Lucky Gunn, the hardest fight of his life happens outside the cage. On the south side of Chicago sits an old gym called The Brick Yard. Ten years ago, on a bitterly cold day, Lucky Gunn wandered into The Brick Yard dressed in a threadbare jacket, looking for refuge. He hadn’t expected the owner, Tony Brick, to welcome him with a job and a place to sleep when Lucky’s abusive and drug addicted mother made it too dangerous to return home.

Dray was a gay man living in a world of straight fighters. When his secret was exposed to the media, he dropped out, giving Lucky a piece of advice: if you want to make it as a MMA fighter, bury the part of yourself that won’t be accepted. Lucky discovered the cage was the perfect place to keep his demons at bay, but when he learns his trainer and mentor, Brick, is suffering from end-stage cancer, he begins to spiral out of control.

After eight years, Dray returns to help Lucky and Brick deal with the devastating news. With Dray so close, Lucky’s old desires return, and Dray teaches him more than how to fight. Torn between his career and the passion he feels for Dray, Lucky’s past demons resurface in full force, threatening his sanity and his budding relationship with Dray. Despite leaving the cage years earlier, Dray finds himself in the battle of his life with the only man he’s ever loved. Will he stand and fight, or walk away like he did years earlier?

My Review:
This is a bit of a “sports epic” in that the story arc stretches over the MMA fighting careers of two men and ten-ish years. Dray is an up-and-coming MMA fighter, the pride of The Brick Yard training facility on Chicago’s mean streets. He’s all set to get a title bout when his secret–that he’s gay–gets splashed out. Dray runs, unwilling to see how the fans hate him for his sexuality, heaving behind his mentor and pseudo-father Tony Brick, the man who raised him and saved his life in that broken down gym.

Flash-forward eight years: Lucky Gunn, who’d been a wide-eyed teen spending most of his nights in The Brick Yard’s laundry room, and watched Dray’s rise and fall is now out on the MMA circuit, only Tony’s too sick to be a good coach. He’s dying of cancer and it’s a huge mess. He reaches out to Dray to come back to Chicago and coach Lucky to a championship, and Dray resists. First, because he doesn’t want to taint Lucky’s career and later, because he’s really attracted to Lucky, and the feeling is mutual.

The thing is, Lucky’s not willing to hide his love for Dray, and he’s also doesn’t really care if his career suffers. He’s got a good life, now, and he wants a family like he’s built with The Brick Yard people, taking in runaways like Tony did with him. But, he can’t imagine doing it on his own, and he’s struggling watching Tony waste away.

So, for me, the book was less about coming out than it is about finding one’s tribe. Tony is a remarkable man whose history of saving young men from the mean streets dates back decades. The boys he saved number legion, but they all felt he was a father figure to only them. As Dray and Lucky comfort and care for Tony on his journey to peace, they learn how very much he cared for all of them, and their new passion, besides each other, becomes how to preserve Tony Brick’s legacy. They get some help from unlikely sources, but it only makes this whole story sweeter. Lucky’s still collecting kids, just the way Tony had, but now on a larger scale as they keep The Brick Yard open and include the special services help that these runaways need. Dray and Lucky are saving one kid at a time. Also, it’s good that both men are young, fit and fighters, because sometimes a bit of “Convincing” must be done to save kids from abusive parents who just won’t let go.

It’s a tender and compassionate story, and the stage is set for Dray and Lucky to make a real difference for the castaway gay youth on Chicago, it seems. Expect sweaty sexytimes and some grieving, too.

Interested? You can find FIGHTER on Goodreads, Pride Publishing, Amazon, and Barnes & Noble.

About the Author: In Carol Lynne’s words…
Well, to be honest, I’m completely boring. I spend my days juggling two young children and my writing career. You’re just as likely to either catch me writing a steamy love scene or scrubbing jelly out of the carpet.

Besides writing, my biggest passion is reading. I have a lot of authors I follow (no not in the stalking sense), but Sean Michaels, B.A. Tortuga, J.M. Snyder and Chris Owen have to be my all-time favorites.

Here are some unusual facts about me:

I drink gallons of coffee every day, but I much prefer instant. I catch all kinds of flack for this from my family and friends. Even though I only drink instant, I am very picky about which brand I buy. It must be Taster’s Choice or nothing.

I love country music, but can’t stand to have music playing in my house. Therefore, I don’t even own a stereo or radio of any kind. I listen to my tunes as I’m driving around town and that’s enough for me.

I like to refer to myself as underheight instead of overweight. I’m just sure that if I could add another six or seven inches to my short 5’2 frame, I’d be much thinner. Therefore, it’s not that I overeat, it’s just that I stopped growing.

Well, sorry folks, that’s about all I’ve got for you. Maybe someday soon I’ll have something really exciting to put on this page, but for now, this is me in a nutshell.