Hi there! Today I’m sharing a review for a contemporary M/M romance recently re-released by L.A. Witt. NINE-TENTHS OF THE LAW is a quirky romance for two men who find they have the same thing in common: their boyfriend. O.O That was a big hook for me, but I’ve loved some of her recent books, including AFRAID TO FLY and JUST DRIVE, so I couldn’t wait to get into this one.

Scroll down to catch my review and enter to win a backlist book from LA Witt! 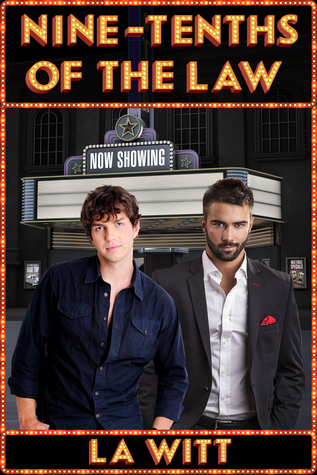 About the book:
“I believe you have something of mine, Zach.”

The stranger’s accusation throws Zach Owens for a loop. He’s never seen this man in his life, and he’s not prepared when he finds out what they have in common—their boyfriend, Jake.

Make that ex-boyfriend. With the jerk out of the picture, Zach hurries after the stranger to apologize… which quickly leads to some sizzling hot revenge sex.

Despite starting on the wrong foot, Nathan Forrester can’t get enough of the sexy movie theater owner. Still, he’s jaded and distrustful—especially when Jake keeps materializing in Zach’s presence despite Zach insisting that relationship is over.

With a devious ex-boyfriend trying to sabotage their fledgling relationship, Zach and Nathan need to learn to trust each other, or they’ll both wind up with nothing.

This 61,000 word novel was previously published, and has been revised to include an extended ending.

My Review:
Zach is a movie house owner out on a date with his boyfriend, Jake, when a stranger sits beside him and proceeds to inform him that Jake is also his boyfriend. Yeah, awkward. Both Zach and the stranger leave Jake at the bar–but Zach can’t get over his feelings of shame, and reaches out to the other man, for camaraderie, and a drink to settle the story.

Turns out Nathan and Jake had been dating four years, and Zach’s furious he was unwittingly pulled into this situation. Nathan shares Zach’s fury and the two of them quickly decide the ultimate revenge would be to have it off together. Only, it’s HAWT. A week later, Zach’s still daydreaming about how good he and Nathan were together. And a week after that, he’s thrilled to see Nathan buying a ticket for one of the art house movies showing in his theater. They talk, briefly, and Nathan makes it clear he’d like to see Zach again. Could it be that it was a one-in-a-million good time, or can they catch lightning in the bottle again?

It’s better. So good they don’t want to stop seeing each other, but they hardly know one another and it’s terribly awkward that they have barely more than revenge sex and an ex between them. Still, they think it would be okay if what develops is a rebound fling. And it sort of is. Until it’s more. And that just eats Jake alive when he reaches out to try to repair the breach with Zach. And then tries to manipulate both Zach and Nathan into a fight.

I really liked the in-depth discussions regarding trust, and the lack of it, that Nathan struggles with regarding relationships. He’s had two serious boyfriends who were cheaters–and when Zach is late or can’t make a date, he’s almost certain that’s just Zach messing around on him. Not that it should matter if they aren’t that serious. But, somehow along the way this got serious for both of them, and Zach has a fun and sexy way of working on Nathan’s trust issues. Expect a bit of bondage, some highly inappropriate projector room shenanigans, a scheming ex, and so much sexytimes the book needs a fire extinguisher. I loved it.

Interested? You can find NINE-TENTHS OF THE LAW on Goodreads and Amazon (US and UK).

Click on this Rafflecopter giveaway link for your chance to win a backlist book from LA Witt.
Good luck and keep reading my friends!