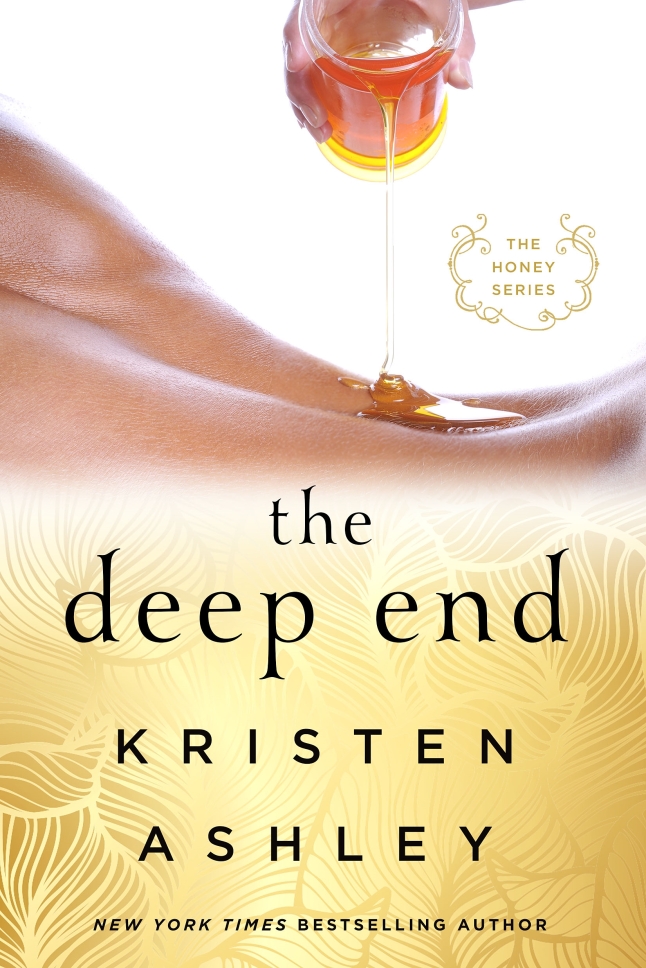 About the book:
Enter a decadent sensual world where gorgeous alpha males are committed to fulfilling a woman’s every desire…
Olivier isn’t sure what he’s gotten himself into when he joins the Honey Club, only that a dark part of him hungers for the lifestyle offered by this exclusive club. Here, no boundary will be left untested…and one’s deepest fantasies will become an exquisite reality.

When Amélie invites Olivier to surrender, she gives the alpha submissive what he craves. Soon they both find themselves falling harder than they ever anticipated—but as their connection deepens, the truth about Olivier’s past could destroy everything…

Gripping and seductive, The Deep End is the first book in a sensational new series from bestselling author Kristen Ashley.

She turned back to him. “You seem to have a good deal of stamina.”

“Amelie…Mistress, I don’t think you’re getting’ that I seriously find you not hard on the eyes.”

She bent closer, as intended for this part of their session, some of her fair falling on his chest in another caress. She did this letting her amusement show, if not all of the emotion she felt at his compliment.

“I wonder, mon chou, if you think you can butter me up with compliments.”

“I don’t know. Maybe. Though not sure why I’d bother since I didn’t give you one and you just made me shoot a huge-ass load the like that have never come from my cock.”

“And he gives another compliment,” she said through a smile.

“You earn it, I’ll say it, he replied, his lips twitching. “That is, if I’m physically capable of speech.”

She was still smiling when she reached out a hand and delicately traced circles around his nipple.

“You’re of course aware I should do something about you being so audaciously cheeky.”

Another darkness crossed his face. “What?”

“I shouldn’t allow you to be cheeky with me.”

The look fled. “You mean, in uppity, hot-chick speak, a wise-ass.”

“She’s got a pretty laugh, too, to go with that pretty accent,” he murmured and she saw his eyes on her lips.

I could get lost in this one, she thought. Lost and never found.

Interested? You can pre-order THE DEEP END in advance of its March 7th release on Amazon, Barnes and Noble, iBooks, GooglePlay, Kobo, IndieBound, and BAM.

About the Author:
Kristen Ashley was born in Gary, Indiana, USA and nearly killed her mother and herself making it into the world, seeing as she had the umbilical cord wrapped around her neck (already attempting to accessorize and she hadn’t taken her first breath!). Her mother said they took Kristen away, put her Mom back in her room, her mother looked out the window, and Gary was on fire (Dr. King had been assassinated four days before). Kristen’s Mom remembered thinking it was the end of the world. Quite the dramatic beginning.

Kristen grew up in Brownsburg, Indiana and has lived in Denver, Colorado and the West Country of England. Thus, she’s blessed to have friends and family around the globe. Her family was (is) loopy (to say the least) but loopy is good when you want to write. They all lived together on a very small farm in a small farm town in the heartland. She grew up with Glenn Miller, The Everly Brothers, REO Speedwagon and Whitesnake (and the wardrobes that matched).

Needless to say, growing up in a house full of music, clothes and love was a good way to grow up.