Hi there! I’m so excited to share a review for the newest contemporary M/M romance in Jay Northcote’s Housemates series. I absolutely loved HELPING HAND, LIKE A LOVER and PRACTICE MAKES PERFECT (which made my 2016 faves list!) so I couldn’t wait to get my hands on WATCHING AND WANTING. This book features a love story for a confused and closeted bisexual man whose world expands watching the live cam shows his sexy new housemate makes for his living.

About the book:
Watching Jude’s cam show stirs desires Shawn’s always denied…
Shawn is adrift. Recently graduated, he’s stuck in a dead-end job that barely pays the bills. His girlfriend dumped him, his friends have moved on, and he’s still in Plymouth—going nowhere.

Jude is a student living in the same shared house. Out and proud, he’s everything Shawn’s been running from since he hit puberty. When Shawn discovers Jude works as a cam boy, he can’t resist the urge to watch one of his shows. It makes Shawn want things that scare him, yet his fascination forces him to confront his attraction.

Keen to explore his bicurious side, Shawn suggests they do a show together. Jude agrees, and things get complicated—and kinky—fast. But Jude isn’t looking to get involved with someone so deep in the closet. If Shawn’s going to get what he wants, he needs to find the courage to stop hiding from himself and be honest about who he is.

Back in the living room, he threw himself into his armchair again. The TV was on, showing an old episode of Prison Break, but Shawn wasn’t paying attention to it. Sunk in a black hole of despondency, he gazed surreptitiously around the room at his housemates instead.

Jude, one of the new guys who’d moved in last month, sat in a corner of one of the sofas doing something on his phone, his dark curly head bending low and the glow of the screen lighting up his angular features. Shawn wondered what he was doing—probably hooking up on Grindr or something.

That twist of discomfort flared in his gut again. He knew he shouldn’t care. It was none of his business, but the idea that Jude might be planning some hook-up with some random guy lodged in his consciousness like a stone in a shoe. Maybe it was just because Shawn was single again and would have to get back to hooking up if he wanted any action. The idea of being back on Tinder wasn’t as appealing as it should be.

Shawn turned his attention to the other sickeningly happy couple in the room. Ewan wasn’t technically one of Shawn’s housemates. He lived next door, but he might as well have moved in for the amount of time he spent there with Dev. Ewan had his arm around Dev, and as Shawn watched, he turned his ginger head and murmured something in Dev’s ear. Dev turned to look at him and they exchanged a soft smile. Then Dev pressed a kiss to Ewan’s lips, which lingered long enough to make Shawn uncomfortable.

Irrational anger bubbled up, spilling out of his mouth before he could hold the words back. “For fuck’s sake. Can’t you save that for your room?”

Dev pulled away quickly, his cheeks flaming. “Sorry,” he muttered.

Shawn shrugged and glared back. “I just don’t need to see it, that’s all.”

“Well, the television’s over there, so stop fucking looking at us if you don’t like it. It was just a kiss. It’s not like we’re blowing each other on the sofa or anything. Jesus.”

“Ugh. And thank you for that mental image.” Shawn did a mock shudder.

“Whoa, Shawn. What the hell’s wrong with you tonight?”

Jez’s voice cut through Shawn’s drunken, angry haze, and he realised that all eyes in the room were on him. He caught Jude’s gaze, curious and assessing, and flushed at the unwanted attention.

“You should be used to it by now,” Jez continued. “You’ve lived with me and Mac long enough. And I’ve totally caught you groping Beth on the sofa before. You don’t get a free pass for living room shenanigans just because you’re the only straight couple in the house since Dani moved out.”

That was the spark that ignited Shawn’s anger past the point of no return. “Yeah? Well, maybe I’m just tired of being surrounded by all the gay in here. I never signed up for this when we moved in together.” He stood, sloshing beer out of his nearly full bottle and onto the carpet. “I don’t have to like it.”

“Feel free to find somewhere else to live, then.”

Even Jez, who was rarely moved to anger, sounded pissed now.

“Yeah. Maybe I will.” Shawn stormed to the door, careful not to ruin his exit by walking into the coffee table again. “Oh, and for your information? Me and Beth split up today, so we won’t be the token straight couple any more.”

He slammed the door behind him and stomped up the stairs to his room on the first floor. He slammed that door too, but it didn’t make him feel any better. After throwing himself down on the bed, he clutched his pillow and let harsh sobs of fury burst out of him until the red mist receded and shame and guilt crept in to fill the place where his anger had been.

My Review:
Shawn is a young and adrift. He’s recently graduated from uni, but unable/ unmotivated to find a better job than his part-time work at a pharmacy. His girlfriend has just broken off their long-distance relationship and he’s pretty mad with the world. It makes him lash out at his housemates, who are all happily coupled men with loving partners. Jude is a newcomer on the scene, and doesn’t know what to make of Shawn’s outburst; he’s happy in the house with the two gay couples. Jude’s gay, too, but he’s not dating anyone. Instead, he runs a live cam show two or three nights a week for cash.

It’s not long before Shawn stumbles into Jude’s room during one of his cam shows–and gets a fantastic look at all of Jude’s sexy assets. And, well, that gets Shawn’s wheels turning. He logs on to Jude’s show, and is mortified to find that he’s totally aroused watching Jude winding himself up and down and up again before going off for his fans.

In fact, Shawn reaches out to Jude for some advice. Under the auspices of learning how to be a cam boy for cash, Shawn gets Jude to touch and kiss him–and confirm that yes, he’s more than bi-curious. Jude’s afraid to really fall for Shawn, despite their obvious chemistry. Working the cam with a “straight” partner is so well accepted by his fans that their tips pretty-much triple, but it’s not all cool. Jude feels frustrated that Shawn’s denying their interactions to his housemates–because he’s afraid to come out. And that sidetracks what’s building between them. Still, Shawn knows how to apologize, and they talk it out–especially when Shawn makes the choice to not hide his attraction any longer.

As with all the books in this series, the guys are good and fun and sexy. The love story is rich with excitement, and anxiety and lust, with healthy helpings of voyeurism and scorching sexytimes. Shawn makes an acceptable apology, complete with grand gesture–and Jude’s happy to accept his love. I really felt the bi-curious/bisexual aspect was handled well, and the cam shows…whoa! I’m totally gone for the Housemates series and just hope there’ll be more and more future stories.

Interested? You can find WATCHING AND WANTING on Goodreads and Amazon (US or UK). 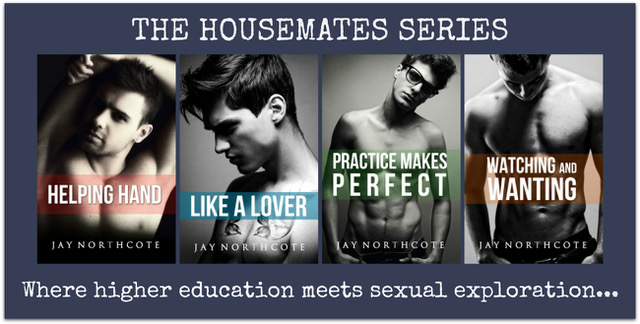 2 thoughts on “Getting Past WATCHING AND WANTING–A Review”