Hi there! I’m still clearing the TBR Pile, and so this week I’m reviewing the final book in the contemporary M/M Australian cowboy romance Red Dirt Heart series from NR Walker. I’ve shared reviews of RED DIRT HEART, RED DIRT HEART 2 and RED DIRT HEART 3 previously. RED DIRT HEART 4 is such a beautiful end to this series that I almost didn’t mind letting Charlie and Trav go off into their glorious sunset. Almost. 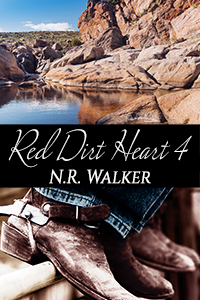 About the book:
Moving from a Texas ranch to an Australian Outback station was a life changing decision for Travis Craig. Though it wasn’t really a decision at all. Something in his bones told him to go, though he had no clue as to why.
Until he met Sutton Station’s owner, Charlie.

But Travis knew all along it’d be worth it. He knew the man with the red dirt heart was destined to be his. Just like he knew the red dirt that surrounded him was where he was supposed to be.
In the final instalment of the Red Dirt Series, we see Charlie through Travis’ eyes. We see how much he’s grown and how much he loves. We go back to Texas with them, and we see Charlie get everything he truly thought he never deserved.

Red Dirt Heart 4 is Travis’ story.
And this is the story of not just one red dirt heart, but two.

My Review:
This is the final novel in the series, and wraps up all the stories nicely. What I didn’t know when I bought the book, and was most pleased to learn the second I opened it? Travis is the narrator. All three previous book were from Charlie’s point-of-view.

Charlie and Travis have been together for over two years now, and–risking a spoiler–Travis had proposed to Charlie at the end of the previous book. Charlie had accepted, knowing that same-sex marriage is not recognized in Australia. So, there was no pressure for a wedding to happen anytime in the near future. That was okay with Travis. He only wanted Charlie to agree to marry him, in principle. But now, a clear year after that one isolated conversation, Charlie’s gone and told his younger brother that they were engaged. And Travis wants to know why.

It’s simple. Charlie Sutton works on his own pace, and don’t you try to budge him from it. Also, it means he’s been ruminating on the idea, and Travis likes it when Charlie ruminates. As their lives get more wrapped in their station family, Charlie decides to branch out. Invite some “local” (in their case a 3 hour drive away) kids to come out and help work the station a bit, see if any of these kids might have an affinity for ranching. Many of his fellow cattle farmers are selling their lands, because the farming’s too difficult or they have no children to leave it to, or their kids don’t want it. So, part and parcel with Charlie’s ruminating on marriage is this idea of legacy. Charlie’s frustrated that he doesn’t have an easy path to building a legacy–because even if he and Travis were married, they aren’t legally able to adopt on account of being gay.

Those are some of the themes masterfully crafted into the book. I really just adore this couple, and it was fun to be inside Trav’s head the whole time, as he dug into Charlie and figured out what was buried deep into his thought-process. This book brings us on a trip Texas, and Charlie meeting Trav’s parents the first time–which is a sweet and tense time for all. I really loved watching Trav go all protective when he thought Charlie had been wronged, and throughout the pages there’s an unwavering affection to Charlie and his quirks.

I couldn’t even be sad that this is the final book in the series, because it was so upbeat, and had so much great stuff going on. The final fifty pages is an epilogue that assures the reader Charlie and Trav have the fullest life one could imagine, and find their happiness for a lifetime under that great big sky treading that silty red dirt.

We should all be so lucky.

Interested? You can find RED DIRT HEART 4 on Goodreads, Amazon, and Barnes & Noble. The first book in the series, RED DIRT HEART, is only $.99 at Amazon. Talk about a steal.

Thanks for popping in, and keep reading my friends! Also, tell me what books are languishing on your TBR. Maybe we can do a buddy read!

One thought on “TBR Thursday! RED DIRT HEART 4–A Review”