Hi there! Today I’m sharing a release day review of a new contemoprary romance from Donna Grant. THE PROTECTOR is the second book in her Sons of Texas series, and features the youngest son, a Force Recon captain named Cullen, on his mission to track down his missing father. You really need to read THE HERO to understand the whole series. 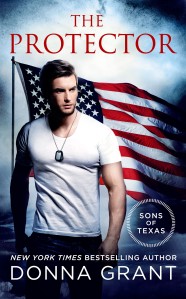 About the book:
When Marine Force Recon captain Cullen Loughman learns that his father’s been kidnapped, he will do whatever it takes to find him. In order to achieve his mission, Cullen will need to team up with the best of the best—someone who just happens to be the most stunning woman he’s ever laid eyes on…

This isn’t the first rodeo for ex—Air Force pilot Mia Carter. Still, Cullen’s bad-boy good looks and charm are distracting her from duty. . .and it appears that the feeling is mutual. As Mia and Cullen make their descent into a dark, dangerous world, their attraction reaches the boiling point. But is their desire worth the risk when a ruthless enemy is waiting in the wings—or will their Lone Star love conquer all?

Cullen hadn’t expected Mia Carter to be so . . . amazing. He’d never seen a woman fight with such passion or with movements so beautiful that he’d found himself watching her instead of finishing off the Colombian.

For the first time in Cullen’s life, he couldn’t find words. He could only stare at the beautiful woman with one thought—Valkyrie.

She was the epitome of what he imagined the winged creatures of Norse mythology would look like. All she needed was armor and a sword to complete his vision.

Now, as he sat in the cockpit of the British WWII Bristol Buckingham C. MK 1 plane, also known as the Bristol Type 163 Buckingham, he couldn’t keep his eyes off her.

Beautiful didn’t begin to describe this incredible woman. Every time her steely black gaze fringed with impossibly thick lashes turned his way, he became entranced. Her eyes were large and slightly tilted up at the corners.

He forgot to breathe as he took in her unblemished, sun-kissed face. With high cheekbones and wide, full lips, he was smitten.

Wisps of inky black hair escaped from her ponytail to fall along the narrow column of her neck. An olive tee skimmed her torso to show mouthwatering curves, and black denim showcased her lithe legs to perfection.

“It was Orrin who approached me,” she said.

That didn’t surprise him. His father had always had a gift for finding talent and using it to his advantage. “When?”

It made Cullen wonder what else his father had been up to. While he and his brothers were off building their lives, Orrin Loughman had been setting up a team of Black Ops members to do some of the dirtiest jobs.

One of the missions, put together by the DOD, had sent Orrin and his team to Russia to steal a bioweapon.

Except something had gone terribly wrong. Someone betrayed Orrin Loughman. In the process, he’d been kidnapped, and his team was executed.

The last person to see his father was the woman sitting next to Cullen.

The years he’d spent as a Marine Force Recon captain had taught him many things. He knew how to fight his way out of various situations using his hands, body, and mind. He knew how to spot liars and traitors. He also had dozens of rescues to his name.

He was damn good at his job. But he had to be more than good now. His father’s very life depended on it.

“I went to the Air Force Base. When you weren’t there, I went to General Davis’s office. It seems they keep a record of every flight you make.”

Her lips compressed. “That they do.”

“To my benefit. If I hadn’t arrived, you would either be dead or in Camilo’s care. Neither of which sounds appealing.”

“I already thanked you.”

“Yes, ma’am. You sure did.” He linked his fingers over his stomach. There was something about Mia Carter he found compelling, and it had nothing to do with her beauty. She was very much like him, he suddenly realized.

Wary of the world with a look of cynicism she didn’t bother to hide.

“Tell me how a pilot with your skills is able to have a hangar on a base, work for the military as a contractor, and still be able to take jobs with criminals. Because let’s be honest . . . Camilo was a criminal.”

“It won’t matter what I give you as an explanation. You’ve already formed an opinion,” she replied coolly.

In fact, he had formed an opinion. He suspected that she liked danger. She also loved to fly. Combine the two, and she was in heaven.

“You were telling me about how you and my father began working together,” he said, getting them back on topic.

She cut him a look with her black eyes. “What you really want to know is if I betrayed him. As I told Callie—and everyone listening on the phone that day—it wasn’t me.”

“I do remember that call. Though I’ve learned that people say a lot of things that aren’t the truth.”

“You want the truth?” she asked, turning her head to him. “I’ll tell you the truth. I hated taking orders, so I left the Air Force as soon as I could. But I wasn’t ready to give up flying. It’s my life.”

That much he could tell. It was in her blood.

My Review:
In The Hero, the first book in this series, we met the Loughman family, or what was left of it. Orrin is father to three sons, Wyatt, Owen, and Cullen. Twenty years ago his wife was muedered. Orrin, being a Navy SEAL, suspected Melanie’s death stemmed from his work in secret missions, but her killer was never found. Orrin’s sons didn’t recover well, their family splintered, but each boy followed their father’s footsteps into military service, even if neither of them had oaken to him in years. These days Orrin runs a private Black Ops team for classified missions.

Without warning Wyatt, Owen and Cullen were pulled from their missions and dropped at their Texas reach, only to discover their aunt and uncle murdered, and their father kidnapped. He’d recently been tasked with recovering Ragnarok, a bioweapon developed by a Russian scientist. Only the pilot, Mia, and Orrin had survived. Mia got the weapon transferred to Orrin’s right hand gal, Callie, and his three sons are on the hunt for their father.

Cullen tracked Mia to a job-going-wrong situation in Florida. He knows Mia is his best bet on getting Intel to find his dad. Over the course of several days Mia and Cullen learn that the Saints, a shadow organization responsible for Ragnarok’s development, have eyes, ears, and guns everywhere. Including the Air Force base Mia flies from. The place where Orrin’s team of men had been slaughtered. It’s not safe for them to remain, and their escape is none-too-easy. Good thing that Mia’s made some incredible allies. Cullen is most impressed. And, injured. Cullen is gravely injured.

Meanwhile, Orrin is receiving help from two unlikely sources, help that’s keeping him alive. He’s been beaten, starved and battered nearly to death, but he’s determined to see his sons in person once more–and take down the Saints, if he can. The bulk of the book is the search for Orrin, and that’s not resolved. Mia and Cullen do find a fierce attraction for the other, however, and that grows into affection under all the near-death pressure. We learn tons about the espionage, the Saints and the purpose for Ragnarok, but the story isn’t finished.

For one, Wyatt and Callie have to fall in love. And, the mighty mighty Loughmans need to save the day. I liked his book better than the first one, though I often felt the romance angle was pushed too strongly. I had trouble accepting all the internal dialogue, which often boiled down to lust, or mooning, when the situations were so dire. I love romantic suspense, and this book is getting closer to the mark, for me, though I think romance fans will be satisfied. Orrin’s a great character and I was glad to see him somewhat restored and on the trail of vengeance. His allies are unconventional, but just as fierce as he needs them to be. Looking forward to the resolution in the next book!

Interested? You can find THE PROTECTOR on Goodreads, Amazon, Barnes & Noble, BAM, iBooks, IndieBound, Kobo, Powells, and Tantor Audio. I received a review copy of this book via NetGalley.

One thought on “Engaging THE PROTECTOR–Release Day Review!”