Hi there! I’m getting the word out on a new contemporary M/M romance novella from Lila Leigh Hunter. TOW TRUCKS & NEW YEAR’S KISSES is a odd couple romance between a tow truck driver and the rich man he rescues on NYE.

Catch the excerpt b elow and be sure to enter the book giveaway, too! 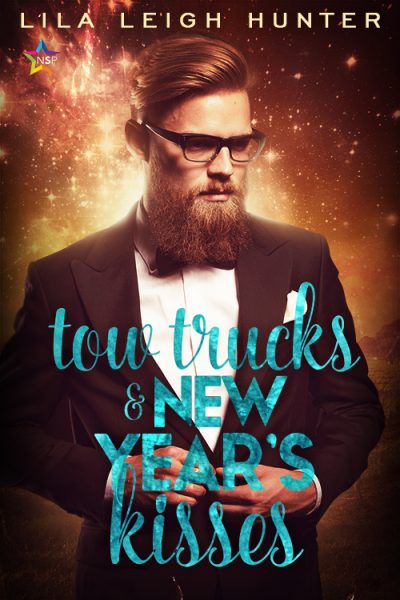 About the book:
A Jag with out-of-state plates is the last car Scott DeLaney expected to find when answering a tow call as a favor to his drunken godson. But, the tall man in the fedora seems like a nice reward until Scott finds out the stranger’s destination. Yes, he’d take care of the brooding man, but he has a selfish reason for it.

Finding himself in a ditch after dodging a deer is the least of Patrick Samuels’s problems when his rescuer arrives, wearing a tuxedo and driving a hot pink flatbed. Perhaps his older brother’s scheme will benefit Patrick after all.

Who knew that a New Year’s kiss is far more efficient than any boardroom strategy to seal a deal?

The rumble of an engine brought him back to his cold predicament. He adjusted his fedora and covered his mouth with his scarf as he moved closer to his brother’s Jag to signal the newcomer. It had been thirty-nine minutes. At least they had arrived before he froze his balls off. The truck lights illuminated the area, making Patrick cover his eyes. It took him a moment to readjust to the dark night after moving out of its reach. The flatbed was better than he had expected in a small town in the Valley. He did a double take when he realized it was hot pink, not exactly your everyday color. Well, that’s what he could see without being blinded again, anyway. The driver’s door opened, and Patrick moved closer. Before he could acknowledge the driver, Patrick ran out of words. A tall man in a well-tailored tuxedo stepped out of the truck, the lights reflecting on the shiny tips of his dress shoes. Patrick continued to gawk since the man was putting on some type of dirty work coat. He moved even closer, wanting to examine his savior’s features. They seemed to be about the same height, but the trucker had broader shoulders. Patrick was mesmerized by the geeky glasses and the long beard that concealed a hint of a smile. He wanted to run his tongue over the man’s thin upper lip and feel the coarse hairs partially hiding it.

The thwack of the closing door startled him back to reality, and the knowing smirk on the other man’s face made his body warm up for the first time that night. “About time,” he said, trying to cover his discomfort. He followed the trucker’s movements as he checked the time.

“I quoted you forty-five minutes, Mr. Samuels. I arrived with three minutes to spare.”

“Yeah, whatever,” Patrick said over his shoulder as he made his way back to the car. “You know you’re a little overdressed to respond to a tow call, right?”

“You’re correct, Mr. Samuels, but my superhero cape is at the dry cleaners. The tux will have to do for now.”

Patrick turned to berate the smartass but collided with him instead. The trucker held Patrick’s biceps, preventing him from falling, and once again, Patrick stared at the man’s lips. He shook his head to break the connection and winced at the pain instead. The cold and the bruises were getting to his brain

“You need to be careful, Mr. Samuels. You don’t want to hurt yourself any further.” The tow driver released one of Patrick’s biceps and traced Patrick’s bruised cheek with a long, cold finger.

Patrick shivered and immediately pulled away from the wanted but unnerving touch. “If you’re done manhandling me, Mr…”

The vibration traveled all the way to Patrick’s cock and back up to his nipples. The cold had been forgotten too. Even so, Patrick couldn’t believe his traitorous body’s response to the man’s forwardness. Yeah, if they were anywhere else, he’d be the one propositioning Mr. Scott, but they were in the middle of the boonies, for God’s sake. He couldn’t be that desperate. After looking into those hazel eyes again, he might have to change his opinion.

“No matter how much I’m enjoying this, we need to get moving before we have to ring in the New Year inside the truck.”

Click on this Rafflecopter giveaway link for your chance to win one of three copies of the book up for grabs.
Good luck and keep reading my friends!

About the Author:
Lila Leigh Hunter is the pen name of a Puerto Rican author with a hyphenated surname. Born and raised on the island, Lila grew up making up stories her siblings pretended to like. But no matter what they say, as the youngest of six, she’s still their mom’s favorite. According to the dusty diplomas on her wall, she’s an architectural designer living in Southern Texas with her husband and four military brats.

She spends most of her free time writing homoerotic romances about middle-aged men finding happiness and the rest hiding from pesky house chores. When outside of her cave, she likes to observe people and try to guess their stories. Sometimes she wishes the voices in her head were real; going out with the boys in her books sounds like a plan made in heaven.