Hi there! Today I’m sharing a review for a new contemporary gangster romance from Jay Crownover releasing October 18th. HONOR is the first book in her Breaking Point series but features two characters from previous books: cold and calculating mob boss Nassir and the sexy stripper he fell for long ago, Keelyn.

Catch the excerpt and review below and enter the giveaway for a chance to win signed copies of all the books in the The Point series. 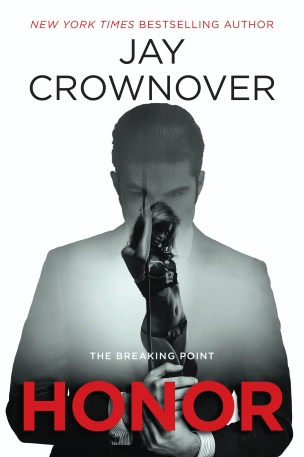 About the book:
Don’t be fooled.
Don’t make excuses for me.
I am not a good man.

The first time I saw her dancing on that seedy stage in that second rate club, I felt my heart pulse for the first time. Keelyn Foster was too young, too vibrant for this place, and I knew in an instant that I would make her mine. But first I had to climb my way to the top. I had to have something more to offer her.

I’m here now, money is no object and I have no equal. Except for her. She’s disappeared. But don’t worry, I will find her and claim her. She will be mine.

Like I said, don’t be fooled. I am not the devil in disguise… I’m the one front and center.

“What are you doing here, Nassir?”

Nassir Gates, half man and half monster. He was lethal and toxic, keeping all that sinister beauty covered up in a ridiculously expensive suit that made him look elegant and falsely civilized. To the untrained eye, Nassir was an outrageously handsome man that looked like he was on his way to a business meeting, but if you had spent any time on the streets, were familiar with life in the gutter, there was no missing who he really was, what he was. The top of the food chain. If you knew about what it took to make it where I came from, you could look at Nassir and see that he not only thrived in chaos, but was comfortable there. He even managed to make it look good.

I left all of that behind. I liked Denver. I liked the laid-back vibe. I liked the monotony. I liked the predictability. I liked that I could walk to my car after my shift at the diner and not have to worry about taking a knife in the ribs or getting a revolver shoved in my back. I liked that I didn’t have to shake my ass or get naked to pay my bills. I liked that here, soccer dads were just that, and weren’t secretly banging hookers in the back room or gambling the family’s grocery money away at an illegal poker game. Most importantly I liked that I didn’t have to look my biggest addiction, my worst temptation, in the eye every single day and pretend like I didn’t want him. Here I didn’t have to deny that I had been infatuated with him for years. I was foolishly obsessed with this particular devil in a designer suit and I knew he was absolutely detrimental not only to my safety but to the thing I valued above all else…my independence.

After a childhood spent evading the hands of my mother’s overzealous and unhinged boyfriends and barely escaping the clutches of a sick and twisted stepfather, and too many years working my ass off—literally—to make a life for myself, I could never risk letting myself care for Nassir the way I wanted to because I knew that if I did, I would become nothing more than his, and I refused to be any man’s possession or accessory.

When the opportunity arose to take off without an explanation or without looking like I was running from him and the promise and future I saw so clearly in his eyes, I grabbed it. Ran away with both my heart and my tail tucked between my legs. But now he was here in this fragile and predictable paradise and I wanted to stab him with the broken pen and jump in his lap and put my mouth on his smirking lips all at the same time.

This is the first book in a new spin-off series that carries two characters from The Point books into a whole new group of stories. Nassir Gates is the cold and enigmatic boss, ruthless and feared. He fell for Keelyn Foster the moment he laid eyes on her–on her first day working the pole at Spanky’s strip club. He didn’t care a bit about her assets; he was thrilled by the awe in her eyes.

Keelyn’s known that Nassir wanted her, but she was never ready to accept him, or his attention. She knew his reputation was well-deserved, even if she only understood the barest tip of what gave him that razor-honed edge. In a previous story Keelyn had been shot and Nassir saved her. It’s several months later that he meets her in her new hideaway life in Denver, and urges her to move back to The Point–back to him.

This has been a simmering attraction neither had ever moved on, until now. Nassir wants Keelyn to buy-in to his newest venture, a sex club, as a managing partner–and it’s an offer she can’t refuse. She also can’t refuse pressing all Nassir’s buttons and moving herself into his secluded mountain home. Things don’t go easy however. There’s lots of violent shenanigans, and each harrowing near-death escape further cements their lives together–if they probably won’t have a long life together, there’s not a moment to waste posturing and protecting one’s heart, after all.

The initial part of the book is an extensive history of Nassir, and his abusive, tumultuous childhood in the West Bank region of Israel. It certainly went a long way to humanizing Nassir–which I think best benefited The Point readers who likely had their hate on for Nassir. As I’d not read those books I found it a little overwhelming, and not essential. But that was me and I was a blank slate. I could have enjoyed Nassir without it, but it certainly made him a more well-rounded character. The Pinocchio references were very cute, and gave me smiles. There’s some sexytimes, but there’s a lot more hardship than happiness, though this one ends in a way that’s mostly positive.

It’s not easy loving a couple that’s bottom-of-the-barrel. Nassir is a death-dealer turned mafioso. He runs The Point, the fictional world where they live. It’s a city time forgot ruled by drugs, greed and crime. While there are admirable men and women who live here, Keelyn and Nassir aren’t counted among that number. Keelyn grew up quickly, and got out of her house before her step-father could rape her. Stripping was her saving grace, and her brief escape to Denver gives her new perspective: if she didn’t have Nassir guarding her every move in The Point, maybe she’d have needed another way out. Now that she’s a woman of means, she wants to provide that “way out” for women who were in her situation, or worse, and don’t want to sell their bodies to survive. Nassir grew up being a tool of revenge and his life is very different now. He makes his own path, controls his own destiny. When he can, he now offers his adversaries a choice to leave their criminal lives behind–thus removing his competition in a more humane fashion than he’d ever been offered. So, while these two start out as borderline despicable–mostly Nassir–they both make admirable choices. I think readers will really enjoy their story, which has lots of tough twists and some super bloody turns.

Interested? You can find HONOR on Goodreads, and pre-order it in advance of it’s October 18th release on Amazon (US, UK, Can, and Aus) Barnes and Noble, iBooks, and Kobo.

If you preorder HONOR you will receive a super sweet bonus scene that features both Rule and Bax…as well as their leading ladies. The scene will NOT be shared anywhere else. It will be exclusive to those who preorder HONOR and fill out this form.

Click on this Rafflecopter giveaway link for your chance to win a signed copy of the The Point series books.
Good luck and keep reading my friends!

About the Author:
Jay Crownover is the New York Times and USA Today bestselling author of the Marked Men and The Point series. Like her characters, she is a big fan of tattoos. She loves music and wishes she could be a rock star, but since she has no aptitude for singing or instrument playing, she’ll settle for writing stories with interesting characters that make the reader feel something. She lives in Colorado with her three dogs.

3 thoughts on “Coming Soon! Their Love Became HONOR–Review and Giveaway!”