Hi there! Today I’m sharing a review for a contemporary M/M romance that’s somewhere between YA and New Adult, recently published from K. A. Mitchell. BOYFRIEND MATERIAL is a kinda sweet story that’s best read after GETTING HIM BACK. 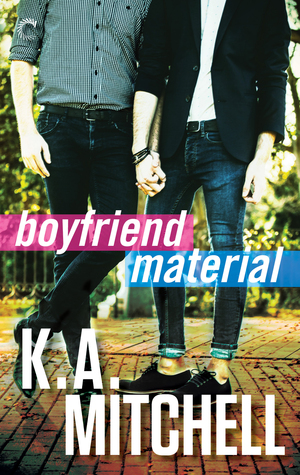 About the book:
Physically, it’s easy for Ethan and Wyatt to be together—well, if “easy” means stolen moments when Ethan’s roommate is away, or sneaking away to a hidden nook in the library. Privacy is hard to come by in a dorm, but finding ways to connect is half the fun.

Emotionally, though, that’s a different story. Wyatt isn’t sure if a relationship is something he can make last—years of having to hide his emotions have left him with a shaky sense of self-confidence. And when it’s time to head home for the holidays, their steamy on-campus connection may not translate so well to the real world…

My Review:
3.5 Stars.  This is the second book in a contemporary New Adult/Upper YA M/M romance series and likely best enjoyed when read in order.

Ethan and Wyatt are boyfriends on campus. Wyatt is a little older, been there for a couple years. Ethan is a freshman. The first book, which isn’t recounted at all, is all about them getting together. This book is all about the challenges of them building a relationship.

Wyatt is a “bad boy” in that he assisted in a large theft, in a stolen vehicle, when he was a young teen. Like 14-15. He was caught, tried, convicted and served 2 years in juvie. He’s from a Nowhere West Virginia Small Town where everyone is poor, and has been raised by his mother alone for his whole life. Ethan’s an only child from an upper middle class family. He’s honest, kind and patient, comfortable in his skin and sexuality, while Wyatt is reserved and mostly ashamed of many aspects of himself and his life. Wyatt has little experience with men, because he wasn’t sure he was gay, and didn’t want to become a bigger target by revealing his homosexuality. Now, with Ethan, he’s willing.

Ethan wants Wyatt to come home with him for Thanksgiving. And Christmas break. And, probably forever, but Wyatt is reticent. He knows/believes that he’s not boyfriend material, and doesn’t want Ethan’s family to reject him.

So, as far as the story goes, it was okay. I was a bit lost on some of the beginning, having not read the first book. As a devout serial reader, it is a pet peeve of mine when there is nothing to orient the reader to certain salient parts of the past in the new book. These are novellas, and a few sentences would go a long way to bringing fresh readers in, without too much repetition of the first book for those who’ve read that. Especially as this novella is told from Wyatt’s POV, and what a big switch that is, apparently, from the first book. Like, I have no idea what Waardenburg syndrome is–and I’ve got a Really Big Degree that certifies me to teach medical physiology. Wyatt suffers from it, and I barely got even a cursory description of what that meant, or how it affected his life. Heads up: it’s a genetic disease and means Wyatt’s partially deaf, and he has two different color eyes and brilliant white hair. His uncle has even greater penetrance and is totally deaf. Wyatt’s sensitive to his appearance, and how it affects those around him. He doesn’t want to be a curiosity, which is why he shies from contact with people, and hides behind a hoodie. All the time.

Ethan’s this sunny, “glass is nearly full” loving young man. He recently broke off from a relationship with a boy from his hometown–one who goes to significant lengths to make Wyatt feel uncomfortable–and he wants to crow out his good fortune at finding Wyatt, and getting Wyatt to love him. He is charmingly naive and starry-eyed. I’m glad he loves Wyatt, because Wyatt NEEDS someone to love him. I wish there was a bit more to this book. I know it’s a HFN, with a third installment promised, but I wanted there to be a bit more meat. Mostly it’s Wyatt worrying about the state of his relationship, and pushing away from Ethan before he can get his heart broken. It seemed a little juvenile, which is why I think it’s more Upper YA than New Adult. There’s sex on the page, and that was pretty good, but the overall vibe is still kinda young, IMHO. I also struggled with the mostly-telling narrative, and didn’t quite bond with Wyatt, as a result. It’s a quick read, though, and I might pick up the third book, if I had the time.

Interested? You can find BOYFRIEND MATERIAL on Goodreads, Carina Press, Amazon, and Barnes & Noble. I received a review copy of this book via NetGalley.

About the Author:
K.A. Mitchell discovered the magic of writing at an early age when she learned that a carefully crayoned note of apology sent to the kitchen in a toy truck would earn her a reprieve from banishment to her room. Her career as a spin-control artist was cut short when her family moved to a two-story house, and her trucks would not roll safely down the stairs. Around the same time, she decided that Chip and Ken made a much cuter couple than Ken and Barbie and was perplexed when invitations to play Barbie dropped off. She never stopped making stuff up, though, and was surprised to find out that people would pay her to do it. Although the men in her stories usually carry more emotional baggage than even LAX can lose in a year, she guarantees they always find their sexy way to a happy ending.