Hi there! Today I’m sharing a review for a brand new space opera/sci-fi adventure by a brand new author, Adam Quinn. If you’ve liked sagas like Star Wars and Star Trek, you might could be interested in FLASHPOINT. 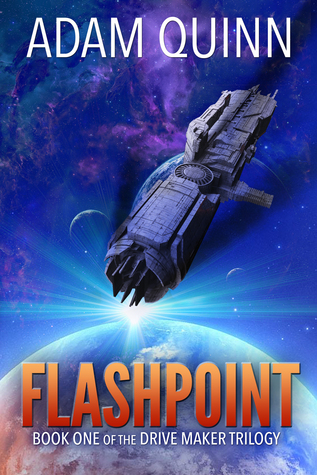 About the book:
Guilt-ridden over her role in the cataclysmic Order War, Taylor Ghatzi decided to retire from galactic politics and dedicate her life to the Emergency Service—until a deadly terror attack strikes her home world, and she may be the only one able to unravel the mystery behind it.

Meanwhile, Cherran DeGuavra, the son of the most important statesman in the past century, gave up on trying to reunite the galaxy frayed by his late father’s greatest mistake, but now must call upon all of his diplomatic powers to prevent it from tearing itself even further apart.

With the galaxy’s powers on a war footing and their own government obstructing them, Taylor and Cherran may need to start a fight to prevent one.

My Review:
This is the first book in a sci-fi space opera trilogy and is an excellent first book by a young author.

The galaxy is still healing from the Order War which claimed billions of lives in the quest for freedom from the repressive Galactic Government. Ten years ago marked the final battle, and General Taylor Ghatzi, a powerful telekinetic female humanoid, was on the front line at the point of the Pyrrhic victory. It’s where Taylor lost her friend and partner, Prince Steve.

Now, the galaxy is splintered into several factions, some systems under better (Meltian Empire) rule while others were in worse (Kaleknarian Empire) control. On Icarus Day, the annual remembrance of the final Order War battle, Admiral Ghatzi is caught is a deadly battle with fire-throwing telekinetics (aka Firestormers) from a rebel organization calling itself the Alliance. She’s able to save many, due to her quick thinking and quicker reflexes, including Hezekiah, her second in command. Hezekiah is a man she might find some solace with, if she wasn’t his commander, and if he doesn’t get killed first. Hashing out the goals and leadership of the Alliance is as high on Taylor’s list of priorities as is preventing any movement that could tip the precarious galactic power structure into war.

Cherran DeGuavra is a Meltian diplomat charged with filling his father’s large, and powerful, shoes in keeping the balance of peace in the galaxy. He’s all about the appearance of calm, knowing that a single misstep could be seen as aggression in PanGal, the loose association of ambassadors from all the empires. That the Kaleknarians have aggressively occupied Tracsion, the only system planet that mines flip-drive powering tracsionite, is a move toward war. Cherran also believes the Meltian government is not as cohesive as the president would like–specifically Ryan Harrison, chair of the Defense branch, seems to have far too many secrets, and some odd over-reaching goals, for a peacetime commander. That Harrison wants to send a powerful contingent of warships to liberate Tracsion, as well as take out colluders to the Icarus Day attackers–the small rebel Jacobian organization–is also suspect, especially for Admiral Ghatzi. She believes Harrison may be protecting the very people behind the attack, using his political will to take out rival organizations.

The stage is set for battle and it’s up to Taylor to navigate the frontlines with caution, and competence, while Cherran works his diplomatic magic–both endeavoring to maintain the peace, free the oppressed, and figure out Harrison’s angle. It’s a tense book, with several battles and skirmishes spanning what amounts to roughly two weeks’ time. Through the dual POV, Taylor and Cherran, we get both the political and the tactical sides of the experience, and there’s a tiny dash of romance–Taylor definitely has feelings for Hezekiah, which seem to be reciprocated. I expect the next book will explore this relationship as it develops from genial commander-subordinate to a more equality-type romantic one. I liked the action and the adventure of this galaxy, and the creativity of the many factions. The political intrigue was also good, but a little harder for me to follow with Cherran’s POV, compared to the investigation being run by Taylor and her commander. It think this is an inherent problem with the shell-game that is politics, than with the author’s skill, however. It’s always a tough piece to write, and to understand, when the characters can’t see the full picture due to elaborate subterfuge by the main antagonist, in this case Harrison.

Still, I really enjoyed the book. I’m a fan of adventure sagas, and this one’s definitely headed in a great direction, with Harrison’s main objective still a bit murky, and Taylor, Hezekiah, Cherran and others keeping very close tabs on him. It’s unclear if Harrison’s a mastermind, bent on ultimate galactic control, or a puppet whose nefarious projects have taken on their own new and dangerous roles. There are so many characters, it’s a little hard to track everything, but I found the pace to be good, with little down-time. The goals are always for peace, even if some battle is necessary to achieve it. Taylor’s battle scars are not only physical, she still suffers nightmares of her time in the War; and her growing affection for Hezekiah is scary–she doesn’t want to lose another lover, like she did with Steve. It’s endearing. I’m anxious to see how all of this plays out in the coming books. A great first book in a series, and one I’ll continue to follow, for sure.

Interested? You can find FLASHPOINT on Goodreads and it’s on sale at Amazon for $.99.

2 thoughts on “Galactic Battles at the FLASHPOINT-A Review”