Hi there! Today I’m sharing a review for a contemporary YA romance from Laura Diamond. UNDER MY SKIN brings together two teens who are survivors of loss–a heart transplant recipient and the twin sister of the heart donor. It’s interesting, but has flaws. 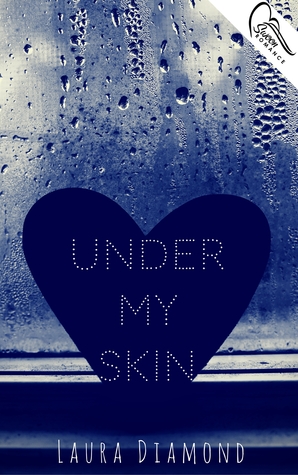 Bookish Brit Adam Gibson is one wonky heartbeat away from a fatal arrhythmia. But staying alive requires Adam to become keenly focused on both his pulse and the many different daily medications he must take in exactly the right dosages. Adam’s torn between wanting to live and knowing that someone else must die in order for him to do so. He needs a new heart.

The pressure is getting to him. Adam stops talking to his friends back home, refuses to meet kids at his new school, and shuts his parents out entirely. His days are spent wondering if can cope with having a dead man’s heart beating inside his chest, or if he should surrender to the thoughts of suicide swirling around in his head.

And then a donor is found…

Outspoken artist Darby Fox rarely lets anything stand in her way of achieving her goals . Whether it’s painting, ignoring her homework (dyslexia makes a mess out of words anyway), kissing a hot boy she doesn’t even know, or taking the head cheerleader down a peg , no one has ever accused Darby of being a shy. She also happens to be the twin sister to a perfect brother with good looks, good grades, manners, and the approval of their parents – something Darby has never had.

Darby’s always had bad timing . She picks the worst time to argue with her brother Daniel. In a car with bald tires, on an icy road in the freezing cold, the unthinkable happens. In a split-second, everything changes forever.

3 Stars for this contemporary YA romance.

Adam is a 16 y/o Londoner living in New York. His family had relocated to the US because Adam has an unspecified heart condition that is worsening to the point that he’s too sick in general, but not sick enough to be prioritized on the heart transplant list. He lives in some upstate NY town that has a really great heart transplant team…wherever that is. Adam is severely conflicted about his condition. He sees the struggles his parents are enduring, and hates witnessing their suffering on his behalf. As his heart function precipitously declines and he’s hospitalized, he has no faith that he’ll receive a donor heart in time, and wonders if he even deserves to get one. He’s just a kid, and has no outstanding qualities. His manipulative counselor, Dr. Shaw, believes Adam is depressed, and strongly hints that he’s suicidal. It’s borderline abusive, and I had serious problems with Dr. Shaw’s ethics and actions throughout the book.

Daniel and Darby Fox are fraternal twins. While Darby is a talented artist, she struggles with school due to severe dyslexia. She’s also an impulse free spirit. Daniel is a stellar student and champion athlete. Darby feels their parents favor Daniel in everything, though she dearly loves Daniel. He’s a great guy. The blurb already tells readers that Daniel dies and Adam gets his heart. It’s really sad. I agree.

Adam and Darby meet in the hospital and hit it off. Darby was severely injured in the car wreck that killed Daniel. Adam is currently recovering from his transplant. Neither really wants to discuss their medical issues–Adam is still conflicted, and not sure how to handle the physical issues he’s now experiencing. A racing heart was a sign of trouble–now he’s being tested with all sorts of exercise, and he’s getting panic attacks. Dr. Shaw’s manipulating him, and her new medications for his depression and anxiety are freaking him out. He can’t discuss his fears with his parents, as they think he’s as suicidal and Dr. Shaw says. Darby is a breath of fresh air, but Dr. Shaw does some completely unethical things that keep them apart.

I think I’d have liked this story a whole lot more without Dr. Shaw. As a person who has worked in the medical field a long time, I understand that the machinations in this book would be enough to get a physician severely reprimanded, if not have her license disciplined or revoked. It created a whole lot of unnecessary drama, in a story that was already rife with conflict and complications.

Both Darby and Adam are riddled with survivor’s guilt. They have long-term medical issues. They have parental issues. They have survived serious illness and injury. That’s a lot. Then, they meet a person who might make all their suffering fade, just a bit. And–instead of fostering connection and openness–the psychiatrist breaks anonymity, reveals her own inner traumas to teens, and prescribes medications that the patient has trouble taking. Oh, and she’s really, really antagonistic. I’ve been in therapy sessions. Never has the psychiatrist acted so rashly, brashly and foolishly as this caricature. I understand the author is a psychiatrist; if she was presented a case file of Dr. Shaw I wonder if she’d recommend her be sanctioned. I sure would, if she treated my son like Adam was treated.

The end is tied up too neatly. The only upside I found was Adam got a new therapist, and his parents were made to understand some small degree of the fallacies they’d been fed by Dr. Shaw. It seems like Darby and Adam will be getting along, perhaps having some romance. I wished I had had more of that story, and less of the freaky shrink completely messing Adam around.

Interested? You can find UNDER MY SKIN on Goodreads, Amazon and Barnes & Noble.

Laura Diamond is a board certified psychiatrist currently specializing in emergency psychiatry. She is also an author of all things young adult—both contemporary and paranormal. An avid fan of sci-fi, fantasy, and anything magical, she thrives on quirk, her lucid dreams, and coffee. When she’s not working or writing, she can be found sniffing books and drinking a latte at the bookstore or at home pondering renovations on her 225 year old fixer upper, all while obeying her feline overlords, of course.