Hi there! I’m so excited to get the word out on a contemporary M/M romance from Deanna Wadsworth. TOO GOOD TO BE TRUE is the fifth book in her 1Night Stand series, but it’s easily enjoyed as a standalone

Catch the excerpt and book giveaway, below! 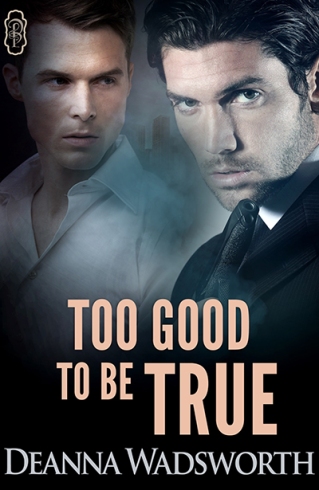 About the book:
Disgraced former FBI agent Tim Burkhart desperately wants to reclaim his life and find happiness. Relocating his fledgling private security company to Miami—where his ex-wife moved their two daughters—hopefully is a start. When he’s hired to provide protection for an antiques dealer on his way to Scotland to sell a priceless ancient dirk, Tim believes the break he’s been waiting for has finally arrived. Maybe now he can make enough money to hire a lawyer and get shared parenting of his little girls.

Elliot James runs the antique shop he inherited after his grandfather’s death. Lonely and swimming in debt, he longs for a way to turn his life around but keeps making one mistake after another. Then he finds the ancient dirk tucked away among junk as he’s cleaning out his grandfather’s home. Placing it up for sale, he is thrilled when an out of country buyer purchases the priceless antique. The buyer wants the dirk immediately and sends Tim to ensure Elliot safely delivers it on time.

The moment Tim and Elliot meet, however, everything falls apart. Between break-ins, shoot-outs, stalkers, totaled cars, and the cops, it seems Tim and Elliot will never get to Scotland by the deadline. Despite all the obstacles, an unexpected attraction pulls them together, offering each man a glimmer of hope. But if they don’t deliver the dirk on time, they won’t get paid and neither of them will be able to pick up the pieces of their lives.
Will they complete this job and find a happily ever after, or is all of this really too good to be true?

Staring down the sights of his Colt 1911 and into the panicked eyes of the young man, Tim said, “Keep your hands where I can see ’em. I want to know where Mr. James is and why you’re in his store.”
Out of the corner of his eye, Tim saw a flash of metal. Instinctively he dropped to the floor. The sharp crack of a bullet shot through the store, shattering something on his left.
The guy behind the counter made a run for the door.
Tim rolled behind the armoire, gritting his teeth when the door slammed shut and the first guy got away. Careful to stay out of sight, Tim assessed the shooter who’d come from the back room. He looked as young and inexperienced as the one who’d run. Tim recognized the weapon in his hand—a 9mm semi-automatic Beretta. Though Tim’s .45 could out-shoot the little pea-shooter at the range, he had no interest in finding out who was the better shot in real life.
“¿Adónde vas? ¡Esperame!” the shooter yelled to his retreating friend.
Wait for me. Tim knew enough Spanish. The guy planned to make a run for it, too. He clambered to his feet. Before he could tackle and subdue him, the kid aimed his Beretta in the general direction of the armoire and fired off a volley of shots.
“Shit!” Tim dove behind a stack of rugs to dodge the bullets.
The gun went silent.
Tim rolled fast onto his back, his 1911 aimed, only to watch the kid flying out the door behind his friend. The door bounced a few times until it closed, the bells clanging.
“Shit! Shit!”
The scraping sounds in the back room, louder than before, drew his attention once more.
As fast as he could, he crept around the counter, his heart pounding. Both hands on his gun, trigger finger resting on the frame and trigger guard, he took a quick peek into the room, ducking back before a possible third perp could make him.
In less than a heartbeat, his brain registered what he’d seen. He exhaled. Keeping his gun lowered but at-the-ready, he entered.
In the center of what looked like a storage room sat the man Tim had been hired to escort to Scotland. He’d been gagged and duct-taped to a chair.
Elliot James.
“Is anyone else here?” Tim murmured.
Mr. James shook his head wildly.
With a relieved sigh, he rushed over to the man and yanked the gag out. “You okay?”
“Yeah.” He gasped for air. “I’m fine.”
“Were there only two?” he clarified, eyes still peeled for danger.
“Yeah,” he managed, his face flushed and startling green eyes wide. Sandy-brown curls fell across the brow of a very frightened but very beautiful man. He took a few slow, ragged breaths, obviously trying to calm himself. “Just the two of them.”
Tim took a steadying breath of his own and slowly released the hammer on his Colt and flipped the safety up, never taking his gaze off Mr. James. “What happened?” He holstered the weapon then tore the duct tape from the man’s wrist.
“Aarrghh!” Mr. James jumped, the chair bouncing.
Tim winced when he noticed the arm hairs stuck to the tape in his hand. “Sorry ’bout that.” He paused over the other strip. “This one’s gonna hurt, too.”
Mr. James pursed his lips and nodded bravely. He let out a tiny hiss when Tim freed his second arm. That one didn’t take as much hair because a silver bracelet had protected most of the skin. Obviously, those punks had been amateurs in restraining.
“Sorry,” Tim said again.
Rubbing his wrists, he let out a breathy laugh. “It’s okay. Thank you for saving my life.”
“I believe that’s what I was paid for. I’m Tim Burkhart, your private security detail.”
Mr. James’s smile made his heart flutter. No, probably just the adrenaline. Tim didn’t get butterflies.
“Nice to finally meet you, Mr. Burkhart.”
“Call me Tim.” He stood and withdrew his phone. He gestured toward his bound legs. “You okay to get those? I gotta call the cops.”
“No!”
Tim almost dropped his phone when Mr. James shouted. He gaped at the man. “What do you mean no?”
Prying tape off of his khaki pants, the man paused. Those big green eyes grew even wider. “You can’t call the cops. My whole life depends on it!”

Some insights from author Deanna Wadsworth:

Hi, Deanna, thank you for agreeing to this interview. Tell us a little about yourself, your background, and your current book.

How do you develop your plots and characters?

I can’t really say where my muse gets her ideas from, but plots tend to just pop into my head as fully developed stories. The characters however are more one dimensional until I begin writing. Then the characters kinda teach me who they are and I learn as I write them

Who doesn’t love a good hero? Tell us about your protagonists. Was there a real life inspiration behind them?

No real life inspiration, LOL but Tim and Elliot are just normal guys in a bad place. Tim is a former FBI agent trying to get his life back on track after an ugly divorce. He sees this private security job protecting Elliot and an ancient Scottish dirk as a way to fix his financial worries. What he doesn’t know, is that it’s also going to fix his romantic worries as well.

Elliot is a high strung antiques dealer living by himself and swimming in business debt his grandfather left him after his death. Elliot could sell the shop but it’s all he’s ever known and he is afraid to venture out on his own. Fortunately he discovers the dirk and if he can get it to Scotland on time to please his demanding buyer, he just might live happily ever after.

What real-life inspirations do you use when world building?

Depends on what I’m working on. I am a hairdresser by trade and I talk to so many kinds of people and I hear the wildest stories. When I wrote TOO GOOD TO BE TRUE, I relied on the hubby’s knowledge of firearms to make Tim’s use of a gun believable and natural. I asked a few detective clients I have about some of the cop stuff, and the EMT in the book is really my friend JD who helped make that scene read true. I also picked the hubby’s brain for all the motorcycle bits in EASY RYDER. So I pretty much ask a lot of questions of the experts that I know until the scene is right and when that avenue is exhausted (aka annoyed) there is always Google, LOL

Did you learn anything from this book and what was it?

It’s your last meal on earth. What do you choose?

Hmmm, well if I’m going out it’s with a seven course spread! I looooove food….

The first course would be my girlfriend’s homemade grape leaves with hummus, feta and olives. Second course, big crab cakes loaded with crabmeat. Third course, crusty warm bread with a gorgeous pesto and plenty of olive oil for dipping. Fourth course, gazpacho with the fresh tomatoes from my garden. Fifth course would be a bubbly, crispy pizza with mushrooms, onions and ham. Sixth course would switch up to shrimp and lobster tail with a baked potato on the side, loaded with butter and sour cream. And I’d bring it all home with a slice of homemade strawberry pie.

LOL I think it would be my last meal because I would explode!

TOO GOOD TO BE TRUE sure sounds like a fun one night stand…and then some!

Interested? You can find TOO GOOD TO BE TRUE on Goodreads, Decadent Publishing, Amazon and AllRomance.

Click on this Rafflecopter giveaway link for your chance to win a copy of TOO GOOD TO BE TRUE (one winner) or a backlist title (three winners!).
Good luck and keep reading my friends!

About the Author:
Deanna Wadsworth might be a bestselling erotica author, but she leads a pretty vanilla life in Ohio with her wonderful husband and a couple adorable cocker spaniels. She has been spinning tales and penning stories since childhood, and her first erotic novella was published in 2010. She has served multiple board positions at her local RWA chapter and with Rainbow Romance Writers of America. When she isn’t writing books or brainstorming with friends, you can find her making people gorgeous in a beauty salon. She loves music and dancing, and can often be seen hanging out on the sandbar in the muddy Maumee River or chilling with her hubby and a cocktail in their basement bar. In between all that fun, Deanna cherishes the quiet times when she can let her wildly active imagination have the full run of her mind. Her fascination with people and the interworkings of their relationships have always inspired her to write romance with spice and love without boundaries.

Buy Deanna’s books at Dreamspinner Press, Decadent Publishing or at any reputable eBook seller like Amazon