Hi there. Today I’m sharing a review for a sexy cowboy M/M romance novella from LA Witt and Marie Sexton. ROPED IN is an enemies-to-lovers story that pits a skittish closeted cowboy against an eager animal rights activist. Expect skilled roping, of the submissive kind…. 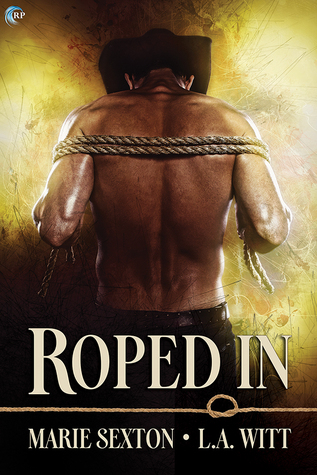 About the book:
Graham and his roping partner, Jackson, have been friends since they were boys. They’ve ruled the rodeo scene for ten years running, but lately, Graham’s heart isn’t in the game. He’s tired of the bruises, the cowboy mentality, and the animal rights activists who picket every event. He’s also tired of being in love with Jackson, and nothing’s been the same between them since their disastrous drunken encounter the year before.

Then Graham has a run-in with one of the rodeo protesters, and everything changes. Kaz is young, idealistic, and sexy as hell. But he’s also a know-it-all, animal-loving vegan, bent on saving the world one cow at a time. They have next to nothing in common, but Graham can’t stop thinking about what might happen if they can stop butting heads long enough to give it a try. Unfortunately, no matter how attracted Graham is to other men, he always panics and runs when the clothes start to come off. But Kaz has an idea for getting Graham past his nerves and into bed.

All they need is a bit of rope.
(Note: This is a re-edited second edition of a previously published title.)

My Review:
I really enjoyed this enemies-to-lovers M/M romance.

Graham is a cowboy, or horseman, through and through. He owns his own horse ranch and training stable and competes in team roping rodeo events with his childhood best friend, Jackson. He’s long harbored a crush for Jackson, but he’s been surrounded by super-macho cowboys his whole life, and Jackson–despite one botched, drunken experience nearly a year ago–is staunchly hetero. Plus, there’s tons of homophobia in their circle. Graham is unwilling to come out, but–at 30 years of age–he’s tired of being alone. One major obstacle for him to overcome is his fear of intimacy. Methinks it’s some inbred self-loathing homophobia that keeps Graham from sealing the deal, but he’s never been able to have sex. He’s stricken by a panic attack anytime he gets close to a man–which is why his tryst with Jackson was aborted.

While out at an event, Graham is so upset by the animal rights protesters that are (loudly) picketing the rodeo and spooking his horse, he lights into one of the protesters, Kaz. And, bam! He’s never been attracted to smallish, academic-type men, but something about Kaz strikes an unexpected spark. Kaz later takes Graham up on his offer to meet at a local bar to actually discuss the issues the protesters have with the rodeo. This meeting is enlightening.

Kaz is a grad student learning all about non-profit management. He’s sickened by the inhumane activity of sport rodeo–particularly calf-roping. He agrees to meet Graham and is surprised it’s not a set-up for his own bashing. He hadn’t expected Graham would find him attractive. Graham’s anxiety intrudes, however, and it’s Kaz who takes Graham in hand, er, in rope. Yep, it seems Kaz likes a bit of kink, and Graham thrives under bondage and submission.

This isn’t all sweaty sexytimes, but, there’s lots of those packed into this short novel/novella. No, Graham has some reckoning to make with Jackson–who, man, I can’t give it away, but DANG! It’s so bittersweet!!! I need there to be some resolution to that situation.

Naturally, while Graham and Kaz are of single purpose in the bedroom, they are still divided on the rodeo issue. And, when Graham recognizes Kaz’s unwillingness to budge, he doesn’t bother to tell him when his own feelings change. It looks like Graham might be a forever single, but Kaz reaches out in a moment of equine need–and a new partnership is forged. One in which both Graham and Kaz can equally participate. I really loved how Kaz had to trust Graham’s knowledge and experience regarding the ethical–if sometimes dubious-appearing–treatment of horses. It was a moment of acknowledgement that Graham had doubted ever arriving. (Disclaimer, I’m not necessarily sympathetic to the Animal Rights Movement, so I really identified with Graham in these scenes.)

I so liked how these guys filled a need in the other, and expect that they will make it, though I really would have liked a longer story so I could see how they did fare after their reunion.

Interested? You can find ROPED IN on Goodreads, Riptide Books, Amazon, Barnes & Noble and AllRomance. I received a review copy of this book via NetGalley.

About the Authors:
Lauren Gallagher is an abnormal romance writer who has recently been exiled from the glittering utopia of Omaha, Nebraska, to an undisclosed location in South America. Along with her husband, a harem of concubines, and a phosphorescent porcupine, she remains, as always, in hiding from the Polynesian Mafia. For the moment, she seems to have eluded her nemesis, M/M romance author L.A. Witt, but figures L.A. will eventually become bored with the wilds of Spain and come looking for her. And when that time comes, Lauren will be ready. Assuming L.A. doesn’t have her hands full keeping track of Lori A. Witt and Ann Gallagher, which she probably will.

Marie Sexton lives in Colorado. She’s a fan of just about anything that involves muscular young men piling on top of each other. In particular, she loves the Denver Broncos and enjoys going to the games with her husband. Her imaginary friends often tag along. Marie has one daughter, two cats, and one dog, all of whom seem bent on destroying what remains of her sanity. She loves them anyway.