Hi there! Today I’m sharing a review for a recently published M/M historical romance from Ava March. I really enjoyed HIS CLIENT, HIS REQUEST and VISCOUNT’S WAGER, so I was eager to read CONVINCING THE SECRETARY. 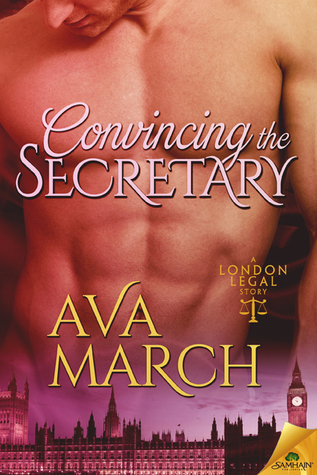 About the book:
Business and pleasure is a mix no gentleman should consider.
Lord Grayson Holloway goes after what he wants—be it in the law office on his clients’ behalf or in the bedchamber. His new position as partner puts him closer to achieving his goal of becoming the most successful solicitor in London. There’s just one problem—his new secretary. Broad of shoulder yet mild of manner, Edward tempts Gray like no other. Yet the young man barely notices him.

Edward Fenton tries to be a good secretary, but being in Lord Grayson’s hard, commanding presence rouses Edward’s most forbidden desires. Wicked, naughty desires no gentleman should consider giving in to, let alone with his new employer.

Gray is more than willing to mix business with pleasure. But convincing Edward to take a chance on a future with him? That might be the most challenging case Gray has ever taken on.

Warning: Includes buttoned-up gentlemen who become undone, improper use of a desk, spankings, and a big bad lord who has a soft spot for his virgin secretary.

My Review:
This is the third book in a series and a fully enjoyable read on its own. It’s an historical M/M romance set in 1820s London.

Edward is a Cambridge grad, serving as a secretary for a law firm in accordance with his father’s wishes. Edward truly has no love for law, or becoming a solicitor. He follows his father’s dictates because he is a dutiful younger son in a large family he has no desire to embarrass. Still, Edward is a 22 y/o virgin, who desires men, art and punishment–perhaps in that order.

Lord Grayson is a hard-nosed solicitor, new to his firm. He’s unhappy that his attractive secretary, Edward, always seems to be eyeing his partner, Mr. Barrington. Why does the man not look upon Gary? Is it because he knows Gray’s family “secret” that he was claimed, but not sired, by his “father” the earl? It seems he does desire men…just not Gray. (Well, that’s what Gray thinks!)

Thing is, Edward is terrifyingly attracted to Gray, and afraid his interest would be rewarded by a visit to Newgate prison as a sodomite. He has NO experience in sexual matters, or emotional ones, it seems. When Gray determines that he turns Edward on, he proceeds to give Edward exactly what he requests: punishment. Oh, and a couple of dates, and some seriously hawt first time action.

There’s a kerfuffle, but it’s contained to jealousy, meanness, and rejection between these two and is quickly resolved by second hard thinks and first frank discussions. I loved how these guys patched up their differences and made the best kind of HEA that they could manage given the time period of the book. Edward took charge of his life for the first time ever, and Gray learned that his parentage was not a matter of concern for a man who honestly loved him.

Very sweet, steamy and satisfying in a short read.

Interested? You can find CONVINCING THE SECRETARY on Goodreads, Samhain Publishing, Amazon, Barnes & Noble and AllRomance. I received a review copy via NetGalley.