Hi there! Today I want to share a review for a sweet supernatural M/M romance from Marie Sexton. You know I adored WINTER ORANGES, so I had to go back for another of her tales. DAMNED IF YOU DO is a story of a devil (or demon, whatevs) in danger of being demoted if he doesn’t harvest some souls. And, man it’s a problem when he falls for the guy whose soul he’s determined to collect. 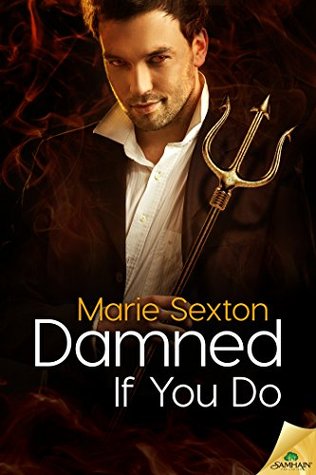 About the book:
The path to temptation is paved with a hellish amount of paperwork.
Soul acquisition is a drag, but if Abaddon doesn’t catch up on his quota, he could be demoted to scooping poop for the Hounds of Hell. With a deadline hanging over him, he heads for the Bible Belt, looking for the perfect combination of sweetness and challenge.

Seth is a blind musician, part of a traveling tent revival. He’s cute, mystically talented, and quotes the Bible at every turn. His soul is pure enough to fill Abaddon’s quota for months to come, and Abaddon is determined to claim it.

The problem? There’s the revival foreman who watches Abaddon’s every move. Then there’s the mystery of Seth’s many unusual talents. Lastly, there’s Abaddon himself. He’s beginning to like Seth a bit too much. Maybe Seth deserves something better than damnation.

But Hell’s agenda isn’t negotiable, and time is running out. If Abaddon doesn’t play his cards right, he could condemn both of them to the worst fate of all—an eternity apart.

Warning: Contains a Bible-quoting twink and an irreverent devil who’ll do anything to avoid going “back to the office”. Also, snakes. Lots and lots of snakes.

My Review:
Abaddon’s a mid-level devil who’s required to collect a certain quota of souls, but not all souls are equal. Like, corrupting one pure soul is worth more than a dozen athletes dying to Go Pro…for example. Abaddon really dislikes soul harvesting. He avoids it, at all cost, but he’s gotten a warning due to his lack of productivity and is due to be demoted if he doesn’t get one soul in the next month.

So, Abaddon searches high-and-low for a sterling soul, one that will push his quota far back. He locates one such soul, a shining beacon of a man, in Seth. Seth is the blind virtuoso who plays for a tent revival group which travels the southeastern US. He’s also more than just a man–as Abaddon soon learns.

Seth is 21, innocent, sweet and complete catnip for Abaddon. His soul-hunger is off the charts whenever he’s near Seth. Seth was an orphan, dropped at the doorstep of the revival, and adopted by the late revival master. He gets along with his surrogate family, and truly believes in the word of The Lord, but he wants a true love, and he’s both a virgin and gay. It’s interesting and cool that the revivalists are totally unaffected by that. The more time Abaddon spends in Seth’s presence, the more he begins to realize that Seth is mystical in a way that’s nearly unheard of. I don’t want to give too much away, but expect trials with snakes and faith healing that works.

In the meantime, Abaddon is plotting his harvest of Seth’s soul, and he’s also really wrecked over it. How can he condemn such a good man to an eternity in Hell? There are surely things Abaddon can trade Seth to make his human life more bearable, but will Seth accept them, knowing these gifts come from a Devil’s hand? As atonement, Abaddon plans to pull every string he can to ensure that he and Seth will be able to connect in Hell, and spend their eternity together. It’s still cold comfort for Abaddon…

It’s a quick read and an interesting story. I do love me a conflicted devil, and Abaddon is really a fun character to enjoy. The scenes in Hell are amusing and made me chuckle many a time. The unfolding romance was tender and touching, and I swooned for Seth just as hard as Abaddon did. I hadn’t quite predicted the full path of this book, which charmed me, as a reader. I loved the positive portrayal of the revivalists, and the stalwart and battle-ready chaperone that Seth and Abaddon had to avoid whenever they wanted some alone-time. There’s a heady build up of sexual tension, and a sweet love that’s on the page.

Interested? You can find DAMNED IF YOU DO on Goodreads, Samhain Books, Amazon, Barnes and Noble and AllRomance. I received a review copy of this book via NetGalley.

About the Author:
Marie Sexton lives in Colorado. She’s a fan of just about anything that involves muscular young men piling on top of each other. In particular, she loves the Denver Broncos and enjoys going to the games with her husband. Her imaginary friends often tag along. Marie has one daughter, two cats, and one dog, all of whom seem bent on destroying what remains of her sanity. She loves them anyway.

One thought on “Heart and Soul: DAMNED IF YOU DO-A Review”