Hi there! I’m so excited to partner with a fab author, Jacob Z. Flores, in support of a contemporary M/M romance! UNDERCOVER BOYFRIEND sounds like a great read and it’s coming out next week!

Be sure to check out the awesome note from Jacob, and be sure to enter to win one of 10 eBooks from his backlist or a $50 GC! 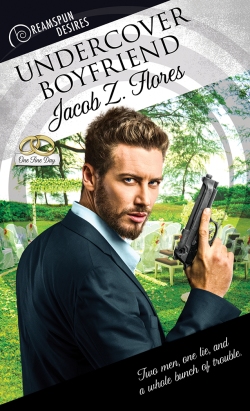 About the book:
Two men, one lie, and a whole bunch of trouble.

Marty Valdez is in serious trouble. His sister’s wedding is around the corner, and everyone expects to meet Marty’s super-successful underwear model boyfriend—whom Marty invented. Now Marty has to produce a half-naked hottie or suffer the worst humiliation of his life.

FBI agent Luke Myers is in serious trouble. He’s been working undercover to take down a dangerous drug cartel, but his cover’s blown and he needs to disappear. Luckily, a geeky yet intriguing comic book artist gives him the perfect opportunity. Luke just has to pretend to be his boyfriend, and pretending is what he does best. But between Marty’s mother and his ex, Luke might’ve bitten off more than he can chew, and Marty’s knack for finding trouble might ruin more than just his sister’s wedding.

“Who is this?” his mother asked. Her tone was as friendly as a snarling pit bull. She opened the door and placed her hands on her ample hips, awaiting her answer.

“This is Tim, Mom,” Marty answered. “You said you wanted to meet him.”

“No,” she said, waving her finger at him as she did whenever she corrected him. “I said I wanted to see a picture.”

He sighed. “Well, I thought this would be better.”

From the grimace on her face, he could tell she wasn’t quite sure. “Well, he is handsome,” she admitted. “But I doubt he’s better than a lawyer.”

“I know,” she said gesturing to Tim. “I have eyes. What I don’t understand is why you didn’t tell me he was coming when we spoke on the phone earlier?”

His mother’s only reply was a blank stare.

“Hola, Señora Valdez,” Tim said. He held out his palm in a show of respect, and she eyed it with a surprised smile. She was impressed yet remained guarded. “Muchísimo gusto.”

When he told her that he was thrilled to meet her, her stony façade faltered and a tiny smile crept across her red lips. She briefly placed her hand in Tim’s before she stepped back to let them in.

“You didn’t tell me he could speak Spanish,” his mother said after she closed the door.

Marty hadn’t expected that either. Based on Tim’s fair skin, blue eyes, and blond hair, he figured Tim was your average white boy who only spoke English. He’d clearly been wrong.

“I guess it just never came up,” he finally answered.

She eyed him before turning her gaze back to Tim. “¿Por qué tú hablas tan buen español?”

“Mom!” Marty exclaimed. Although he wasn’t entirely surprised, he was mortified that his mother was questioning why Tim spoke such good Spanish.

“For work?” she asked. “I wasn’t aware that bilingualism was a requirement to have pictures taken in your underwear.”

Marty buried his face in his hands. If he died right now, he’d be okay with that. His mother was doing her best to be difficult. He wouldn’t blame Tim if he bolted for the front door and ran away screaming. Hell, if he did, Marty might go with him.

Instead of stumbling or acting offended, Tim laughed. “It’s not. But we have photo shoots all over the world and clients in many other countries. I find it’s a good idea to be able to converse with customers in their native language. It helps them remember who you are.”

His mother clearly wasn’t expecting that answer. She’d been trying to make Tim stumble, but she was the one caught off guard. She’d always been a proponent of bilingual education, and she often spoke in Spanish to the fifth-graders she taught. It aggravated her that most Americans could only speak English, and it was best not to get her started on Latinos who couldn’t speak Spanish.

“Come,” she said as she started for the kitchen. “You must be hungry. I’ll make you something to eat.”

Marty stood in shock as his mother disappeared into the kitchen. She only cooked for family or people she liked. How the hell had Tim managed to slay the dragon after a two-minute conversation?

Tim leaned in and whispered in Marty’s ear. “I told you I had it covered.”

Marty glanced up and nodded into Tim’s smiling face. He’d already forgotten what Tim had said. All he’d been able to focus on was the intoxicating aroma of sweat and Old Spice that hovered around Tim and the feel of Tim’s warm breath fanning across his neck.

Tim grabbed his hand and pulled him forward. “Come on,” he said. “I smell homemade tortillas.”

Ah! Who doesn’t love an interfering mama, amiright? I SOOOOO look forward to reading this one!

I’m delighted to invite Jacob to chat with us about his fave Pretend Relationship movies…and I totally agree with these choices!! #Kinship

Hi, everyone! I’m Jacob Z. Flores, and I’m so glad to be here at V’s Reads. This is my first time here, and I’ve had a great time exploring this site. I want to thank my host for allowing me to come here today to promote my upcoming June 15 release Undercover Boyfriend, the first book in my One Fine Day series.

Some of you may already know this, but for those of you who don’t, this collection of books centers on the theme of marriage. For each book, readers will meet a new set of characters who will face a different set of complications, and in each book, I will be putting my own spin on some of the classic marriage/relationship tropes we have all grown to love.

In Undercover Boyfriend, I take on one of my favorite romance tropes—the pretend relationship. In honor of that, I decided to share with you today my top 3 favorite movies featuring the Pretend Relationship trope.

I can’t tell you how much I loved this movie. I’ve loved it ever since first seeing it as a kid in the 80s. Why did I love it so much? Well, besides having a crush on Patrick Dempsey (who is even yummier today!!!!), I enjoyed this movie because I could identify with Dempsey’s character, Ronald Miller. I remember being that goofy high school kid, wondering what life on the other side of the popular fence was like, and Ronnie actually got to live it. Of course, he had to blackmail popular head cheerleader Cindy Mancini to be his girlfriend. Naturally, the spoiled rich girl agreed, and of course, the popularity got to Ronnie’s head, but in the end, love prevails. The road they had to travel to get there, however, was filled with sweet and hilarious moments.

I still laugh out loud when Ronnie busts out in the African Anteater Ritual and his new popular friends think it’s a rad new dance move!

Okay, so this movie might be stretching the “pretend relationship” trope a bit, but the movie does revolve around a pretend sexual relationship that never happened. High school senior Olive Penderghast (played by the lovely Emma Stone) lies to her best friend about losing her virginity to a college guy to get out of spending the weekend with her best friend’s hippie/nudist parents. Unfortunately, one of Olive’s Bible-thumping classmates overhears the lie and quickly spreads it around the school. Olive doesn’t do herself any favors when she plays up the lie by pretending to have sex with a classmate, who is tormented by the guys at his school for being gay. As the lies escalate, Olive’s world spins out of control, and the only one who seems unaffected by the gossip is Olive’s longtime crush Woodchuck Todd, who looks much better in the Blue Devil uniform!

Okay, I’m sure no one was surprised by that revelation. To me, this movie is the epitome of this trope. Edward Lewis (Richard Gere’s character) needed a girlfriend to attend social events with him, so he hires prostitute Vivian (Julia Roberts) to stand in. What follows is a love story of two characters, who never would have met had it not been for fate and a lie, falling helplessly in love with each other.

Pretty sure I know what I’m going to be streaming this weekend!! Thanks, Jacob, for stopping in and I wish you the best of luck on your new book series.

Interested? You can find UNDERCOVER BOYFRIEND on Goodreads,
Dreamspinner Press (Ebook, or paperback), Amazon, Barnes & Noble, Kobo, and GooglePlay. It comes out June 15th, but pre-orders are up now.

Click on this Rafflecopter giveaway link for your chance to win a backlist book from Mr. Flores (ten winners!) or a $50 GC (1 winner!)
Good luck and keep reading my friends!

Jacob Z. Flores lives a double life. During the day, he is a respected college English professor and mid-level administrator. At night and during his summer vacation, he loosens the tie and tosses aside the trendy sports coat to write man on man fiction, where the hard ass assessor of freshmen level composition turns his attention to the firm posteriors and other rigid appendages of the characters in his fictional world.

Summers in Provincetown, Massachusetts, provide Jacob with inspiration for his fiction. The abundance of barely clothed man flesh and daily debauchery stimulates his personal muse.

When he isn’t stroking the keyboard, Jacob spends time with his daughter. They both represent a bright blue blip in an otherwise predominantly red swath in south Texas.

7 thoughts on “Getting the Scoop on UNDERCOVER BOYFRIEND–Guest Post and Giveaway!”