Hi there! I’m so excited to share a release day review for a fantastic contemporary romance from Tessa Bailey. TOO HOT TO HANDLE is the first book in her new Romancing The Clarksons series, and it’s definitely an adventure, so far. Expect sexy! 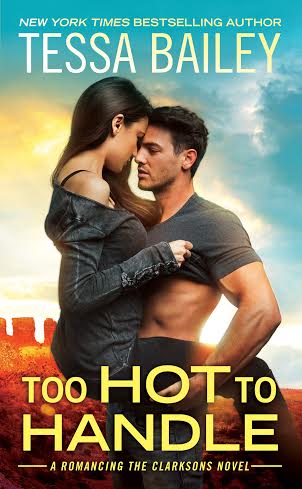 About the book:
When rescue looks like a whole lot of trouble . . .
The road trip was definitely a bad idea. Having already flambéed her culinary career beyond recognition, Rita Clarkson is now stranded in God-Knows-Where, New Mexico, with a busted-ass car and her three temperamental siblings, who she hasn’t seen in years. When rescue shows up—six-feet-plus of hot, charming sex on a motorcycle—Rita’s pretty certain she’s gone from the frying pan right into the fire . . .

Jasper Ellis has a bad boy reputation in this town, and he loathes it. The moment he sees Rita, though, Jasper knows he’s about to be sorely tempted. There’s something real between them. Something raw. And Jasper has only a few days to show Rita that he isn’t just for tonight—he’s forever.

Rita Clarkson stood across the street from Wayfare, the three-star Michelin restaurant her mother had made a culinary sensation, and watched it sizzle, pop, and whoosh into a smoking heap. Some well-meaning citizen had wrapped a blanket around her shoulders at some point, which struck her as odd. Who needed warming up this close to a structural fire? The egg-coated whisk still clutched in her right hand prevented her from pulling the blanket closer, but she couldn’t force herself to set aside the utensil. It was all that remained of Wayfare, four walls that had witnessed her professional triumphs.

Or failures, more like. There had been way more of those.

Tonight’s dinner-service plans had been ambitious. After a three-week absence from the restaurant, during which she’d participated in the reality television cooking show In the Heat of the Bite—and been booted off—Rita had been determined to swing for the fences her first night back. An attempt to overcompensate? Sure. When you’ve flamed out in spectacular fashion in front of a national TV audience over a fucking cheese soufflé, redemption is a must.

She could still see her own rapturous expression reflecting back from the stainless steel as she’d carefully lowered the oven door, hot television camera lights making her neck perspire, the boom mic dangling above. It was the kind of soufflé a chef dreamed about, or admired in the glossy pages of Bon Appétit magazine. Puffed up, tantalizing. Edible sex. With only three contestants left in the competition, she’d secured her place in the finals. Weeks of “fast-fire challenges” and bunking with neurotic chefs who slept with knives—all worth it, just to be the owner of this soufflé. A veritable feat of culinary strength.

And then her bastard fellow contestant had hip-bumped her oven, causing the center of her divine, worthy-of-Jesus’s-last-supper soufflé to sag into ruin.

This is the first book in a series that follows the four Clarkson siblings as they make a pilgrimage from San Diego to NYC for the New Years’ Day Polar Bear Plunge in honor of their late mother–the renown chef Miriam Clarkson.

Rita, Peggy, Aaron and Belmont are estranged adult siblings who’ve never really clicked. Their mom knew this and left a journal with the directive that they all gather in Coney Island on New Years to jump in the Atlantic–as an homage to the miracle that kick-started her own life. There is little of the journal revealed, but we know that Rita has read bits–enough to share their mother’s wish on the night her sibs gather around to watch their mother’s (now Rita’s) restaurant Wayfare burn to the ground. Rita followed her mother’s giant footprints and worked side-by-side with her in the restaurant for years. Rita had been on service that night, the first time since she returned from an epic TV cooking contest flame-out, and she’s wrecked over the loss, but only partially. The rest of her is grateful for a new start, in ANYTHING but cooking.

Goth-girl Rita’s almost knocked over when her brothers and sister agree to join her on the road trip to New York–the long drive necessary because Rita doesn’t fly. She also doesn’t get along with her siblings.  Silent Belmont, survivor of a well mishap, Aaron, smooth and smarmy politician, or Peggy, ultimate cheerleader-personal-shopper and four times engaged but never married, are all a mystery to her. Mostly, Rita’s a loner, and she likes it that way. A lot. Well, mostly.

Their vehicle breaks down in Godforsaken, New Mexico (just kidding, it’s actually called Hurley) and a cowboy-slash-motorcycle-god drives up to offer assistance. Jasper Ellis is going on 2 years of forced celibacy, to restore his self-respect after years of manwhoring around. He’s been the talk of his tiny town too long and strives to build a better legacy than his bar, the irreverently named “Liquor Hole”–yes, that’s not an unfortunate pun. (Say it fast, and you get the idea…) He’s about to open an eatery, and he’s immediately attracted to Rita.

What should be a simple overnight stay in Hurley turns into several days as Jasper manipulates time and space to keep Rita nearby. She’s attracted, no doubt, but he’s not really willing to let her get a free ride and toddle off–no matter what his body wants. The dialogue, both internal and external, is absolutely inflammatory, folks. It’s a dirty talk fest that won’t quit. And I liked it bunches. I liked how Jasper was desperate for a woman to find value in him, as a person, and not just as a pleasure giver. Rita’s never felt attractive, and Jasper’s arousal validates her in ways she never expected–and frustrates her, too. She’s on this mission with her siblings, she can’t possibly stay in Hurley with a guy she’s just met. Right?

I really liked the way the relationships between the siblings expanded and grew in this pressure-cooker time of togetherness. There are some very sweet and tender moments, and some that are just trainwreck-gazing. How Belmont handles/mishandles his attraction for Peggy’s bestie, Sage. How Aaron and Rita antagonize, and then sympathize, with each other. How Peggy manipulates everyone with her emotional outbursts…

What’s growing between Rita and Jasper is intense, and HAWT. It’s an ode to dirty-filthy-fantastic sexytimes, and all that with no actual penetration for a good long teasing time. The sexual tension is off the grid, knocked completely from the playing field somewhere into the stratosphere. When it’s finally realized, the payoff is killer. Some of the hottest scenes I’ve read in a LONG time. Woo boy! But Jasper is bound to stay in Hurley, and Rita has plans to continue connecting with her siblings and start a new life in NYC. Their life trajectories are not on parallel courses…but they could be.

I liked the end–which is a total HEA–and I liked where the series is going. I’m so eager to read the next book.

interested? You can find TOO HOT TO HANDLE on Goodreads, Amazon, Barnes & Noble, iBooks, Kobo, and GooglePlay. I received a review copy via NetGalley.

Tessa Bailey is originally from Carlsbad, California. The day after high school graduation, she packed her yearbook, ripped jeans and laptop, driving cross-country to New York City in under four days.

Her most valuable life experiences were learned thereafter while waitressing at K-Dees, a Manhattan pub owned by her uncle. Inside those four walls, she met her husband, best friend and discovered the magic of classic rock, managing to put herself through Kingsborough Community College and the English program at Pace University at the same time. Several stunted attempts to enter the work force as a journalist followed, but romance writing continued to demand her attention.

She now lives in Long Island, New York with her husband of eight years and four-year-old daughter. Although she is severely sleep-deprived, she is incredibly happy to be living her dream of writing about people falling in love.