Hi there! Today I’m sharing a review and giveaway for a contemporary M/M/M romantic suspense novel from Tara Lain. GOLDEN DANCER is the first in the Dangerous Dancers series, and an intriguing, and steamy, menage romance.

Catch the review, an excerpt and a $15 GC giveaway below! 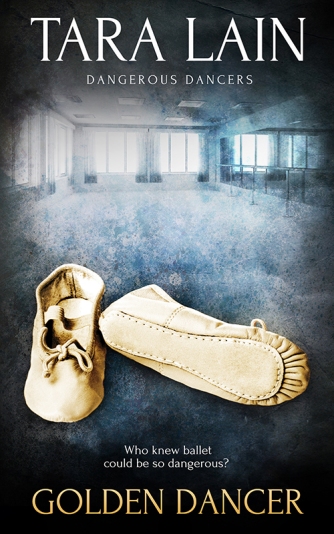 About the book:
A reporter and the thief he’s investigating both fall for a golden dancer forging a ménage of love and lies that could send one to prison and one to the morgue. Will he get his story or will he get his men?

When the mysterious Terrebone “collects” this beautiful dancer, too, Mac rushes to the rescue like a knight in shining cargo pants and plunges into a three-way passion that tears him between love and guilt. Can Mac keep investigating when his story could send one man to prison and another to the morgue? Will this reporter get his story or get his men?

The man turned and gave Trelain that wolfish grin again. Close up, he really was lovely with those deep, dark eyes, and dark curving brows contrasted with the shock of silver hair. “I thought I’d rescue you.”

Trelain smiled. “And I thought I was getting champagne.”

The man stared at him for a moment then looked up and waggled a finger seemingly into space. Moments later, a waiter appeared out of the crowd carrying a tray packed with bubbly. The man grinned. “Would you like it all?”

Trelain smiled back. Daniel seemed a man who got what he wanted. But then, so was Trelain. He selected a full glass from the tray. “One should be sufficient.”

The man took another one, though he didn’t seem to drink it. “But more is better.”

The waiter left, and Trelain took a sip. “Your philosophy of life, I presume?”

“So who are you, Daniel?” Trelain noticed that people milled all around them, but no one interfered.

“A child of the universe. A lover of art in its myriad forms. A surfer and diver. Oh, yes, and I dabble in computer software sometimes.”

Trelain glanced at him sideways. “Dabble? Like Bill Gates?”

The guy gave a huge smile. “Yes, precisely like that.”

No doubt richer than Croesus, based on the deference everyone seemed to show him. “So, what exactly does ‘rescuing’ me look like?”

“If you’ll let me, I’ll take you to my home in Laguna Beach. Sun, surf, relaxation.”

“Are you propositioning me?”

The man leaned down so his lips were close to Trelain’s ear. His breath smelled like peppermint. “I am propositioning you at every level, Cavalier. You are the most beautiful thing I’ve ever seen on two feet, and I want you near me. Preferably under me for hours at a time.”

Bloody hell. Trelain smoothed a hand down his arm to try to control the goosebumps.

The man chuckled. “I think that sounds good to you.”

A little distance was required. Trelain stepped back. “You are more than persuasive, uh, Daniel, but you also impress me as a man who is used to getting what he wants. Perhaps I don’t enjoy being one of a multitude.” Yes, he was being flirtatious, but it was also true. Maybe part of the appeal of the reporter had been that he wasn’t usually attracted to men. Trelain liked being special. Hell, who didn’t?

Daniel very discreetly ran his fingers up Trelain’s arm. Good. He wasn’t trying to make a show of possession. “It’s true, my friend, that I have had many brief encounters in my past. I don’t think you know anything about me—why would you? But others will delight in telling you of my peccadilloes, so I might as well come clean. That was the past, however. I have not been in a relationship of any kind for many months. I am weary of the game. I want someone special in my life, and you, my friend, are very special.”

Trelain smiled. His thoughts had been answered. He opened his mouth to speak, but Terrebone put up a hand. “One more thing. I won’t rush you or crowd you. I would love to have you come to my home as a guest with no strings attached.”

Trelain cleared his throat. “I am dancing three nights this week, and I believe Laguna Beach is some distance from here.”

“About an hour. But you’re free on Thursday, I believe?”

“Why don’t you pack your bathing suit”—he gave that charming, lecherous grin— “or not, and I’ll send a car for you after your performance. I’ll have a massage therapist standing by, my chef will prepare all your favorite foods, and you can have a quiet vacation for a few days.”

Suddenly, Trelain was too tired for banter. A vacation sounded like heaven, and if it was with this beautiful man, all the better. He might have a thing for that silly reporter, but it was a stupid, fruitless crush. This man was handsome, rich, and seemed sincere. And he knew he was gay. A huge improvement. “I would love to come.”

Daniel looked surprised, then delighted. “You are a world of surprises, Cavalier. I like that in a man.”

Trelain sipped the last of his champagne and glanced at the still-milling crowd of patrons. He sighed. “And now I must continue my role as money-grubber-in-chief.” He bowed slightly. “If you’ll excuse me.”

“Not enough? I just wanted Allison to know I hadn’t been wasting your precious time.”

Trelain carefully folded the paper. He laughed all the way back to the group of donors surrounding the anxious program director.

This is a re-publication of a previous book–the notes say there have been edits to which I cannot attest.

It’s a M/M/M menage between a billionaire, a ballet dancer and a beat reporter. It’s hot.

Mac is a reporter for a popular online news outlet. He’s offered an exclusive interview with Cavalier dancer Trelain Medveyev, a half-Brit, half-Russian star when the entertainment reporter is too sick to make the appointment. Mac gets this job because he knows a lot about ballet–his parents run the Dallas ballet company. Throughout his life, Mac has been told–by his “heterosexual” father–that he shouldn’t look at other men, and should have a masculine aspect, and this translated into “don’t be gay” in Mac’s adolescent mind. As a war veteran and journalist, Mac is a man’s man, but he’s not a ladies man…he’s never had a serious relationship with a woman.

Meeting with Trelain is…edifying. Trelain makes no effort to disguise his attraction to his burly reporter, and Mac accepts his invitation to dinner. Which results in sexytimes. For Trelain, the biggest, sexiest, challenge is a straight man. Though their night goes well, Mac is horrified by his actions, and Trelain moves on, meeting Daniel, billionaire software designer and possible art thief. Mac has been investigating Daniel as a likely candidate for stealing the famed and priceless Golden Dancer sculpture. And hearing that Trelain is spending several days with Daniel sets Mac on complete berserk overdrive.

Expect more sexytimes. See, Trelain is gone over Mac. Meanwhile, Mac is reluctantly attracted to Trelain…and silver fox Daniel, truth be told. Daniel finds Trelain unparalleled in beauty, and is willing to give him anything to keep him near–even Mac, if that can be arranged. (Spoiler: it can!)

This is a menage. It is hot and filthy and fun and wow! There’s still the whole art theft and evil Germans and blah blah blah. I liked that part, really, and despite some earlier reviews having knocked it, I was totally cool with it. It may be that the revised version is a bit more tempered, and that’s why I didn’t find it over the top. That said, the masterpiece of the book is really the hawt sexy lovin’s between Mac, Trelain and Daniel. I liked how they supported each other. It was fun to witness the interactions between Trelain and his mother–who desperately wants him to marry well, and the steps Mac and Daniel take to ensure he’s emotionally sound after her badgering.

Also, the sexytimes get really, really dirty in this book. Like, absolutely filthy in the most delicious way. If books had lewdness ratings this one might be labeled: OMFG. So, there’s that.

Click on this Rafflecopter giveaway link for your chance to win a $15 GC.
Good luck and keep reading my friends!

5 thoughts on “Both Falling For the GOLDEN DANCER–Review & Giveaway”