Hi there! Today I’m sharing a review for a newly-published contemporary YA romance from Annie Carr. HOW TO BE COOL features a teen boy who suffers cerebral palsy looking for love. And finds it! (And loses it…for a while.) It’s really a fascinating read, and the original plot turns kept me awake long past my bedtime. 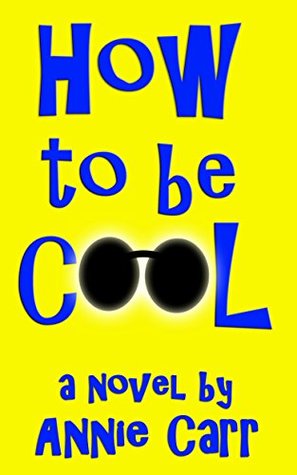 Ethan will never be as cool as his twin brother Alex. Alex is a star football player and president of the senior class, while Ethan was born with cerebral palsy and needs crutches to walk.

Laura will never be as cool as her perfect older sister Nikki. Nikki is everything Laura isn’t—confident and gorgeous… until one night when Nikki is brutally raped and hospitalized, and Laura finds comfort in her new friend Ethan.

Together, Ethan and Laura realize maybe you don’t need to be cool to be happy. Or to fall in love.

And then a revelation about the attack shatters everything…

I see her out of the corner of my eye. Elsie Kahn. Elsie of Mr. Watson’s chemistry class fame, the girl who (accidentally?) set her homework on fire with the flame from her Bunsen burner. She got about as red as I’d ever seen a person get as Mr. Watson chewed her out in front of the whole class.

It seems like Elsie isn’t having a better day today. She’s running for the last of the school buses, but the driver doesn’t see her, and it’s obvious this is going to be a major fail. Her hair is whipping behind her head and her cheeks are all pink with exertion. She’s screaming, “Wait! Wait!”

It probably needs to be said about Elsie: she isn’t pretty. I’m not saying that in a mean way like my brother would, just in a factual way. She’s not. Her body is pretty nice, or at least it was the day of the chemistry fire, when she was wearing a maroon skirt that fell just above her knees and a clingy black shirt. And she’s got nice hair too—strawberry blond and silky. But it’s obvious even from where I’m standing that Elsie had been born with a cleft lip, and it didn’t get repaired right. You can see where the pieces of her upper lip don’t quite come together evenly.

So Elsie isn’t pretty. Big deal. The fact is, she’s something even better than pretty.

Owen comes out of the school at that moment, and I can see the pit stains on his shirt under his open jacket. He apparently worked up quite the sweat running to five different classrooms. But the good news is, he’s holding his Spanish book triumphantly above his head. “It was in the bathroom!” he declares.

The bathroom? Are you kidding me? And now this book is going to be in my car? Lucky for him, I’ve got other things on my mind.

“Hey…” I nudge Owen. “Elsie missed her bus. Maybe we should offer her a ride home.”

Owen looks up in Elsie’s direction. He makes a face like he’s not thrilled about the idea, but then shrugs and sprints for the car. “I guess so. But she has to sit in the back.” Did I mention Owen has already claimed eternal shotgun?

I look over at Elsie, and all of a sudden, I’m really nervous. If Elsie says yes, she will be the first girl to ride in my car, with the exception of my mom. I try not to drive myself crazy with the possibilities. I run my tongue over my teeth, because I don’t want there to be any spinach stuck in them (or whatever that green stuff was at lunch). Then I tighten my grip on the handles of my forearm crutches, and start limping awkwardly in Elsie’s direction.

Elsie’s got her phone in her hand and she looks like she’s seconds away from bursting into tears. “Elsie?” I say. And of course, my voice cracks, like I’m freaking thirteen years old. I clear my throat, hoping she didn’t notice.

Elsie looks up in surprise. “Yes?”

“Uh…” I can feel the heat in my face—I’m sure Elsie can see it too. I focus on getting the words out and not on how silky Elsie’s hair looks. “I’ve got a car, so, um, if you need a ride or something…”

Elsie is staring at me, which if you ask me, is kind of bad manners. First she stares at my face, but I’m okay with that. There’s nothing wrong with my face. All right, I’m not, like, Mr. Handsome or anything like my brother, but I’m not a guy who walked into a wall either.

Then her eyes drop and she’s looking down at my crutches and my legs. That part I’m not thrilled about. I’ve got braces going up to the knee on the right and up to the hip on the left. Even with the braces, my left leg always seems to rotate inward so that my left foot points about forty-five degrees toward the right one. Elsie keeps on staring for what feels like five hours, but if I’m being honest, it’s probably more like fifteen seconds. Not that it makes much difference. It’s long enough, anyway.

Elsie glances over at a group of girls standing nearby, watching us curiously. “No, thanks,” Elsie says, then she turns back to her phone.

Elsie turns away from me, letting me know that there’s zero point in trying to persuade her. Yeah, as if I would. If Elsie doesn’t want to be in a car with me, then I’m not going to beg. Let her find her own goddamn ride home at this hour. Good luck with that, Elsie.

I make my way over to my car, where Owen is waiting. He’s leaning against the hood, probably making a huge dent in it. “So is she coming?”

I dig my keys out of my pocket and shrug like I couldn’t care less. “She found another ride,” I say.

This is a book about the insecurities of youth, falling in love, and family loyalty.

Ethan and Alex are twin boys, seniors in their small Wisconsin-town high school. Alex is bigger, more attractive and smarter than Ethan. By virtue of prenatal complications Ethan almost died at birth, he is developmentally delayed and has cerebral palsy. From his own hard work and constant attention, Ethan is a good student, but he can’t walk without his leg braces and arm crutches, while Alex is a star football player, class president and love-em-and-leave-em hook-up artist. Ethan is jealous of his brother’s “easy” life, and wishes desperately for a girlfriend. He knows that he’ll probably never find a girl to love him, and that’s frustrating. He finds one girl in school particularly interesting: Laura, and he spends a lot of time trying to get her attention.

Laura is a high school senior, a bit dumpier than her gorgeous college-aged sister, Nikki. Nikki has never let Laura forget this, either. Their relationship is very strained. One weekend, when Nikki is home visiting from college, she goes out on a date with a hometown boy. She’s later found raped in a park, beaten into unconsciousness. Laura is as appalled as her family, and spends hours and days at the hospital, sitting with comatose Nikki.  The only distraction comes when Laura meets Ethan.

While Laura might be a bit skittish of Ethan, she’s more trapped in a self-hate spiral. She considers herself fat, and isn’t–and never will be–as gorgeous as Nikki, but the attention she receives from Ethan is heady. She wants to be seen as attractive, and finds Ethan to be really charming and cute, and soon forgets all about his leg braces. Ethan’s so floored that Laura isn’t running as fast as she can in the next direction that he’s ecstatic. He and Laura begin to date, on the sly, because Laura doesn’t want and scrutiny and Ethan doesn’t want to be a spectacle. They are seriously mired (realistically) in their insecurities. I liked that they didn’t hold back, and I liked how they worked through their body issues. They have a sweet romance that is fulfilling for both of them–expect sexytimes off the page–and it seems like everything is going great. Well, except that one secret that Ethan learns about a month after dating Laura. And it has everything to do with Nikki and Alex.

I don’t want to reveal too much of the plot, so I’m just going to say that this was a really unique story. I loved the honesty of the characters and I loved the inclusion of a CP character, and I really felt a kinship with Ethan, for all his travails. He’s had it hard, and I could understand why he kept Alex’s secret–because exposure would surely cost him his first love and his brother in one fell swoop.

The family dynamics were so realistically portrayed, with bitter antagonism and sibling rivalry, and overwrought parents and bad decisions. The ending was so good, even if it wasn’t all hearts and flowers. Ethan and Laura come to honest terms with each other, and there is hope for each of them to have happiness. Alex and Nikki both have their situation fully resolved, in a way that’s not storybook and not fairy tale. All bad situations leave a stain, and Alex and Nikki must bear those marks–some for longer than others. It was interesting how these two–who all would say had it made–really held their own problems so close to the vest, and how the whole scenario changed Alex–for the better it seemed.

I hadn’t anticipated the many twists of this book, and that was so refreshing. One niggle for me was the author not knowing that football happens in the fall–only. There were so many references to Alex’s football practice and the team competing, and the book was set January-May. So, that irked me, from a reader standpoint. Otherwise, I really enjoyed.

Interested? You can find HOW TO BE COOL on Goodreads and Amazon.

3 thoughts on “Not Easy: HOW TO BE COOL–A Review”