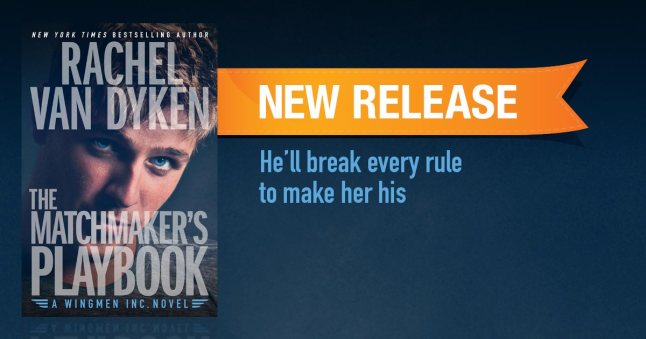 Hi there! I’m so excited to share a release day review for a sassy New Adult romance from best-selling author Rachel Van Dyken. The first book in her new Wingman Inc. series, THE MATCHMAKER’S PLAYBOOK features a former NFL recruit and the hidden gem he discovers while trying to get her oblivious crush to open his eyes…

Catch the review, and excerpt, trailer and the giveaway below. 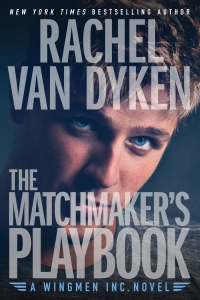 About the book:
Wingman rule number one: don’t fall for a client.

After a career-ending accident, former NFL recruit Ian Hunter is back on campus—and he’s ready to get his new game on. As one of the masterminds behind Wingmen, Inc., a successful and secretive word-of-mouth dating service, he’s putting his extensive skills with women to work for the lovelorn. But when Blake Olson requests the services of Wingmen, Inc., Ian may have landed his most hopeless client yet.

From her frumpy athletic gear to her unfortunate choice of footwear, Blake is going to need a miracle if she wants to land her crush. At least with a professional matchmaker by her side she has a fighting chance. Ian knows that his advice and a makeover can turn Blake into another successful match. But as Blake begins the transformation from hot mess to smokin’ hot, Ian realizes he’s in danger of breaking his cardinal rule…

“If you  hurt her, I’m going to break off your favorite appendage.”

“Silly Gabi.” I grinned. “Is that an invitation to touch?”

“Guarantee  if I ever do touch you, it will only end badly.”

“Stop that.” She flicked me on the nose. “Your sexual prowess is dead to me. Dead!”

Rolling my eyes, I wrapped an arm around her and steered us both into the kitchen, where the smell of French bread and spaghetti filled the air. “Have I told you how much I miss our weekly dinners? Think we should do it daily? You know, so I don’t starve?”

Gabi shrugged out of my embrace. “Learn how to cook.”

I jutted out my lower lip. “It’s not for lack of knowledge.” I broke off a piece of warm bread, then poured myself a large glass of wine. “It’s because yours always tastes better.”

Gabi groaned loudly. “Damn, do the girls really fall for that? Still?”

“You say that every day.”

“Because it’s true every day.”

“When’s dinner ready?” Serena bounced into the room, literally, her head bobbing from left to right. Maybe that’s how girls like her built up more brain cells. They shook the air, and the pressure between their ears exploded, making tiny little brain-cell babies.

Gabi poked her head into the fridge. “When Lex gets here.”

Never mind. No brain-cell babies. I fought the urge to point to the steaming spaghetti and bread sitting on the breakfast bar. Didn’t it look ready, kiddo?

“Technically,” I answered for Gabi. “But we aren’t eating”—I stressed the word “eating” even though I’d just taken some bread—“until my sidekick gets here.”

“Sidekick, huh?” Serena crossed her arms, forcing her boobs to kiss one another and nearly hit her in the chin.

“So is Robin,” Gabi said defensively.

Whoa. Did she just defend Lex? I felt her forehead. She pushed my hand away and handed me some parmesan cheese.

The door flew open, and Lex stepped through, holding up two bottles of Cab. “Sorry, traffic was shit.”

Lex and I shared a look before Lex stomped over to the swear jar and tossed in a dollar bill.

My Review:
Ian Hunter is a class A womianizing jackass who’s decided his prowess with the ladies is best cultivated into a Love Coach business. Together with his best friend Lex, Ian is the “superman” of getting shlumpy co-eds the man-boys of their dreams. And, then he goes off to find some tail on his own. Lex is no better, they both screw first, take names later–but only with the “dumb girls” who are only in it for a one-nighter.

The girls who seek out Wingmen Inc’s pricey services are highly vetted, as are their conquests. Ian, All-American bad boy, gives them style tips and dating rules. He uses his own reputation and persona to goad the unsuspecting males into jealousy-induced courting, and the girls are mostly (99%) satisfied.

It’s all going great until Ian’s newest client is one he doesn’t want to let go to her Prince Charming. Blake is the roommate of his best gal-pal, Gabi. She’s fit and fun, but is a tomboy in love with her childhood bestie, David. David sees Blake as a boy, mostly, and Ian’s charmed by her sassiness and girl-next-door looks. Ian never pursues his clients, but he’s never met a girl like Blake, and he senses the same isolation and loneliness in her that he, as an orphan, struggles with daily. the more time he spends coaching Blake through the steps, the more he wants Blake to decide David isn’t the man for her.

This is a romance, and Ian is an antihero. He’s meant to come off as brash and ridiculous, to a degree, and boy does he nail that. His commentary, both internal and in dialogue, is so wholly sexist it’s almost intolerable. For the first half of the book I wished Gabi would bite the bullet and actually smother Ian with a pillow while he slept, as she repeatedly threatened. I can’t say that I warmed to him in the second half, but I could see that he made changes in his own behavior that signaled both maturity and self-sacrifice–absolutely new concepts for him where women were concerned. He’s slightly sympathetic, on account of having been an orphan a long time, and also his NFL career-ending injury–before his career even began. I did like how he loved Blake, and how he made her well-being his focus, even against his desires and interests. It’s Ian who tells the story, and the one readers need to bond with, and I was able to enjoy the book almost despite him.

It’s clear that the next book will be a battle of wills for Lex and Gabi, both have a hate-hate experience going on. It sounds intriguing.

Interested? You can find THE MATCHMAKER’S PLAYBOOK on Goodreads and Amazon (US, UK, CA and AU).

Click on this Rafflecopter giveaway link for your chance to win your very own Boyfriend-in-a-Box, courtesy of Wingmen Inc. You’re welcome.
Good luck and keep reading my friends!

About the Author:
Rachel Van Dyken is the New York Times, Wall Street Journal, and USA Today Bestselling author of regency and contemporary romances. When she’s not writing you can find her drinking coffee at Starbucks and plotting her next book while watching The Bachelor.
She keeps her home in Idaho with her Husband, adorable son, and two snoring boxers! She loves to hear from readers!
Want to be kept up to date on new releases? Text MAFIA to 66866!