This month I’m so excited to share the final book in the Captive Prince trilogy from C. S. Pacat. As you know I fell into the rabbit hole on this series, binge reading the books in hours apiece. KINGS RISING was no less stunning than the first two books. Catch my reviews for CAPTIVE PRINCE and PRINCE’S GAMBIT so you can get better oriented to this captivating fantasy/political thriller that has a dash of M/M romance. 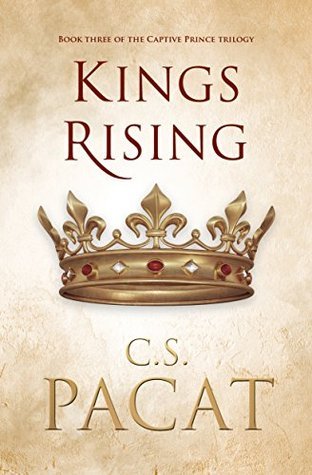 On the brink of a momentous battle, the future of both their countries hangs in the balance. In the south, Kastor’s forces are massing. In the north, the Regent’s armies are mobilising for war. Damen’s only hope of reclaiming his throne is to fight together with Laurent against their usurpers.

Forced into an uneasy alliance the two princes journey deep into Akielos, where they face their most dangerous opposition yet. But even if the fragile trust they have built survives the revelation of Damen’s identity – can it stand against the Regent’s final, deadly play for the throne?

My Review:
You absolutely must read this series. Oh, wait. You must read it in order. When you read it, that is. Because you must read it. I had never heard of the author, but what began as whispers in the M/M community soon became a resounding gong of praise for the books that were once an internet phenomenon but are now traditionally published.

For those who haven’t read any of the books, crown Prince of Akielos, Damianos, was captured by his elder half-brother’s guard, chained and sent as a sexual slave to Crown Prince of Vere, Laurent, under the pseudonym “Damen”. Vere and Akielos have had a truce since Damianos struck down Laurent’s elder brother in battle, and Laurent swears he will kill Damianos. Damen must keep his identity hidden to preserve his life, escape, and claim his throne, now that his father has died. That’s rather difficult because Laurent–while he wants little to do with Damen–is unwilling to release him. Further, Laurent is in imminent peril. His uncle, the Regent king, seems to want to remain on the throne and is willing to sacrifice Laurent in border patrol in order to cement his own reign.

As the book opens, Damen’s true name has been revealed in the company of Akielian troops and he takes control of a fort, prepares to battle the Regent’s army and command his smaller garrison win against awful odds. His commanders believe that Laurent is using him, and their worry is great considering the unconscionable issue of Damen, their king, being a slave to a prince–no matter how frigid all believe Laurent to be. Will Laurent try to kill Damen now that he knows his identity? It’s a real fear that Damen suffers–especially as the months of living together and campaigning have brought a particular closeness to Damen and Laurent–one that Damen is loathe to sever. One that endangers Damen’s alliances with his own generals, and causes the Veretians to balk, as well.

It was an amazing set of political gymnastics keeping the combined forces of Veretians and Akielians together, and just when it seems they will win back their thrones the full treachery of both Damen’s brother and the Regent of Vere becomes known. I wasn’t shocked, as I fully expected those revelations–due to excellent foreshadowing–but the manner of revelation springs yet another trap that threaten both Damen and Laurent with execution. The machinations were amazing, and kept the pace incredibly taut. Further, the love story between Damen and Laurent is not easy. They must work at it, and build it, just as with their alliances. It is a quiet affair, because there is so much scrutiny, and yet it is packed with sexual tension, longing, loss and satisfaction. That said, it’s not terrifyingly graphic, so those who are not fans of same-sex pairing do not need to shun the books. In the whole three-book series, I bet there are less than 10 pages of actual sex (that’s 1% of the page volume…)

As a series, this is one I’d enjoy again and again. The storytelling is superb, and the resolution is hopeful and mostly happy.

Interested? You can find KINGS RISING on Goodreads, Amazon, Barnes & Noble and in retail booksellers/libraries all over.

Thanks for popping in my friends! Be sure to hop over to my fellow book reviewers and see which are the best books they’ve read this month.