Hi there! Today I’m sharing a review for a new book from the writing team of Havan Fellows and Lee Brazil. FIRE OF THE HEART is the third book in the Hearts of Parkerburg series, and it’s a sweet read. 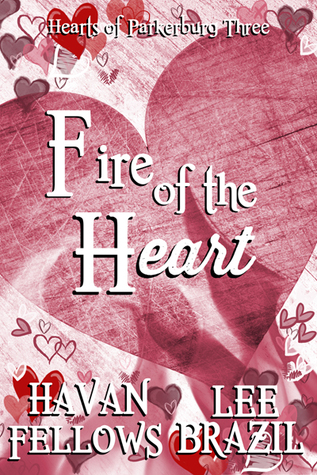 About the book:
Craig Gilchrist is the oldest of five siblings, the captain of the Parkerburg Fire Department, and all around buddy his friends run to when they have a problem. Unfortunately, he’s keeping a secret not only from the whole town, but his family as well. Living in the shadows works for him until one fateful night when a hot stranger walks across a smoky barroom, forcing Craig to make a move that could rock the foundation of his existence…and fill the void in his heart he doesn’t realize he has.

Melrose escaped the end of a bad relationship to start over in Parkerburg. With the support of his cousin and a job waiting tables at a great restaurant, he thinks his life is finally going pretty smoothly. That’s when his path crosses that of Craig Gilchrist, local fire captain. The big, beefy firefighter is definitely not his type. So why does he suddenly star in all of Melrose’s fantasies?

With Melrose at his side, Craig finally has the motivation to step out of the shadows and let Parkerburg see the real him…until trouble arises and the truth comes to light that perhaps he doesn’t know the real Melrose.

Lies and fears play havoc with their newly acquired relationship. Luckily, once ignited, the hearts of Parkerburg don’t burn out so easily.

The Hearts of Parkerburg stories can be read as standalones, each with a HEA…but trust me, you’ll want to read about all the sweet happenings in this quaint little town.

My Review:
This is the third book in the Hearts of Parkerburg series and can be enjoyed as a standalone. Melrose is living with his cousin and has taken a job as a waiter at the upscale restaurant Alimentaire, rebuilding his life after leaving his abusive ex behind. He’d spent seven years with Bas and never wanted to admit to the abuse–because he’s a man, and Bas’s smaller than he is. People would think less of Melrose for admitting that weakness, right?

It’s been a year since he walked away and Melrose hasn’t been with anyone. He’s oddly attracted to a burly, likely straight, fire chief, Craig. They subtly cruise each other, until Craig confesses his interest. He’s been with women his whole life, but is a closeted gay man. At thirty-five he’s feeling a little peculiar about lusting after Melrose, who he initially assumes is barely legal…he’s stupefied to learn Melrose is 30.

Things would have gone great if Bas hadn’t turned up out of the blue and attacked Melrose in a drunken fit. Melrose is too ashamed to confess what truly happened and the police force of Parkerburg is looking for the suspect–assuming it’s a hate crime. This is unsettling for Melrose, as he assumed a “mugging” would get brushed aside quickly. Craig’s put the heat on, however, afraid that Melrose will head back to the big city if he feels unsafe in Parkerburg. Melrose is terrified of losing Craig if he admits to his lie about the mugging, but he can’t take the pressure any longer. Meanwhile, Craig has to decide if he’s ready to take the step he’s dreaded for years: coming out. To bee with a guy like Melrose it seems that he is.

Expect a bit of fireside loving, a nasty ex, a surprised but supportive family and two of the best buddies a fire chief could ever have. This one’s a sweet breezy read that’ll warm you up inside.

Interested? You can find FIRE OF THE HEART on Goodreads, Amazon, and Barnes & Noble.

About the Authors:
LEE BRAZIL
Somewhere in a small town in up-state New York are a librarian and a second grade teacher to whom I owe my life. That might be a touch dramatic, but it’s nevertheless one hundred percent true. Because they taught me the joy of reading, of escaping into worlds crafted of words. Have you ever been nine years old and sure of nothing so much as that you don’t belong? Looked at the world from behind glasses, and wondered why you don’t fit? Someone hands you a book, and then you turn the page and see… There you are, running from Injun Joe in a dark graveyard; there you are fencing with Athos; there you are…beneath the deep blue sea- marveling at exotic creatures with Captain Nemo.

I found myself between the pages of books, and that is why I write now. It’s why I taught English and literature for so many years, and it’s why my house contains more pounds of books than furniture.

If I’d had my way, I’d have been a fencer…or a starship captain, or a lawyer, or a detective solving crimes. But instead, I am a writer, and I’ve come to realize that’s the best thing in the world to be, because as a writer, I can be all those things and more. If I hadn’t learned to value the stories between the pages, who knows what would have happened? Certainly not college…teaching…or writing.

HAVAN FELLOWS:
I annoy, love, respect, scare, seduce, hurt, anger, infatuate, frustrate, flatter, envy, amuse and tolerate everyone. I just do it better in writing thanks to a little thing called…edits.

I recently took the drastic step of quitting my EDJ (evil day job) and am now living in the gorgeous desert in Arizona making a go at this writing stuff full time…and I can’t see me regretting this decision ever.

Just like every other red-blooded human—I get a little bouncy when I get mail (any kind too…email, comments, private messages…you wanna do it, do it with me *winks*). So feel free to drop me a line—whether it’s on my blog, twitter, Pinterest, or you track me down on FaceBook or Google +…it’s easy to catch someone who wants to be caught.

I specialize in writing boyxboy though I read almost everything…and I fancy myself as slightly funny every once in a while. 🙂

One thought on “Finding a FIRE OF THE HEART–A Review”