Hi there! Today I’m sharing a review and giveaway for a new contemporary M/M romance from LE Franks. 6 DAYS TO GET LUCKY is the sequel to 6 DAYS TO VALENTINE and should be read in order. That said, I enjoyed it fine on its own. 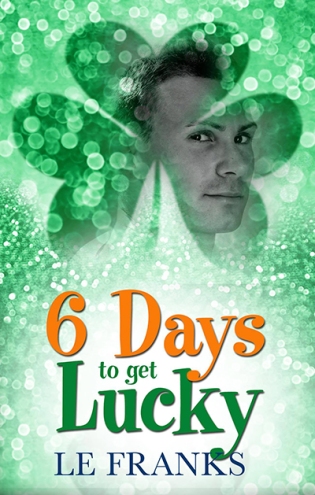 About the book:
Mixologist Nick Valentine never thought love was in the cards, but after a scorching Valentine’s Day kiss from bouncer Davis “FatBoy” Newman, he’s beginning to think it’s possible. After four weeks of dry spell, Nick’s losing patience—it’s time FatBoy stop acting the gentleman and just throw him over the bar or Nick may just change his mind.

All FatBoy wants is a shot at winning Nick’s heart. As long as meddling bosses, an Irish hurling team and a bar riot don’t ruin his chances forever, he might just get lucky and take the man of his dreams, home.

Reaching across the empty bed next to me, I rode out the last waves of my dream alone. I could still feel his phantom kiss on my lips and the sensation of a hand stroking along my thigh.

The rest of it was just a blur of emotions and sticky residue on my sheets—though I could guess at it without much effort. FatBoy Newman had been a specter haunting me at work so it was no great leap to assume he’d shouldered his way into my dreams as well.

In fact, he was at the root of my problem: I’d been having a hell of a dry spell.

Four weeks since the most romantic kiss of my life…

Four weeks of nothing.

Fuck the South and its mythology of the Southern Gentleman—if FatBoy Newman didn’t stop treating me like a delicate flower and throw me up against a wall soon, I was going to explode.

It was six days until St. Patrick’s Day, and FatBoy had until then to make his move, or I was moving on.

My Review:
This is the second book in a series, but can be enjoyed as a standalone.

The previous book, 6 Days to Valentine, was apparently about one romantic kiss that happened between mixologist Nick Valentine and Davis “Fatboy” Newman, the strong silent and “straight” security manager at the restaurant/bar Frisson where they both work–on Valentine’s Day. That was three weeks ago and there’s been nothing between them but a lot of heated looks, and passing gropes, since.

Both men work a lot of evenings, and their nights off hadn’t lined up, and inexplicably they cannot meet during the day. Also, Davis is closeted and doesn’t acknowledge his interest in Nick unless they are behind closed doors. Nick’s been a party boy in the past, and was never one to miss out on a cooler quickie until this “thing” with Davis developed. His three week drought is more than he can stomach, quite frankly, and he’s equally intrigued and frustrated. He’s got a self-imposed six days to make it happen, or walk away.

So, that the premise. The intervening six days, ramping up to St. Patrick’s Day are filled with more heated looks, and some promising sexy phone conversations, a missed date, two aborted trysts, and tons of bar hi jinks. The constant undercurrent of desire keeps the sexual tension high, especially when the National Irish Hurling Team pulls into Memphis. These well-put-together gentlemen are more than a bit taken with Frisson, and their captain Corwyn is certainly swoony for Nick. Davis is not happy, but he’s also not out. And it does not seem that this will change.

I liked the book. It’s funny and quirky and downright wacky in parts. There are Little People causing bar brawls and drunk Irishmen, and bad cover bands and a running fight over the possibility of dyeing the beer green–Nick is very much against–but the book lack connection, for me, between Nick and Davis. Nick needs a partner who’s all in, and despite Davis’ words, his actions aren’t quite there. The book ends on a happy note, but it felt more Happy For Now, with conflict remaining about the status of their relationship. There were very tender words exchanged, but I never saw one public declaration on the part of Davis to either claim or acknowledge Nick as a partner. As a reader who adores swoony romances, it left me feeling a bit cold toward these guys. Well, mostly Davis.

The oddest thing was, there were people in the book who totally would have supported them. Davis is closeted because his absentee dad is a powerful judge. *shrugs* I didn’t see why that was an impediment, if Nick is all that Davis says he is, for him. Davis is a grown man, a 30 y/o combat veteran, with his own income. Why does Daddy have a say in his happiness? Part of why I didn’t love this book was the separation I felt between Nick and Davis, even at the end. The other part was the inexplicably long wait these guys experience before taking steps to be together. Nick’s apartment is blocks from where they work. They get out late at night. They cannot crash there, together, once in a month? Felt a little suspect, which made me continually question Davis’ interest in Nick–pretty much the same as Nick did.

The rest of the book is amusing. Lots of situational comedy. And I’m always a fan of traveling Irish athletes. The mad cap misadventures of the Little People were funny and horrifying, by turns.

Interested? You can find 6 DAYS TO GET LUCKY on Goodreads, Wilde City Press, Amazon, Kobo, Barnes & Noble and AllRomance.

Click on this Rafflecopter giveaway link for your chance to win an e-copy of 6 DAYS TO VALENTINE and a $5 gc to Wilde City Press.
Good luck and keep reading my friends.

About the author:
LE Franks lives in the SF Bay area and writes M/M Romance in a unique mix of humor and drama with enough suspense to produce fast paced stories filled with emotion and passion and featuring characters that are quirky and complicated and sometimes a little bit dark. LE Franks is a best selling author and finalist for 2013 & 2014 Rainbow Awards. Her books are available through her publishers at MLR Press, Dreamspinner Press and Wilde City Press and Pride Publishing and online bookstores.

6 thoughts on “Giving Him 6 DAYS TO GET LUCKY–Review and Giveaway!”