Hi there! Today I’m sharing a review for a contemporary M/M reconnection romance from Elizabeth Noble. GONE AWAY is a thriller with a romance mixed in. I really was blown away by the plot and how realistic the danger felt.

Be sure to drop down and enter the giveaway for your chance at winning one of Elizabeth’s many published titles. 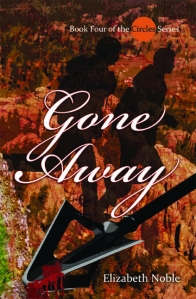 About the book:
Mason Arquette isn’t one for mincing words. In fact, he often rubs people the wrong way—with the exception of Riece Burrell. Riece came with his own set of social issues, but he saw right through Mason’s tough exterior, and they made a perfect couple. Or so Mason thought… until Riece abruptly ended their relationship without much explanation.

Years later, Mason and Riece are thrown back together. As a US Forestry Service photographer, Riece is sent on assignment to the Black Hills, where Mason works. When Mason is tasked with guiding Riece around the territory, old feelings quickly are rekindled.

But nothing is ever easy. Just as Mason and Riece begin to work things out, they’re targeted by people with motives so vile and twisted they defy imagination. In a desperate race for their lives, they must depend on one another and take a big step out of their personal comfort zones to find their way back to safety—and back to love.

“Hungry?” Mason poked at the campfire he’d started. This spot was a popular one. There was already a fire pit rimmed with rock and stone, set against an outcrop and facing a small stand of trees. Whoever constructed it had clearly thought out the location well. The trees were far enough away to be of minimal danger from the fire, yet close enough to be convenient for hanging food from. Their fire was protected by the outcrop and the shallow pit.

Riece turned and studied Mason and their camp. He grinned and raised his camera to take a few more pictures. “You photograph very well.” Riece walked over and sat beside Mason. “Want to see?”

“Sure. If I don’t like them, do they get deleted?”

“No,” Riece said and rolled his eyes. He settled on the ground beside Mason and leaned against him while going through the photos he’d taken that day.

Without thinking, Mason lifted one arm and put it around Riece, tucking him close to his side. “Those are pretty good. Even the ones with me in them.” Both of their actions seemed natural and easy.

Riece snorted and pulled the micro-memory chip out. “Of course they are. I have excellent technique.”

Mason laughed and handed Riece his bag. Riece extracted a plastic case, slipped the chip into one of the slots, and put a new one in the camera. “What’s on the menu?”

“Chicken burritos—well, my version. I threw some potatoes on to bake too, and the all-time campfire favorite of s’mores.”

“Oh, nice. I haven’t had those since I was a kid. My mom used to make them for me over the stove.”

“You haven’t had s’mores until you’ve had them made over an open fire,” Mason said.

Riece tucked his camera away, and they set about assembling and eating their dinner. Mason squeezed shredded chicken from foil pouches onto tortilla wraps. They added shredded cheese, some salami, and dried fruits and spices to the mix. Mason rolled them in foil and set them on the hot embers from the fire to warm up. Dried power-drink mix to add to their water completed the meal. It was completely dark by the time Mason loaded skewers with marshmallows for roasting.

“That was pretty good.” Riece leaned against his pack and gazed up at the sky.

Mason laughed. “What were you expecting, squirrel meat?”

“I was worried about what we were going to eat. I’ll admit I had visions of freeze-dried food packets. I didn’t really pay attention when you were packing. I was afraid to look too closely,” Riece confessed.

“Tomorrow we’ll be near a river, and we can score some fresh fish and use our water filters to refill our bottles. I’ll show you how to spear fish.” Mason stood and stretched. When he began collecting their food stocks and garbage, Riece immediately joined in, helping him. “Anything like toothpaste or mouthwash we’ll store in our sack as well. That stuff smells good to wildlife too.”

“We can keep the lube with us, right?”

That made Mason laugh. “I wouldn’t dream of having it any other way. It’s nice enough out tonight. I can set the tent up, or we can sleep without it.”

“If you don’t mind, and if the wildlife will cover their eyes, I’d like to be able to see the open sky.” Riece sat cross-legged near the fire and pushed his hands against the ground. “Sort of hard and lumpy.”

“You’re such a city boy,” Mason said with a chuckle. “That’s what I brought a sleeping pad for.”

“Now who’s being a city boy? I was thinking more along the lines of how comfortable you are to sleep on.”

Mason smiled, rolled his eyes, and shook his head before he went about completing the task of getting their sleeping area readied. Riece packed their food in the bear bag they would use to secure it high enough off the ground it would be safe. Using a rock and some utility cord, Mason showed Riece how to rig it between two trees.

“We’ll use this as a base camp, hike farther out tomorrow, and come back here to sleep before heading to the next area you need to go to,” Mason explained. He’d spread the map out and traced their path with one finger.

Riece looked over his shoulder. Mason could feel his warm breath on the back of his neck and how he nodded every few seconds. Eventually Mason spread the sleeping pad out, and Riece inflated it before arranging their bedrolls over it.

The temperature dropped fast after the sun went down. Riece was lying on his back, arms bent under his head, looking up at the sky. They’d hiked quite a way that day, and Mason was getting tired. He spent a few minutes watching Riece. He’d folded his clothes and neatly placed them in his backpack, which made Mason smile. Even in the wilderness, there were some things Riece would do to follow his routine, and there was no stopping him. Mason had learned long ago trying to make Riece give up too many of his habits too quickly would cause him to close off and withdraw. Something Mason wanted to avoid at all cost.

Mason stripped off his clothes before he slid into the bedroll with Riece and wrapped one arm around his waist. Despite the cool night air, he was warm in seconds with Riece’s body against his.

My Review:
While this is the fourth book in a series, it can be fully enjoyed as a standalone.

Mason Arquette is a mixed-race (white and First Nations!) gay US Forest Service ranger whose territory covers the Black Hills region of South Dakota, his homeland. Years ago he met Riece Burrell at college. Both Riece and Mason have some emotional issues; Mason has a temper and Riece has OCD and crippling social anxiety, but they fit well together in spite of those impediments. They had a satisfactory relationship that ended when Riece left suddenly, with no discussion. As it turned out, Riece’s mother counseled her son to leave–making it clear that Mason wouldn’t continue to tolerate Riece’s tics indefinitely. (Thanks, Mom!!)

So, after three years they are reunited when Riece is assigned to photograph parks in Mason’s jurisdiction. Mason surprises him at the airport, and again, when he takes them to a romantic inn en route to their destination. While Riece and Mason have separate rooms, Riece can’t take the separation any longer. They seem to get on like a house afire, burning up the sheets anyway….

After getting Riece settled in Custer the ardor ebbs, a bit. Mason wants time to regroup, and be sure he can trust Riece again. They have an extended hike planned so Riece can get images of some of the more remote vistas, and while their reconnection is still going strong, it suddenly gets thrust into overdrive. Encountering some shady characters on the trail has Mason thinking of remote meth labs or poachers, but it’s far, far worse.

No, Mason’s soon employing all his backwoods tracking skills to keep himself and Riece out of the range of lethal crossbow bolts. Nothing like some psychotic killers to make a scenic trail harrowing, amiright? I really got into this thrill ride, as it truly was something I hadn’t expected. Expect bloodshed, mayhem and daring forays. Expect Mason and Riece to fully repair their breach and become better than the couple back in college–excellent sexytimes, yo. Also, expect slurs of all varieties–including homophobic and racial. Just sayin’.

Interested? You can find GONE AWAY on Goodreads, Dreamspinner Press, Amazon, Barnes & Noble and AllRomance.

Click on this Rafflecopter giveaway link for your chance to win a book from Elizabeth Noble’s giant backlist!
Good luck and keep reading my friends!

About the author:
Elizabeth Noble started telling stories before she actually knew how to write, and her family was very happy when she learned to put words on a page. Those words turned into fan fiction that turned into a genuine love of M/M romance fiction. Being able to share her works with Dreamspinner is really a dream come true. She has a real love for a good mystery complete with murder and twisty plots as well as all things sci-fi, futuristic, and supernatural and a bit of an unnatural interest in a super-volcano in Wyoming.

Elizabeth has three grown children and is now happily owned by an adorable mixed breed canine princess and one tabby cat. She lives in her native northeast Ohio, the perfect place for gardening, winter and summer sports (go Tribe!). When she’s not writing she’s working as a veterinary nurse, so don’t be surprised to see her men with a pet or three who are a very big part of their lives. Three of Elizabeth’s books have received Honorable Mentions in the Rainbow Awards.