Hi there! today I’m sharing my review for a funny contemporary M/M romance from LB Gregg. WITH THIS BLING is the third book in the Romano and Albright series, and it’s a fast-paced adventure/romance. 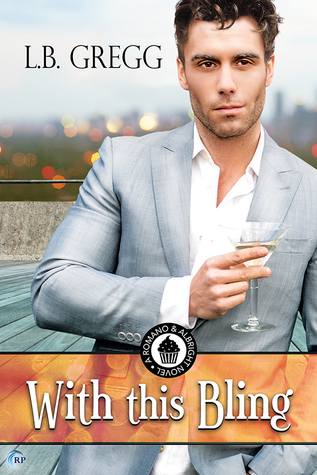 About the book:
Caesar Romano’s catering career is doing better than he’d ever dreamed. And so is his love life—even if his boyfriend’s house in Staten Island is way too far from civilization for his liking. But then in short order, Caesar is duped into helping his cousin propose, is tricked by his best friend and business partner into appearing on live television, and is harassed by a thug-like personal trainer and his far too beautiful wife. In fact, Caesar is almost too busy to notice that something is troubling his PI boyfriend, Dan Albright.

Laid-back, open, charming—that’s the impression hunky former NYPD Detective Dan Albright gives everyone. Caesar can add sexually adventurous and a bit of an exhibitionist. But he also knows that Dan is hiding something—something dark and a little dangerous—and when Dan’s silence over his mysterious past threatens to harm them both, it’s Caesar’s turn to save the day.

But then again, a break-in, a gallery party, an heirloom ring, a new suit, and a stalker with bad BO are all just a typical week for Caesar Romano.

My Review:
This is the third book in a series, but it read fine as a standalone. 4.5 Stars.

Caesar and Dan have been dating for a short while. They are still getting to know one another, and enjoying their incendiary passion. Dan is a 40ish former NYPD cop turned private detective. He’s big and bossy and totally gone for Caesar, a 28 y/o Brooklyn native and member of a giant Italian famiglia that may or may not have mafia ties…he’ll never say. Out loud. Caesar has begun managing his friend Poppy’s catering business, and his cousin is trying to woo a very pregnant Poppy to FINALLY marry him.

Caesar is caught in this misfire/crossfire wedding proposal gone totally wrong when he is pressed into filling in for morning-sick Poppy on a local cable morning show. It’s actually quite hysterical, and leaves Caesay a black-eyed, bloody (possibly engaged!) mess. Is this the result of using his Nonna’s cursed rings? The jury is out…

Dan’s newest case is bleeding into their private life, too. Expect parkour-style espionage and explosions. Lots of explosions. Caesar always seems to be on the wrong end of a concussion, and yet, his dead-pan NYC humor is riotous. Complaining that the squirrel and bird he spies in Dan’s Staten Island backyard is “too much nature” for him. Deciding that the best way to handle being kidnapped and stuffed into a cool box is to snack on fresh-made cannoli? I died.

I loved Caesar’s family. From his flashy Nan to his Goodfellas-esque uncles and father. They’s good people. We don’t get to see much of Dan , as Caesar tells this story, but he’s a bit of alright. Honest, and loyal. Maybe a bit too trusting for some–especially as he’s an ex-cop. Caesar and Dan get really close in this book, so close that Caesar has to meet an ex. Unwittingly. And they continue building on an established pattern of semi-public sexytimes; all to the good in my book.

I breezed through WITH THIS BLING, and would surely head back for another episode.

Interested? You can find WITH THIS BLING on Goodreads, Riptide Books, Amazon, Barnes & Noble, Kobo, and Apple, AllRomance. I received a review copy of this book via NetGalley.

About the Author:
LB Gregg (Lisabea) writes fun, fast-paced contemporary male/male romances for a variety of publishers including Riptide, Samhain, and Carina Press. Her wildly successful Men of Smithfield books feature hot, hunky men looking for love in small town New England. You can find more information about LB, The Men of Smithfield, and her fun series Romano and Albright at her website.  Catch her also on twitter and Facebook.