Hi there! Today I’m sharing a review for a sweet New Adult reconnection romance from Keira Andrews. IF ONLY IN MY DREAMS Puts former best friends in an awkward position–a cross-country drive in a blizzard. Charlie and Gavin have a lot of ‘spaining to do. And, they get it done.
Like bosses. 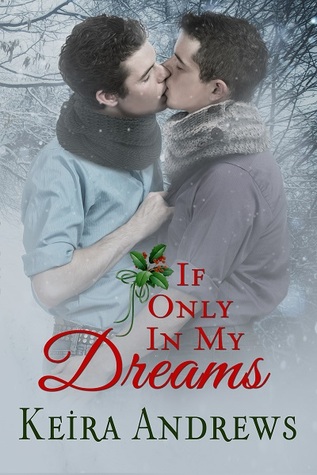 About the book:
To be home for Christmas, they must bridge the distance between them.
Charlie Yates is desperate. It’s almost Christmas and his flight home from college has been delayed. For days. Charlie promised his little sister Ava he’d be home for her first holiday season since going into remission from leukemia. Now he’s stuck on the opposite coast and someone else grabbed the last rental car. Someone he hasn’t even spoken to in four years. Someone who broke his heart.

Gavin Bloomberg’s childhood friendship with Charlie ended overnight after a day of stolen kisses. With years of resentment between them, they don’t want to be in the same room together, let alone a car. But for Ava’s sake, Gavin agrees to share the rental and drive across the country together.

As they face unexpected bumps along the road, can Charlie and Gavin pave the way to a future together?

My Review:
This is a feel good, frenemies-to-lovers New Adult, coming-out, cross-country-drive romance. Whew! I think I got it all…

Charlie and Gavin were best friends the summer before high school began. On Labor Day weekend they shared one hot kiss–the first for either of them–and the next day it was over. Gavin was dating Candace, cheer captain and otherwise It Girl. Gavin never acknowledged Charlie again, excepting that fateful day in the pizza shop.

Fast forward four years. It’s Christmas break and Charlie is desperate to return to Connecticut to spend Christmas with his family, especially his 8 y/o sister Ava. She had spent the last two Christmases in hospitals suffering the complications of leukemia, but she’s in remission (great story there!) and anxious to see her big brother. Unfortunately, the East Coast had been hit by Snowmageddon and San Fran’s airport is in it’s second day of grounding due to Fog-mageddon. There are no flights out, the buses are overbooked, and Charlie’s desperate. His last-ditch effort is to rent a car and drive the 43 hours, but yeah, no cars.

Well, there is ONE car. It’s been rented, but the driver hasn’t left yet. And, it turns out, the driver is going the exact same way Charlie would be–because it’s Gavin and their family homes are on the same street back in Connecticut. There’s a whole lot of tension in that tiny Jetta!

In the four day drive, they experience the traditional Airing of Grievances, oh wait that’s a Festivus ritual. Well, anywho, Gavin and Charlie slowly reveal their fears and issues. There’s mishaps and mayhem and matching sweaters and pancakes with fake maple syrup. And love. Because Charlie never forgot Gavin, and Gavin always remembered Charlie, no matter how deep he buried him in his closeted consciousness.

It’s such a sweet story, with real guys finding real love. There’s lots of love to go around, in truth. Charlie is a devoted brother to Ava, and they have a deep bond with touching rituals and open affection. Charlie’s parents are care worn but lovely, and include Gavin in their Christmas (because he’s special to Charlie, and because he’s Jewish and has no Christmas tradition). Even Gavin’s shell-shocked parents express a lot of love for him (and reservations! They have big reservations!) that helps heal a rift they didn’t even know existed.

It’s a solid HEA, and a sensational holiday story. It was fun to witness all of Gavin’s “firsts” and to know they were also special to Charlie because his tortured love was now at peace. The forgiveness was strong in this story, and that showed a maturity in these two young men that I totally dug.

Interested? You can find IF ONLY IN MY DREAMS on Goodreads, Amazon, Amazon global, AllRomance, Barnes & Noble, iTunes, Kobo, and Smashwords.