Hi there! Today I’m sharing another fantastic historical M/M romance from KJ Charles, this time with a heaping helping of the paranormal. THE SECRET CASEBOOK OF SIMON FEXIMAL is a gorgeously told Victorian story about Robert Caldwell, a journalist, who contracts occultist Simon Fleximal to rid his crumbling ancestral home of the ghost of one of his outre ancestors. It starts out fast and hard, and it ends so dang tender! I couldn’t quit reading it. I adore how KJ writes her stalwart British men. They are so strong and proper, yet so vulnerable. 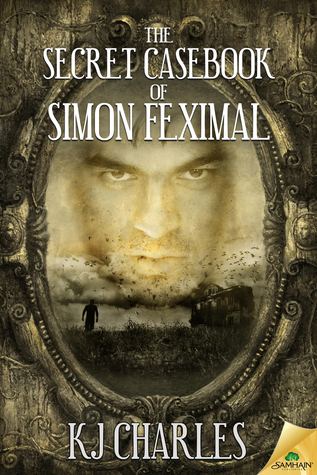 About the book:
A story too secret, too terrifying—and too shockingly intimate—for Victorian eyes.

A note to the Editor
Dear Henry,
I have been Simon Feximal’s companion, assistant and chronicler for twenty years now, and during that time my Casebooks of Feximal the Ghost-Hunter have spread the reputation of this most accomplished of ghost-hunters far and wide.

You have asked me often for the tale of our first meeting, and how my association with Feximal came about. I have always declined, because it is a story too private to be truthfully recounted, and a memory too precious to be falsified. But none knows better than I that stories must be told.

So here is it, Henry, a full and accurate account of how I met Simon Feximal, which I shall leave with my solicitor to pass to you after my death.

I dare say it may not be quite what you expect.

My Review:
This book is written as a series of tell-all vignettes confessing the TRUE nature of the partnership between renown occultist Simon Feximal and his journalist-cum-paranormalist Robert Caldwell. The setting is 1890s London and men are not allowed, legally, to have sexual relations with each other. (But boy-howdy, do they!)

They meet because Robert has a ghost inhabiting his ancestral home. He calls out Simon, who has the ability to communicate with spirits, by means of writings that etch across his skin, when he is in the presence of a ghost. It is horrifying and fascinating to Robert, and the manner of expulsion of his ancestral ghost is sexy-sexy. This was actually so fascinating to read. It could have gone campy, but it never did.

Each chapter is a case; all of them have some heat between Simon and Robert, mostly as a way for Simon to disgorge the coldness that saps him while communing with spirits. I honestly could not get enough of this couple. There could have been a hundred chapters and I’d have continued turning the pages. There are little threads woven in the stories which connect one to the next, but each is unique and interesting while building on the developing love story between these two men.

I won’t say this is tender, because it isn’t. There is tenderness at times, but often it’s harsh and necessary couplings. The desperation they both experience, amid life-and-death encounters kept me captivated. There is incredible tenderness in their small gestures–the ones which need to be hidden to protect them both. Political machinations, revenge plots, destruction, self-sacrifice–it’s all in here. The journal-style of the writing allows an intimate look into Robert’s side of the story and he’s just a dream of an MC. He so adores Simon that it’s impossible not to love Simon through Robert’s POV.

I adored the historical setting, and the old-style British grammar and spellings. I felt like I was there, as gorgeously and clearly as the settings were described. Nothing like a good ghost story–and this book is chock full of good ones.

Interested? You can find THE SECRET CASEBOOK OF SIMON FEXIMAL on Goodreads, Samhain Publishing, Amazon, Barnes & Noble, and AllRomance. I received a review copy of this book via NetGalley.

KJ Charles is a writer and freelance editor. She lives in London with her husband, two kids, an out-of-control garden and an increasingly murderous cat.