Hi there! Today I’m sharing my review of a new contemporary M/M romance from Kaje Harper. LIFE, SOME ASSEMBLY REQUIRED is a sequel that can be read as a standalone. It relates the mundane acts of a newly out gay couple as the traverse the hate-infested waters–and everyday occurrences of life–in a way that is anything but mundane. I really liked it. 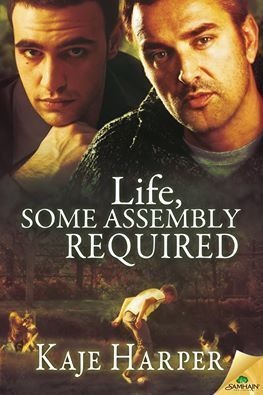 About the book:
Finding love in the ashes was easy. Building a life together? Don’t make Fate laugh.

After spending the first part of his life chasing pretty girls, love has finally come to Ryan in the form of John, a tall, lanky, red-headed landscape architect with wide shoulders and a five-o’clock shadow.

For the first time in his life, love feels easy. Hell, he even ran into a burning building for John and his son, and he’d do it again if he had to. But telling his father and brothers “I’m gay. I’ve met a man”? That’s a bumpy ride he’s not looking forward to.

For John, loving Ryan is as natural as breathing. Now if only the rest of his life would fall into place. Dealing with his teen son is complicated enough, but with his ex-wife causing trouble and his daughter wanting to move in, John’s house—and his relationship with Ryan—threaten to split at the seams.

Would one month without a new surprise knocking him upside the heart be asking too much? If the sound of Fate’s laughter is any indication, the answer must be yes…

My Review:
This is the second book in a series, and I read it as a standalone. I think the reader loses nothing in doing so. I had a brief recap of the previous book in this one, and I’m kinda glad I skipped that book, on account of I get triggers over evil-scientist plots….but that’s MY issue.

John and Ryan are two men who have always had straight relationships but have recently embarked on a relationship with each other. They came to terms with their bisexuality in the first book, and are just trying to figure this “gay thing” out. This causes a lot of conflict within their families.

John is a divorced man with two teenaged children, Mark and Torey. He doesn’t have joint custody, but Mark had run to John in the previous book, and currently lives with John and Ryan, with his mother’s grudging permission. John’s ex, Cynthia, is not cool with the “gay thing”–she and her husband are blatantly homophobic. Cynthia lives in LA with Torey, and John tries to keep a decent relationship for his daughter’s sake.

Ryan’s family is mixed; one brother is totally okay with his orientation, his father and other brother are not. Well, dad’s kinda okay, and he gets better, but Brent is really hostile. I had to give props to his bride-to-be, Anne, who makes Brent adjust his attitude.

Ryan and John are stable, and love each other, but they have a lot of stress–Ryan is a medical student, recovering from burn injuries suffered as a fire fighter. He had recently saved Mark from a fire, and John, Ryan and Mark suffer nightmares over that ordeal. John is a parent, and has the associated parental worries, especially as Mark begins to close in emotionally, and Torey’s calls from LA are becoming more regular and more upsetting–she hates her stepfather, and Cynthia is sick with pregnancy issues (and perhaps depression).

The stress peaks when Torey and Cynthia turn up on their Wisconsin doorstep, essentially destitute. Ryan is afraid that John will reconnect with his pregnant ex, and all his heart will be broken–plus he will have come out and estranged himself for nothing. John is a stalwart and the best kind of man. He only cares for Cynthia in that she’s the mother of his kids and soon to deliver his kids’ half-sister. His love is really more of agape, than amore. I didn’t wonder much regarding Ryan’s angst. Both Mark and Torey really like Ryan, and want him to remain their dad’s partner–and perhaps more.

This book is big on reality. It deals with the mundane in an approachable way. Life is messy, and Ryan and John’s life is especially messy. At times I wondered if the stress would break them apart, but they consistently took steps to come closer; even if Ryan’s motives seem selfish. It’s funny, though. People say love is selfless, and it isn’t always. Motives can indeed be selfish, and still be the right thing to do. Ryan has a right to be suspicious of Cynthia’s motives. She is a crafty gal, and focused on finding a good provider for her infant–and John is a demonstrated good provider.

The end of this book is not the end of this story, I’m sure, but it does end with a solid resolution and a solid HEA. There are some nice sexytimes that, again, are realistic. First times and fun times and aborted missions…which only drew me into this relationship more. I think there were plenty of ways for this book to go wrong, to get melodramatic and absurd, but it never did. It stayed the course and captivated me.

About the Author:
I live in Minnesota, where the two seasons are Snow-removal and Road-repair, the mosquito is the state bird, and where sometimes in winter it can be breathtakingly beautiful. Of course, the deepfreeze chill contributes to the breath-taking, but Minnesota’s a kindly, quiet place and it’s home to me now. I’ve been writing for far longer than I care to admit (*whispers – forty years*), mostly for my own entertainment, and currently am focused on M/M romance (with added mystery, fantasy, history, SciFi…) I also have a few Young Adult stories released under the pen name Kira Harp.

My first professionally published book, Life Lessons, came out from MLR Press in May 2011. My husband finally convinced me that after all that time writing, I really should submit something, somewhere. I was thrilled when it was accepted. I have a weakness for closeted cops with honest hearts, and teachers who speak their minds, and I had fun writing the four novels and three freebie short stories in the series. I’ve been just delighted by the reception Mac and Tony have received.

My first free book became the first story that I actually released – I put it up a month before Life Lessons just for the fun of getting it out there. Lies and Consequences began as a reaction to the November 2010 election. It looked like the repeal of DADT might be derailed by the political shift and I put the insanity of that law into the book. Then as I was finishing the first draft in mid-December the repeal passed. Which was great, but prompted a rewrite to a lighter and more action/romance book. This was a solo effort and I learned a lot from writing and releasing it and from the reviews. Check Smashwords for that one and many of my other freebies.

I now have a decent backlist in ebooks and print, both free and professionally published. A complete list with links can be found on my Books page. This writing thing is addictive. So read, comment, tell me what you like and what you don’t, and help me make the upcoming books even better.

You can find me to chat on my author page here on Goodreads most easily – I hang out on Goodreads a lot because I moderate the Goodreads YA LGBT Books group there. I also post free short YA stories on that group, more than 50 of them so far.

You can also find me on my blog.