Hi there, folks. Today is a landmark day in the struggle for equal rights for LGBTQ persons in the US. On June 26, 2003 the Supreme Court ruled on Lawrence v. Texas invalidating sodomy laws in the US under the 14th Amendment. On June 26, 2013 The Supreme Court ruled on Windsor v. United States to strike down the 3rd clause of DOMA (Defense of Marriage Act) that removed the federal definition of marriage to solely be between heterosexual couples under the 5th Amendment. I could be wrong, but I (and the various news outlets) expect the Supreme Court will render a decision in Obergefell v. Hodges today, which is expected to deem all anti-same-sex marriage laws, in the final 13 states which hold them, unconstitutional. I really hope this comes to pass. Disclaimer: I’m a straight, white, heterosexual woman who is also a feminist and equal rights activist. As if you didn’t know!

So, in honor of these legislative victories, I’m featuring a good old gay romance set in Florida, the Sunshine State, a place where gay marriage may now be legal thanks to the Supreme Court ruling I expect to be released. FOR A REASON is a tender romance between two men who deserve a strong, loving partnership. 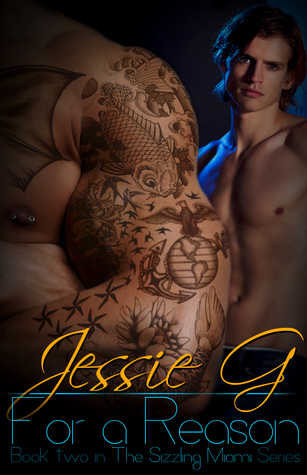 My Review:
I received his book via Goodreads’ Don’t Buy My Love program in exchange for an honest review. This is the second book in a series but can be enjoyably read as a standalone.

Ian Jones is a 25 y/o out gay man who has long known he was a throwaway–because he actually was, twice in his life, tossed into a dumpster and left for dead. He survived hellish foster care, barely, and even completed college. He has no one in the world who knows/cares for him, and he’s moved to Ft. Lauderdale, FLA with the grim determination to build a life for himself. Despite a computer science degree, he can’t find full-time work, and his clunker of a car breaks down on his trip to Miami on his way to yet another interview.

Bull Connor is a large and in-charge mechanic, who picks up Ian and his car. Bull’s a former special forces soldier, but he now serves as a surrogate parent to his three younger siblings and as a mentor and rehabilitator to a group of ex-cons he’s trained to work his garage, who also live in his halfway house. Bull likes to help, and he’s got a serious hero complex, so refusing to leave Ian in his near-homeless Ft. Lauderdale roach motel is not even a question.

Against Ian’s protests, Bull insists on taking him to his own home–offering Ian a clean, safe bedroom, and an office job at the garage. Too good to be true? Ian thinks so, but he’s happy to be proven wrong.

After a week or so of both men sharing close quarters, they decide to become more than roommates. It takes time for Ian to really share himself, emotionally and physically, but Bull’s patient. For both men, they find a sense of security they have lacked. Bull’s used to people needing/using him, and Ian’s stalwart stance on independence is very welcome. Ian wants to feel loved, and Bull–with his large family and extended family of employees–becomes the loving community that Ian has always craved.

And, then there were more….Ian is challenged when people from his past turn up, but he’s able to get through the emotional turmoil with Bull standing beside him.

I really liked this cast of characters. I didn’t read the first book, but didn’t feel the lack-all relevant details are seamlessly woven into this story. Both Ian and Bull are such great guys, and their growing affection is wonderful to witness. There is a good amount of sexytimes with a little kink–light dominance, nothing more–and even that melds into really tender experiences for both Bull and Ian. I adored how Bull’s “people” for lack of a better word, took Ian as their own, and made him theirs, too. There seem to be many stories in the offing for this cast, and I’d gladly go back for more.

Interested? You can find FOR A REASON on Goodreads, and Amazon.

Thanks for popping in, and make sure to visit my fellow Coffeehouse reviewers. Peace and love, y’all!

10 thoughts on “Cephalopod Coffeehouse June 2015–FOR A REASON”