Hi there! Today I”m sharing my review for ZA Maxfield’s MY COWBOY PROMISES, a contemporary cowboy M/M romance. This one has a less-upbeat story, featuring a severely closeted character living with the fallout of his “out”-ing. I had a bit of heartbreak for Ryder, and was glad that his life turned around for the better. Make sure to scroll down and enter the $25 Amazon GC giveaway. 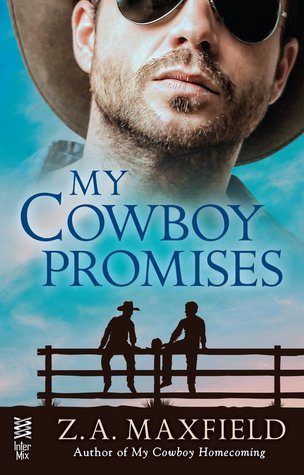 About the book:
A real man needs a real love…

To become the man he’s meant to be, one cowboy will have to be the man he never wanted anyone to know he was…

Ryder Dent is a true-blue cowboy. A devoted son, husband and father, but one who is living a costly lie. When they were both young, Ryder and his closest female friend Andy thought they’d found the perfect solution to both their problems—she was single and pregnant, and he was secretly gay—so they got married and raised Jonas together.

When Ryder gets hurt at a party, his son’s new pediatrician comes to the rescue. The connection between Ryder and Dr. Declan Winters is sudden, powerful, and undeniable. Ryder loves Andy and the family they’ve created together—but they both need more. Can they pursue their hearts’ desire without destroying the life they’ve built and losing the son they love?

How about a little taste? This is the scene where Ryder is struck by a Declan lightning bolt…

The hottest guy I ever saw was playing “Pop Goes the Weasel” on the piano while fifteen cagey preschoolers circled fourteen chairs. My father-in-law’s annual Fourth of July shindig—the biggest event of the year—was a family picnic. We’d set aside a play area for the littlest kids and I’d volunteered to supervise, but the piano man blindsided me and I nearly missed an outrageous hair- pulling incident.

Like a too bright pair of headlights on a moonless night, he was all I could see.

Mayor Calder Hamilton—a cartoon bear of a man with a white handlebar mustache—snuck up on me with one of those painful backslapping man hugs.

“Ryder Dent, you son of a bitch. Which one is your boy?”

“I know that look, I see it every day when I look in the mirror. But how can that be him? Last time I saw him he was half that size.”

Why do people always say that? Is it some rite of passage? Am I going to be surprised kids grow someday too? “We had to buy him a new pair of cowboy boots just last week.”

“She doesn’t come to these things to hang around with me.” I glanced toward the windows. “You’ll find her wherever there’s dancing.”

“She leaves you in charge of Jonas?”

“Gosh, yeah. Andi’s the social one. She likes to kick up her heels and I don’t mind if she wants to have some fun.”

“So have you met our new doctor yet? Isn’t he something? I have never seen anyone play piano like that.”

“That’s Doctor Winters?” The doc had started playing “Pop Goes the Weasel” like a Russian folk dance, all the while yelling Hai! Hai,! Hai! Hai! The music stopped and the chaos started. Jonas ended up on another chair.

“Go, Team Jonas!” I pumped my fist like a goofball.

“Yeah. Go, boy, go!” Hamilton was already tipsy enough to be unaware he was shouting right in my ear. It didn’t matter; I was going deaf from all the kids squealing anyway. “I’d like to ask your help with something.”

“I need you and your family in a campaign ad”

“My family?” Good grief. Bitterroot’s founding fathers would shit in their graves at such an idea. “I don’t think we’d make a very good ad.”

“C’mon.” He punched my arm. “You and Andrea are both attractive. Jonas is a cute kid. You had to make some tough choices in the beginning, but look where you are now.”

“I need a family exactly like yours to represent my campaign to the twenty-somethings. I need them to believe they’re important to me.”

Me and Andi? My stomach did a full 360, front to back, as if I was on a Six Flags ride. Mayor Hamilton wanted some picture-frame perfect family, and we were not it. Plus, we hadn’t exactly voted for him. “I’ll ask Andi about it, but—”

“Andrea’s dad just told me he’s backing me all the way again this next election.”

“Is he?” That figures. Her dad likes politicians to owe him.

“So you just tell her you’re doing it, okay?”

Hamilton’s wife, Sally, came up to collect him. “C’mon Cowboy. There’s someone I want you to meet.”

She grabbed his hand and, after a good-natured tug-of-war, they left together. I breathed again. Andi’s dad ran one of the most successful ranches in the area. If he wanted to see my family on a billboard, I’d have to figure a way to get out of it or learn to say “cheese.”

It was pretty hard to say no to Sterling Chandler. I’m not sure he understood the word.

The new doc managed to make “Pop Goes the Weasel” sound like a funeral dirge and the children all lurched around like little zombies. Then he turned it into a raucous honkytonk song.

Who was this guy?

Jonas got eliminated fourth from last but he wasn’t crushed by the loss. His attention shifted right away to the buffet, where the cater-waiters had installed several trays of Texas-sized cookies, all colored with red, white, and blue sugar crystals in honor of the holiday.

Musical Chairs, the Survivor edition, came down to two particularly crafty-looking femme fatales. One wore a jeans skirt, cowboy boots, and a pretty white blouse, and the other had on a daisy-printed sundress with lacy socks and jelly shoes. Lacy socks girl won by body-checking white blouse girl out of the way and pouncing on the last chair. She gripped the seat so tight with both hands no one could get her off it.

The new doc consoled the runner-up with a box of big-block Legos and gave the winner a play set with pink and purple Ponies but it seemed she thought she was getting the chair as her prize. Eventually her mom pried her up and they all wandered off to join the party outside.

Doc Winters was left to tidy up. I figured I ought to help, being family and all. Plus, it might get me out of small talk outside.

But the doc was the best looking man I had ever seen up close. I was bound to mess up and say something super stupid, and Andi was going to hear about it, and then she was going to tease me for the rest of my life, because she was just waiting for me to lose my shit over some guy.

He could be the guy.

My Review:
This is the fourth book in a series, but can be read as a standalone.

Ryder is a stalwart, honorable man–for 23 y/o. He’s gay, and only out to his wife, Andi. He and Andi have been friends since childhood and when she was to become an unwed mother from her pursuit of a completely unsuitable (and uninterested) man Ryder stepped in and took care of Andi and Jonas, foregoing a football scholarship that would have taken him far away from his small-town and the anti-gay prejudice. Ryder has been a faithful husband. Well, that’s not true. He’s been a monk and Andi’s been a nun. They share a bed and parental roles, but not their bodies. Ryder has always been Andi’s biggest cheerleader and encourages her to follow her dreams, even though it goes against her father’s wishes.

I liked large parts of this story. I’ll be honest that the “open” marriage solution was not my fave. I know, I know, it works for some folks, but I like my romance with a heaping helping of honesty. A large part of the book was devoted to keeping Ryder’s secret, and it added to the tension, but I was a little uncomfortable with it. Yes, Ryder does come out–and it is like a nuclear bomb in his life. He’s not sure if Andi will follow her homophobic father’s advice and move out–taking his beloved Jonas away. Ryder’s father isn’t best-pleased, either, with extreme risk of both Ryder’s home and job in the balance. And there’s fallout for Dr. Winters–his small-town medical practice might be sunk.

I thought that the resolution of all this heartache was well-told. I do like to see when families heal, and deal, once the dust settles. I’d say that the exact nature of Ryder’s relationships are more honest and stable at the end of the book, and for that I was happy, but it happened more by default than design. I didn’t get the resolution I wanted between Ryder and Jonas, but only because the focus was more on Declan and Ryder, and Andi. Andi had the opportunity to really twist the knife on Ryder, especially as she was essentially destitute and with a small child without Ryder. Her financial issues could have led her to accept her father’s mandates and money. But she made good choices about that, and Ryder was clearly the best Daddy evah.

Having known teen parents quite closely, I’ve seen some of the unhealthy relationship dynamics they experience–Andi, Ryder and Jonas were some of the best emotionally adjusted characters I could have imagined. There wasn’t a lot of sexytimes, but they were good. I guess I just wish there had been more openness, that Ryder could have been open about his sexuality, which would have allowed me to experience that euphoria more. Don’t expect a lot of cowboy life–a couple trail rides is all you’ll find–though growing up and working on Andi’s family ranch, Ryder runs the ranch supply store in town.

Interested? You can find MY COWBOY PROMISES on Goodreads, Amazon, Barnes & Noble, iBooks, Kobo, and All Romance.

Be sure to check out all the books in the Cowboys Series.

About the Author:
Z.A. Maxfield started writing in 2007 on a dare from her children and never looked back. Pathologically disorganized, and perennially optimistic, she writes as much as she can, reads as much as she dares, and enjoys her time with family and friends. If anyone asks her how a wife and mother of four manages to find time for a writing career, she’ll answer, “It’s amazing what you can accomplish if you give up housework.”

Her published books include Crossing Borders, Drawn Together, and the St. Nacho’s and Brothers Grime series from Loose Id, ePistols at Dawn and The Pharaoh’s Concubine from Samhain Publishing, and Notturno, Vigil, Stirring Up Trouble, and All Stirred Up from MLR Press.