I’m back on Joyfully Jay reviewing a new release from Jamie Dean. THE STORY OF JAX AND DYLAN is a cute friends-to-lovers, contemporary reconnection, M/M romance form Jamie Dean. If you’ve ever wondered “Whatever happened to…?” about someone from your past, and thought about contacting them on Facebook, you’ll totally get this book. I really enjoyed it. 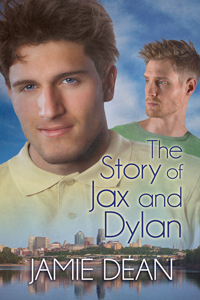 Dylan and Jax were typical best friends, until Dylan fell for Jax and kissed him the night before senior prom. Dylan had to move away before they could talk about it, so he has spent ten years thinking Jax hated him for that kiss.

Reconnecting on Facebook allows them to meet again, and they quickly become as close as ever, spending most of their free time together. Dylan falls for Jax a second time, even though Jax has a girlfriend and appears to be straight.

Important secrets about Jax may lie hidden in the books he’s written, but Jax has asked Dylan not to read them, and Dylan refuses to break his promise. When the truth finally surfaces, their lives will never be the same.

Head on over to Joyfully Jay Reviews to check out my full review.