Hi all! Today I’m sharing in the blog tour for for Vivi Barnes’ new YA romance, PAPER OR PLASTIC. It’s a sweet tale of love, loyalty and friendship. For other stops on the tour, click here. And don’t forget to enter the giveaway below! 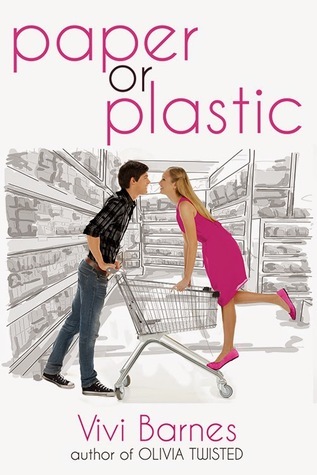 About the book:
Welcome to SmartMart, where crime pays minimum wage…

Busted. Alexis Dubois just got caught shoplifting a cheap tube of lipstick at the local SmartMart. She doesn’t know what’s worse—disappointing her overbearing beauty-pageant-obsessed mother for the zillionth time…or her punishment. Because Lex is forced to spend her summer working at the store, where the only thing stranger than the staff is the customers.

Now Lex is stuck in the bizarro world of big-box retail. Coupon cutters, jerk customers, and learning exactly what a “Code B” really is (ew). And for added awkwardness, her new supervisor is the totally cute—and completely below her social sphere—Noah Grayson. Trying to balance her out-of-control mother, her starting spot on the school softball team, and her secret crush on the school geek makes for one crazy summer. But ultimately, could the worst store in the world be the best thing that ever happened to her?

My Review:
Lex, as she likes to be called, is a 16 y/o girl growing up near Tampa, Florida. She’s pretty, and popular and the star pitcher on her softball team. She has some close friends, among them Sydney, Courtney and Bryce. Bryce is a star baseball player and he’s helped Lex with her pitching for years. They even volunteer together at a baseball camp for needy youth. Despite having plenty of cash, Lex is caught shoplifting.

She knows it’s dumb, but can’t help rebelling a little. Her mother is preoccupied with her 7 y/o sister Aurora who easily conforms to Mama’s ideal beauty pageant child, unlike Lex. And, Lex’s grandma is rapidly declining with Alzheimer’s disease…so things are bit out of control. Taking the lipstick seemed a harmless prank, until her mother got involved. Now, instead of whiling away her summer, Lex is working at the SmartMart (think WalMart) on the condition that she does a good job, the police will not be notified. It’s, well, mortifying.

Mean girls come in to taunt the Princess of SmartMart, and Lex is missing softball practice due to schedule conflicts, prompting pushback from her coach. And worst/best of all? One of Lex’s managers is a senior at her high school–Noah–who is a categorical NOBODY after turning Bryce in for a vandalism episode two years prior.

Thing is, Noah is nice. And, cute. And, Lex is determined to show up her mother, by being responsible–for a change. In the meantime, Lex learns the truth behind appearances. Maybe Bryce is petty for holding a grudge so long. Maybe the goofy greeter lady at SmartMart is the most positive, loving girl Lex’s ever met. And maybe Noah’s the sweetest, most forgiving person in the whole wide world–someone she shouldn’t cast aside on a misplaced loyalty.

I really liked this one. Lex is a human girl, with human feelings of inadequacy and fear. Her Grandma is slipping away, and she and her mother don’t connect well. She’s losing her dominance in softball, and feeling very disloyal to a good friend. But she sees the best in people, and she works hard, and refuses to give up. The romance between Noah and Lex blooms slowly, with Lex alternately dependent upon (and frustrated with) Friend Zone status. The closer she and Noah get, the more guilty she feels on Bryce’s behalf, but in the end Lex makes the choice that is right for her, not anyone else.

This is a sweet book, with an interesting and well-paced plot. There are elements of domestic violence which may be a trigger for some. The innocent romance is age-appropriate to teen readers and the life-lessons Lex learns are suitable for everybody on the face of the Earth.

Interested? You can find PAPER OR PLASTIC on Goodreads, Amazon, B&N, Kobo.

Click the Rafflecopter link below for your chance to win
one of 2 Prize Packs (US only) containing a $15 Target gift card, PAPER OR PLASTIC journal and tote bag
a Rafflecopter giveaway

About the Author:
Vivi Barnes is the author of Olivia Twisted and the upcoming release, Paper or Plastic. She was raised on a farm in East Texas where her theater-loving mom and cowboy dad gave her a unique perspective on life. Now living in the magic and sunshine of Orlando, Florida, she divides her time writing, working, goofing off with her husband and three kids, and avoiding dirty dishes.