Hi there! Today I’m reviewing BRIT BOYS: ON BOYS, a collection of 8 M/M novellas written by 8 top British M/M authors. This anthology is currently priced $.99 through January, so you may want to scoop this one up right away if you like M/M at all. 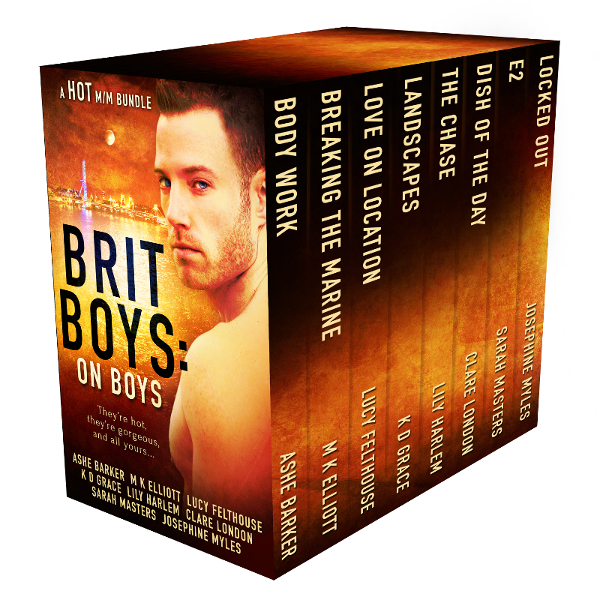 About the book:
From east to west and north to south, these British boys are having a blast in and out of the bedroom with the men of their dreams. They’re topping and bottoming from London to Cardiff, living out fantasies in the wildest fells and hooking up while serving HRH Queen Elizabeth II.

With passion and lust the name of the game, nothing is off limits. Throw in honed muscles, high-strength testosterone and an accent to die for and there is nothing they can’t do and no one they can’t get in this world or another.
***This is an adult read for explicit depictions of sex***

My Review:
M/M Romance + Brit speak = SWOON! I’m a noted Anglophile and a huge fan of gay romance so putting both of these into a giant anthology is a dream-come-true, for me. This 8-novella compilation is mainly contemporary romance, but has a couple curve-balls, too.

All the books have sex on the page, and it is totally steamy. Below are some quick reviews of each story. Beware: There’s a whole lotta manlove going on, and I adored every word of it.

Contemporary Boy on Boy:
Bodywork by Ashe Barker puts Graham in the path of Alex, quite literally. A fender-bender links these two lonely men with each other in a way that transcends the accidental. Of course, secrets from the past creep in, but love wins out…eventually.

Breaking The Marine by MK Elliott is a military romance. Brandon enlists in the Marines to escape an empty life heading for prison. He meets a random stranger, Will, the night before boot camp, and their tryst is hot and quick–with no plan to re-engage. Unfortunately, Drill Instructor Will Stewart wasn’t prepared to have Brandon in his service. The tension is high, and the passion simmers as these two continue clandestine relations. Going Commando was never so hot.

Love on Location by Lucy Felthouse matches rising star Theo Samuels with a cast extra, Eddie. Problem? Theo is closeted, and he can’t imagine a relationship with the demands of his acting schedule. Eddie’s younger and not out, either. Plus, he’s essentially jobless and not sure of his career path. There’s a bit of kerfuffle regarding the state of attraction, but the end result is bliss.

Locked Out by Josephine Myles puts a timid kindergarten teacher in the role of aggressor. Martin spends his Valentine’s consoling his sister–after her dramatic break-up–at a posh hotel. Drunk and needing the facilities, he finds himself naked and locked out of his hotel room in the middle of the night. Rod greets Martin with humor, and interest. Martin, ashamed to have never even had a single one-nighter, employs his sister’s advice, finding that Rod is all too happy to have a dominant lover. The encounter stayed with Martin, even if he ducked away without a trace. Imagine his surprise finding Rod is new to their town, and eager to renew their…acquaintance.

Contemporary Boy On BOYS….
The Chase by Lily Harlem features a couple–Steve and Robert–who are only just reconciling, on the scavenger hunt for Carrick, an up-and-coming comedian who has expressed an interest in a menage meet-up. While Steve and Robert seek clues in the bitter cold, they reconnect. And the eventual tryst is wet and wild.

Dish of the Day by Clare London matches three best friends into a new menage romance. Richie’s worked his way from line cook to head chef. On the night of his first opening as a restauranteur everything goes amiss. Busted crockery, drunken sous chefs, thieving employees…Richie’s two steps from mental when his college mates, Craig and Ben arrive. Their confession–that the opening isn’t going off–is the last thing Richie wants to hear. Good thing they’re prepared to ease his mind, and body, in the most delicious way.

For those who love something different:
E2 by Sarah Masters is a sci-fi post-apocalytic romance featuring Dan and Archie. The Change has wrought devastation on London, a fate Archie escaped only by having called in sick to work the day the stones fell from the sky. Still, he’s lonely and all his family was killed in the destruction, or so he thinks. A chance encounter with Dan, a refugee from The Other Side, leaves Archie with more questions than answers, and the knowledge of a governmental plot to determine the root of homosexuality.

Landscapes by KD Grace is a paranormal romance that features an interesting triad–between Alonzo, Reese and Talia. I really enjoyed the interplay between the dream-state and the reality. And, though Reese had every reason to be angry with Alonzo’s machinations, I was glad they resolved their quarrel.

Some cool words from these awesome British M/M authors
Where are you from in the UK and does this influence your writing?

M.K. Elliott
I’m from Devon, but I’m not sure if this influences my writing or not. I guess in the case of ‘Breaking the Marine’ where I am from was quite useful as the Marine Commando School is just down the road and I’ve driven past it numerous times. But I’ve lived in several other countries and places in the UK, plus I’m married to a Kiwi, so I like to think I’m fairly multicultural.

Lucy Felthouse
I’m from south Derbyshire, in England. Pretty much right in the middle of the country. In fact I’m just a few miles from the village which is officially the furthest from the sea in England. It doesn’t consciously influence my writing, I don’t think, because I write stories set all over the UK, depending on my inspiration. Some of my much shorter works could, in theory, be set anywhere. But I guess, because I don’t spend much time by the sea, that more of my stories are set inland. I have a particular fondness for stately homes and the British countryside, which I think is clear in my work, especially my novella in this collection!

Clare London
I was born by the seaside at Brighton, but have lived most of my life in London. It’s a busier, more cosmopolitan area than other parts of Britain, so I hope to reflect that in my characters.

KD Grace
I live in Surrey not far from London in what is known as ‘the Soft South,’ and while some of my stories are set in and around London, a lot of them are set in the Lake District because if there’s a place in the UK where my heart is, it’s there.

Ashe Barker
I grew up in Yorkshire, and still live there although I travel a lot. I think it does influence my writing as I often draw on Yorkshire characters and places for inspiration. I feel a sort of responsibility too, to present the place I love in a good light. I want readers to like it too.

Sarah Masters
I’ve recently moved “oop north” from the south, but most of my life I’ve lived in Oxfordshire. I can’t imagine writing a Northern tale, so yes, my southern upbringing influences my writing.

Lily Harlem
I lived in London for a long time, working as a nurse in a busy trauma unit. I now live in the countryside, in Wales. I love it here, it’s very peaceful which makes it perfect for writing. I’m lucky in that I have lots of memories and characters to draw on from a time when my life was crazy busy. The space and the open fields and of course the coast give my imagination time and space to run wild. I do most of my plotting when walking on the beach with my dogs.

Josephine Myles
I’m originally from Buckinghamshire, one of the “Home Counties” making up the London commuter belt. However, I’ve spent all of my adult life in my adopted home of Somerset, and I set most of my stories out here in the West. People in the West Country seem to be more down to earth than Londoners, and there’s an interesting mix of hippies, artisans and now media types who’ve moved down here and regenerated some of the run-down towns. All of this makes for an interesting backdrop to a story, and I often write about creative characters who’ve come west for a better life.

Click the Rafflecopter link for your chance to win
A and of a DOZEN prizes including books and gift cards!
a Rafflecopter giveaway

4 thoughts on “Lots and Lots of Manlove–BRIT BOYS: ON BOYS–A Review and Giveaway!”