Hi there! Today I’m sharing in the release party for INCANDESCENT, first book in a new supernatural series from M. V. Freeman. In this textured world, supernaturals battle for dominance all under the human radar. 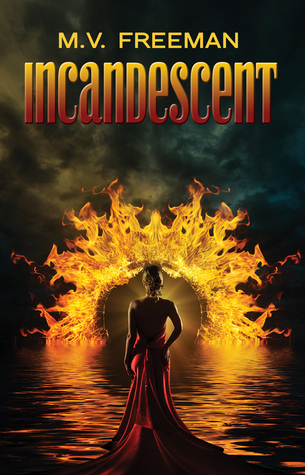 About the book:
When fire meets a force of nature an Incandescent is born.

Laurie Hudson gave up “normal” a long time ago. Isolated from friends and family, she becomes a bartender for an upscale restaurant while she fights to suppress her strange affinity for fire. Around new owner Mikhail Petrov, her careful control disintegrates. She is at once drawn to his urbane, cool demeanor and irritated by his overbearing manner. Now she finds all of her hard won choices being taken away as she is catapulted into a world of Mages, Darks, and mysterious Elementals, all working just below the surface of humanity. As she learns to survive, Laurie realizes her freedom could mean the destruction of the frustrating man she’s come to care for.

A formidable figure in this strange world, Tri-Elemental Mikhail Petrov commands earth, air, and water. He doesn’t give a damn what the untrained Fire Elemental Laurie wants. Her rare power is the key to his freedom, and he doesn’t hesitate to seize her for his use—an act that propels him into a war he isn’t ready to fight. The cost could mean his life and the destruction of his people. With the Mages closing in, Mikhail faces a choice: destroy the fledgling relationship with Laurie to gain his coveted freedom, or sacrifice himself for hers.

Laurie lives a nondescript life, working as a bartender in a restaurant and lamenting the miserable state of her family-life. Turns out her parents will not speak with her, or permit her any contact with her younger siblings. She tries to fill this void with two girlfriends, but has a terrible secret to hide from them–and everyone:  when Laurie loses her temper stuff catches fire. Numerous pyrotechnic events have led to her estrangement, but Laurie’s been spark-free going on three years. Well, at least until meeting Mikhail Petrov. Just being in proximity to Mikhail is enough for Laurie’s body to light up–and not in the good way.

Mikhail is a Tri-Elemental, he can control air, earth and water, but he needs a fire Elemental in order to achieve Balance. His most recent partner, Corrine, is nearing the end of her usefulness. He’s also a local magistrate, of sorts, controlling/monitoring the movements and activities of Elementals, Mages and Darks (vampire-like magic-bearing creatures) within his tri-state territory. Misha, as Mikhail’s close friends call him, had survived years of servitude to Mages before ascending to his current power rank. As an young Elemental, he’d been easy prey for powerful Mages in the past, but his wealth of experience, his own power and coupling with Laurie’s Incandescent strength will enable Misha to establish a new elemental world order, one which will banish enslavement of Elementals and Darks to Mages.

Pulling Laurie’s power, however, has unforeseen effects. Instead of simply enhancing the magical strength of Misha’s borders, he ends up in a land-grab with all new Mages on his tail. It’s okay–for now. Misha’s alwasy had his eye on bigger and better things, after all.

Laurie is not happy. She’s hunted by Mages all looking to enslave her and steal her power. Staying with Misha is the best of a bad situation, and she wants out. Of course, every time she leaves, or tries to leave, another supernatural problem befalls her.

She does manage to make a very powerful friend in her own right–Mina, a Dark who travels through shadow-portals–is daughter the the Dark leader and niece to the Mage Executive. By means of a blood tie, Mina assures Laurie life–because killing Laurie would also kill Mina, and her family is fiercely protective.

This comes in super handy when Misha gets double-crossed and the Mages finally kidnap Laurie. It’s a showdown of the Big Bads and there’s an ocean of supernatural blood spilled. Mina had hope to prevent the brewing war, but Laurie’s Incandescent luck might have just created a firestorm–one which could take down herself, Mina and Misha in one fell swoop.

This is an interesting twist on the paranormal genre. I liked the idea of a partnership, and empathized (to an extent) with Laurie’s desire to return to normal. It becomes so clear, so quickly, how unlikely it is for this to happen, unfortunately. Instead of wasting time being obtuse, Laurie could have been better embracingher predicament and figuring out how to best save her skin while under Misha’s protection. I liked how she was clueless, at first, and honed her skills under Misha’s critical eye. This could have become the stereotypical romance–where the attraction is instant and the progression to coupledom is rapid. Not the case, here. Sure, there’s some attraction, but it is far outweighed by Laurie’s wariness. She and Misha spend weeks-to-months in training together before there is any physicality.

The large cast and interesting creature types marked this world as different from other paranormal/supernatural books I’ve read, and the plot moved along nicely. By the end I could really sense the anguish of Misha, Laurie and Mina, as those they love are sacrificed in the name of power. It’s a cool read, and I look forward to the next installment.

Interested? You can find INCANDESCENT on Goodreads and Amazon.

Join author MV Freeman on twitter this evening at the #LightItUp party from 5-9 EST. Books and other prizes to be given out!

One random commenter will win an e-book copy of INCANDESCENT.

Post your comments by Dec 22nd for your chance to win.

About the Author:
M.V. Freeman lives in North Alabama. A nurse by day, at night she enjoys creating and exploring alternate worlds within our own. She gravitates toward stories of determined heroines and anti-heroes who push the boundaries as they both fight to find their light in the dark.

M.V. is represented by Victoria Lea from The Aponte Literary Agency. Her award-winning and best-selling debut novel INCANDESCENT is the first in the Hidden Races Series. Currently she is working on the third book in the series, while plotting others. When not writing, she can be found reading, cooking, throwing around kettle bells, or making coffee. You can find out more about her here at: www.mvfreeman.com

4 thoughts on “She Is INCANDESCENT–Release and Review and Giveaway!”