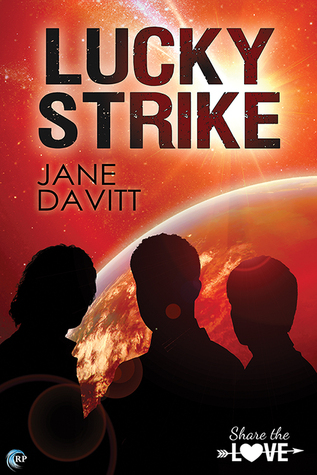 Death’s a heartbeat away, but love is even closer.

Flying a traveler to Leap celebrations on the luxury planet Crestal is no problem for intrepid partners Jake and Rill, even if they have to navigate a deadly meteor shower to get there. But their fresh-faced, privileged passenger is carrying more than Leap gifts: Lian has a message to deliver, treachery and murder to avenge, and a killer close on his heels.

Lian thought he was ready for independence from his overbearing extended family, but his first solo trip off-planet has landed him in a nightmare of deadly intrigue. Though he’s devastated by betrayal, and no longer able to tell friend from foe, he’s fascinated by the gruff pilot and scorchingly handsome first mate who’ve become his reluctant rescuers.

With a dazzling fortune at stake and the fate of the United Protectorate of Planets in their hands, there’s no time for the three men to fall in love. But with their future measured in hours, crew and passenger may have just enough time to discover that three can become one, and that together they are strong enough to beat any odds.

This sci-fi menage M/M/M adventure/thriller follows the uber-wealthy Lian Paradine on his flight to warn his family on Crestal that his cousin Palan is a murderer. Problem is, Lian his no ship and he’s desperate to return to his home world before Palan can silence him, just as he’d killed his own brother.

Jake Slade is an impetuous transport captain. He ferries cargo and people all over the galaxy aboard the Mama Rose and only cares to keep his lover and shipmate, Rill, happy. Rill is a Nova, a genetically-bred humanoid who (as most Nova have) has been a sex worker. He’s beautiful, captivating, even, and Jake has had his hands full keeping Rill from the unwelcome advances of men and women, alike.

They are a solid couple, who don’t mind extra bedmates from time-to-time. Lian is so youthful and innocent, Rill is attracted to him and convinces Jake to take him on as a passenger.

The big problem? Traveling to Crestal in the short time window before Palan arrives will put the Mama Rose into the heart of a meteor shower. Lian has the skill to navigate through the meteor shower, but he lacks the finesse to be a skillful third in Jake and Rill’s bed…at first.

This was an interesting sci-fi thriller. I really didn’t see all the twists coming. Palan, naturally, follows the Mama Rose and the showdown is more touch-than-go. Just when we think Lian, Jake and Rill will make it to Crestal unharmed, well, the whole scheme gets blown sky-high.

And Lian’s family isn’t so sure Palan did anything wrong. Nope, it looks quite a lot like LIAN has some serious ‘splainin’ to do.

Good chemistry, good heat, and interesting characters really brought this one to life, for me. I enjoyed the sci-fi elements, and how each character brought more than his own desires to the table. Each man felt incredibly different, and increasingly likable.

Interested? You can find LUCKY STRIKE on Goodreads, Amazon, Barnes & Noble and Riptide Publishing. I received a copy of this book via NetGalley. This is my honest review.

When I was eight I decided to write a book. I found a blank notebook, wrote ‘Chapter One’ at the start, scribbled a few hundred words about triplets with improbable names, and lost interest. Three decades later I still wanted to write a book, but the dim realization was dawning that meant I had to actually, well, write something.

Yes, it surprised me too.

So I did. Not about triplets, but love, angst, hot and spicy smut, and for the most part they’re m/m romances. There’s a shelf in my library where I keep the books with my name on them and yeah, there they are. I did it.

That eight-year-old me expected a lot of her future self though. Like being an astronaut. Did not do that.

Sorry, younger me. Here, have a wine gum.