This month I’m sharing a YA/New Adult fantasy. THE FIFTH VERTEX is the first in a planned series by Kevin Hoffman, and I really did enjoy it. 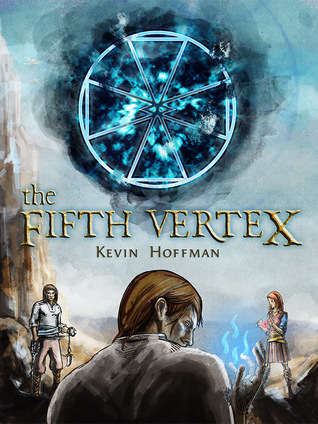 Urus Noellor–a boy born deaf who is about to be publicly branded as a burden, incapable of being the warrior his people demand–stands upon a rooftop, poised to throw himself over the edge. His failed attempt at suicide unlocks within him a long-dormant form of magic thought to have died out thousands of years before, a power that may be the key to saving the world from an equally ancient enemy.

Urus and his companions–Goodwyn, the greatest warrior in Kest, and Cailix, a mysterious orphan–must find a way to stop a powerful group of sorcerers from destroying the five long-hidden vertices that ward the world against threats from beyond, while fighting off threats from within. They soon learn that the scope of the coming danger may be more dire than any of them could have imagined. As the battle for the vertices spreads to the neighboring realms, Goodwyn must face the realities of war and death; Cailix discovers a devastating truth that could change everything; and Urus discovers his uncanny gifts and courage as he peels away clues to his true identity. But even as Urus gains the power he has always craved, he experiences it all in profound, lonely silence.

Urus tells the majority of this epic tale of magical forces set on tearing apart the world. He is a young adult, on the verge of being outcast from his clan–for lack of being a better warrior on account of his deafness. He discovers a magic within himself when he attempts to commit suicide. He is a sigilord, though he doesn’t yet know what this means, or the power he holds.

Cailix is an orphan in the care of monks, when three blood mages arrive and slaughter the monks to obtain the vertex map they guard and gain the power of their blood. She attaches to the head blood mage, Anderis, and begins to learn this killing art–always in the effort to gain enough power to escape her new mentor.

Goodwyn, Urus’s BFF is a gifter warrior, with the ability to “see” the near future in his mind. He also has a dark secret that would alter his status if it were revealed.

As it turns out, Anderis is tasked with destroying the five dimensional vertices on this world. In doing so he will release his fellow entrapped blood mages and they will then be able to traverse not only this world, but all other worlds.

There is an exiled arbiter, Murin, who becomes a guide for Urus, helping him to gain the knowledge of his power and also find the lost vertices and protect them from destruction. Unfortunately the blood mages gain power with every kill, and even the combined strength of Urus, Goodwyn and Cailix may not be enough to prevent annihilation when the vertices get crushed.

This was an interesting hero’s saga. Urus and Goodwyn are good characters, both having deeper layers. Urus was routinely beaten as a child, whereas Goodwyn loves one he cannot claim. These internal issues definitely affect the choices they make. Cailix learns the truth of her parentage, and it only makes her more determined to use her blood sorcery for good. Plus, it seems she has an affinity for Urus.

War is being batted throughout this world, but there comes a time when fences get mended and enemies unite to assault the larger evil, and it is handled in a way that is respectful and honest. Lots of gore–due to the wars incited by the blood mages, and also by the mages harvesting blood for their own power–which directly affects Urus; his sigilord blood power is enormous compared with that of normal people, or even blood mages.

What I loved about this book was the variety of form. Urus and Goodwyn are from Kest–and they are black with yellowish eyes. Murin, Urus’s arbiter guide is a grey man. Cailix is a pale girl with red hair, some of the others in the book range from dwarfish to giant. The people of this world are all different, unique to their locale. Urus’s main skill is his abiility to communicate with them, even if he cannot hear and has limited speech–so this was a decent trick, though there were times I wondered if he could possibly read all those lips! His developing sigilord skill was interesting to witness–it comes on slow and builds with time and trial.

The world is set in less modern times, with hand-to-hand combat being the order of war. Groups that had been allied with the blood mages gained technology far superior to the norm, and for this they paid dearly, but it brought a steampunk element into the plot, allowing for the Old World v. Technology theme to be explored.

The end comes a little quickly, I thought, but I was glad that it ended in such a way that the resolution is solid, and without a cliffhanger. Yes, there is a tie that will bind on to book two, but it is not the outcome of the battles.

At times I worried about so many points of view–but they were all well defined. Urus tells the bulk of the story (well his POV does) and Cailix and Goodwyn share other parts for when they are separated and how the battles progress via their eyes. These really move the plot forward, and there is little overlap or recap upon reunion.

I think lovers of epic fantasy will find this book to be interesting and engaging. I look forward to the sequel.

Interested? You can find THE FIFTH VERTEX on Goodreads, and Amazon. I received a copy of this book via NetGalley in exchange for an honest review.

Thanks for popping in for this month’s Coffeehouse. Don’t forget to check out the great books my fellow bloggers loved. And, keep reading my friends!