Hi there! Today is Veteran’s Day in the US. I’m actually a pacifist–which is pretty cool! While it means that I do not support war, violence or brutality, it DOES NOT mean that I do not support soldiers. I do. These people put their lives on the line in ways I can’t imagine, and don’t wish to. What I hate, and I’m gonna use that word, is the (unnecessary) use of soldiers to “protect people” (read: corporate interests) in places we should not be.

See, I am not an Imperialist. I’m not an elitist. I do not think that America is THE VERY BESTEST PLACE. It is a good land, with some problems. It is a good place, that could use some improving. It is better than lots of places, and I am glad to be here, but I’m sure I could find a good life in other countries just as well. In terms of war, I think that many world leaders have forgotten the human cost of it, and that saddens me greatly.

My father, rest his soul, served in Vietnam. He enlisted, actually. Believed he would be helping out the poor Vietnamese find democracy and a better way of life. What he found was an autonomous nation of people who wanted to be left alone. As an 18 y/o kid, my dad saw a lot of combat. He was given a Bronze Star and an Airborne patch, for dropping into over 30 LZs (live zones) as an infantryman.

In honor of Veteran’s Day I hope I can urge anyone reading this to ONE: consider peace. Consider it with your life’s breath. Imagine it was your son, daughter, father, mother, brother, sister being recruited to take on a “war” and how that person may not return home to your loving embrace.

TWO: Please, don’t forget our active military and veterans. They need support. The rates of veteran suicide are so high–22 people a day! If you know a vet, or an enlisted soldier, who is suffering please reach out. Try to get that person to reach out, too. The Veteran’s Crisis Line can help.

Okay, so, back to the Reading portion of this blog… My son recommended this book, SIDEKICKS, because it struck a nerve with him. And, I’m so glad I read it. Honestly. This book got my son thinking about all the falsehoods out in the real world. The images we are sold to gain support for shadowy ideals. This is why I wanted to share it on Veteran’s Day.

SIDEKICKS is a YA romance/adventure about Scott Hutchinson, a super strong/super fast teen boy whose alter ego is Bright Boy. He is sidekick to the world’s greatest superhero–Phantom Justice. And, man is his world crumbling beneath his feet! Like many combat veterans, Scott’s a hero, who doesn’t show it. 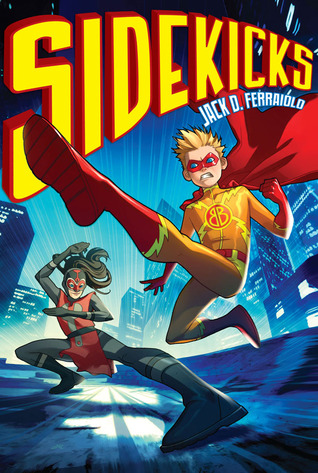 About the book:
Batman has Robin, Wonder Woman has Wonder Girl, and Phantom Justice has Bright Boy, a.k.a. Scott Hutchinson, an ordinary schoolkid by day and a superfast, superstrong sidekick by night, fighting loyally next to his hero.

But after an embarrassing incident involving his too-tight spandex costume, plus some signs that Phantom Justice may not be the good guy he pretends to be, Scott begins to question his role. With the help of a fellow sidekick, once his nemesis, Scott must decide if growing up means being loyal or stepping boldly to the center of things.

Scott/Bright Boy has reached the Age of Awareness. Though he’s been a sidekick for seven years, he’s just now into puberty. And, well, his uniform tights…they are TIGHT! One night, his rescue of a pretty woman leads to (gasp!) an erection–one that is captured on live TV and broadcast all over the news networks.

Remember, how boners in class are a big problem for normal boys? Well, poor Scott has to suffer in silence as all his classmates snicker about the Big Deal and the newscasters cracking tasteless jokes about his “rising” to the occasion. Even Trent (Phantom Menace) is giving him a side-eye, thinking he’s a perv and telling him he better settle all that down right quick. Scott’s rage and embarrassment  knows no bounds, and when he’s taunted by Monkeywrench at a meet-up, well, Bright Boy loses his ever-lovin’ cool. He attacks, and the results? Romantic.

Okay, not at first, but Monkeywrench, sidekick to Dr. Chaotic (Phantom Justice’s nemesis), is more than meets the eye. She, well, is gorgeous, and intelligent, and interacting with her teaches Scott that “good” is a label that is truly subjective. Especially when Bright Boy gets a handle on what EXACTLY Phantom Justice stands for.

I’m not going to ruin this one–at all–because, it is a fantastic book. It takes all the superhero tropes and twists them. I loved Scott’s complete naivete. And Monkeywrench, aka Allison, is frankly a great accessory character. There is a love story here, and it’s not forced. Scott has never really connected with his peers, and Allison is the first person he can be honest with regarding his life, and his dreams. And, she’s tender to him in a way he absolutely needs. Plus, Scott/Bright Boy is just such a great kid. He is so pure of purpose, so incredibly self-less, and yet a bit sulky regarding his own personal life, teen readers will find him easy to connect with.

Interested? You can find SIDEKICKS on Goodreads, Amazon, Barnes & Noble, and libraries everywhere.

Jack D. Ferraiolo is the author of The Big Splash (a 2009 Edgar Award nominee), the forthcoming sequel, The Quick Fix (Spring 2012) and Sidekicks (2010), which received starred reviews from Publishers Weekly, Kirkus, and School Library Journal. He also works in animation, winning an Emmy Award for Outstanding Writing in Animation as the head writer for PBS’s WordGirl (a series he co-created).  He was an editor and producer for Home Movies (on Adult Swim) and a writer, director, editor, and producer for O’Grady (on The N).  Recently, he created Chuck Vanderchuck’s “Something Something” Explosion for PBSKidsGo.org, a broadband-based show about an 8-year-old David Lee Roth-type kid who’s sole purpose in life is to teach the world the awesomeness of music.

You can catch up with Jack on his website, or email.