Hi all! Today I’m sharing a contemporary re-telling of Shakespeare’s MUCH ADO ABOUT NOTHING. RUINED by Marian Cheatham is a fast-paced YA romance which is more about break-ups than make-ups, but it’s an HEA. Quick disclosure, Marian’s a friend. I’ve known her for years via SCBWI and just love her work. You can find my review of EASTLAND, Marian’s historical romance, here. 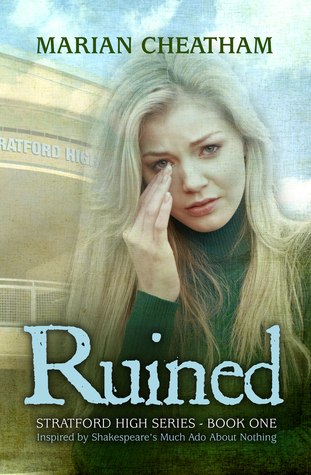 When your life has been ruined by lies, do you seek justice or revenge?

Blythe Messina spends her senior year focused on her studies and college, and not on her ex, Stratford High’s lacrosse star, DB Whitmore. At least, that’s what Blythe keeps telling herself. But her younger cousin, Bonni, knows otherwise. Same goes for DB, who professes to be over Blythe and their breakup, but his teammates, Paolo and Cory, don’t believe him. At the awards banquet for the team, Bonni and Cory meet and fall instantly in love. The happy new couple annoys Paolo’s younger half-brother, Jon, who devises a diabolical plan to break up Bonni and Cory, and bring down his popular brother, Paolo.

Jon’s evil plot goes off without a hitch, or so he thinks. His scandalous photos of Bonni and Paolo are texted around Stratford, and Bonni’s virtuous reputation is ruined. Hurt and humiliated, Cory dumps Bonni. Paolo and Bonni deny any involvement with each other, but no one believes them. No one, except Blythe and DB, who come together to uncover the truth. But, is their new alliance enough to keep them together?

My Review:
Blythe and Bonni Messina are two cousins with different opinions about boys. Blythe wants to stay away from her once-BF lacrosse wingman DB. DB thought he and Blythe were on the right track, but she jumped cars a year ago and stayed away from him, and all other boys, for all that time.

Meanwhile, Bonni longs for a deep emotional (innocent) connection to a boy–and thinks she’s found her match in Cory.

Unfortunately, some serious mischief is underway. Bonni plots with DB’s buddy Paolo to reconnect DB and Blythe. And Paolo’s half-brother, Jon, wants to embarrass Paolo in order to gain their father’s favor.  The best way Jon can make this happen is to create a scandal surrounding Bonni, the leader of the Pro-Abstinence Club at school, and Paolo–a known player. This will humiliate Paolo and alienate him from his best friend, Cory.

Jon orchestrates not one, but two assaults on the Bonni-Cory pairing. First is a simple rumor, the second is much more malevolent (and results in some criminal charges!) The long and the short of the scheme sends Bonni running from school, sans Cory, who is sure she has been intimate with Paolo. Paolo is mortified, and mystified, how and when he could have been linked to Bonni, but DB trusts that his pal didn’t take advantage of her.

DB enlists Blythe’s help to discover the root source of Bonni’s humiliation, resorting to their own rumors to flush out the perpetrator. This also puts DB and Blythe in close proximity–fostering the reconnection their friends and family had envisioned.

As in Shakespearean comedy, it’s All’s Well That Ends Well, but the ride to the finish is breakneck. The good guys prevail and the bad guys are captured, and we can all learn a good lesson about those we trust, and why. In this case it wasn’t blood that was thicker than water, and DB’s level head was instrumental in clearing Paolo and Bonni of committing any shenanigans.

The plain and frank talk is sure to appeal to readers of YA fiction, and the touch of romance was innocent through and through, so it’s cool for younger teens.

Interested? You can find RUINED on Goodreads, Amazon and Barnes & Noble.

About the author:
Marian Cheatham lives in a suburb of Chicago with her family and their menagerie of pets. A graduate of Northern Illinois University, Marian taught Special Education for many years before becoming a full-time writer.