Hi there! Today I’m sharing a recently released contemporary romance by Katie O’Sullivan. I “met” Katie a while back via some blog hops I join and I was interested in her adult work–she’s multi-published in paranormal YA romance for some cool mermaid books, but MY KIND OF CRAZY is a straight romance featuring two divorcee’s who find a fresh start in Cape Cod. 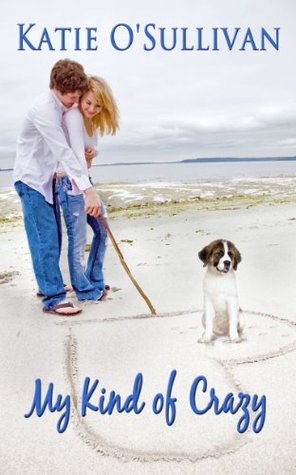 Kendall Roarke is betting everything on making her Harwichport Bed & Breakfast into the premier wedding destination on Cape Cod, despite her recent messy divorce.

Jonathan Reynolds moved back to the Cape to take over his uncle’s business and start fresh after his own marriage ended. He’s not looking for anything complicated – until he meets Kendall, with her big plans and wild mop of curls.

Throw an unruly foster puppy and an uptight new neighbor into the mix and things get a little crazy. Now Kendall has to decide if it’s the kind of crazy that she can live with… for the rest of her life.

My Review:
First, let me say I liked the story. It’s a well developed plot with two kind-hearted main characters. Kendall “meets” Jon obliquely in her local coffee shop. At the time, the shop gossip is speculating that Jon is a bit too friendly with the matronly librarian (his aunt, though Kendall doesn’t know this) with whom he is having coffee. Kendall is overly sensitive to infidelity–her own husband took off with a barely-legal waitress several months back and the divorce papers are freshly minted. So, she chucks Jon into the Cad Category, and moves on. Sort of.

Jon is a veterinarian who has newly relocated to Cape Cod to escape his own failed marriage–his wife had been having an affair with his business partner, so he cut his ties and moved east to take over his elderly uncle’s practice. He used to spend summers on the cape, having both his mother’s siblings as long time residents. He’s attracted to Kendall, but afraid to act on it–especially in the company of his family.

Once Kendall gets over her misunderstanding regarding Jon and his aunt, they become friendly. Jon admires Kendall’s independence and hard work–she’s single-handedly restoring her now-empty beach house and turning it into a bed and breakfast/wedding destination. She’s also fostering a St. Bernard puppy who is absolutely smitten with Jon.

While Kendall and Jon take faltering steps closer, Kendall’s fledgling business comes under attack from her new neighbor and her conniving ex-husband. It seems she’s going to have some legal battles, and just when this comes to the boiling point, Kendall is implicated in the arson investigation of her prickly neighbor’s property.

We end up with a well-formed, interesting plot that has a bit of heat, but no sloppy details. Jon and Kendall form a bond that is kinda too quick, in truth. I’m getting to the point where I’d rather see characters admit they “admire” one another, as opposed to “love”–because I think this is probably both more accurate and more believable. Still, I breezed through this beachy read, happy to see the good guys prevail, and the bad guys hide from the light of their machinations.

Interested? You can find MY KIND OF CRAZY on Goodreads, Amazon and Barnes & Noble. 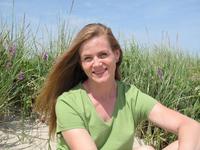 Katie O’Sullivan lives with her family and big dogs next to the ocean on Cape Cod, drinking way too much coffee and inventing new excuses not to dust.

She writes YA and romantic suspense novels, as well as working as an editor and magazine columnist.

Her debut YA novel, SON OF A MERMAID, made a big splash in the summer of 2013. The next book in the series will be released in May 2014. She hopes BLOOD OF A MERMAID will engage young readers with a Cape Cod tale of a boy who discovers both his roots and his destiny far below the waters of Nantucket Sound.

Her new contemporary romance, MY KIND OF CRAZY, is available now on Kindle from The Wild Rose Press.

One thought on “I Found MY KIND OF CRAZY–A Review”