What if following your heart could cause your death?

Today’s book is one I’ve been waiting to share until it was released. It’s an historical M/M romance and I adored it. Allow me to tell you more about THE DUKE IN DENIAL by Alexandra Ainsworth. 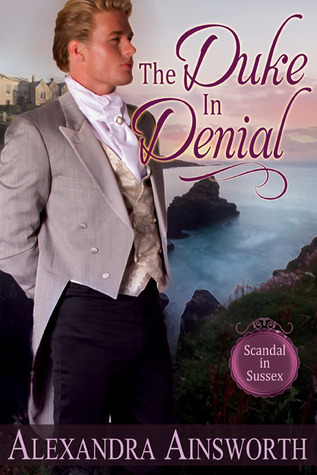 Sebastian Lewis never expected to become a duke. But with the sudden deaths of his cousin and uncle, Sebastian’s position changes. He is determined to fulfill his new responsibilities with grace, even if it means remarrying, and even if the attractions of women, so often lauded by poets, fail to interest him.

Captain William Carlisle, newly returned from India, is elated when he meets Sebastian. Nobody knows of his inclinations, but his harrowing experiences in battle have prompted him to reach for the type of companionship he longs for. He thinks Sebastian might feel an attraction as well, but to his dismay, he discovers that Sebastian is courting his sister Dorothea.

After a semi-arranged engagement and a disconcerting romantic tangle with William, Sebastian escapes London to look after his manor, only to face mysterious thefts, a headless ghost, and the arrival of his fiancé, her brother, and his family. Sebastian’s new estate sits on the south coast, England’s most vulnerable location, and Napoleon has set his sights on conquering the area. Amid this growing turmoil, Sebastian must sort out his feelings for his fiancée’s brother and keep his home safe . . . and determine if he has the courage to reach for his own happiness in the process.

My Review:
Sebastian is a newly entailed Duke following the untimely deaths of his uncle and cousin. From his remote northern estate, he’s thrust upon the London scene as one of the biggest “catches” of the season. A widower who recently lost his young son, Sebastian hopes to marry quickly and get settled in his new duties; his focus has always been outward, caring for his estates and the people who work them. Not a romantic, he expects to have cordial relations with his wife-to-be, Dorothea, his dead cousin’s fiancé. She’s a beautiful woman, yet Sebastian isn’t attracted, much. He’s really not sure why–or why all the men around him act like such lecherous fools…

Then he meets William and Sebastian’s unhappy to sense an attraction to another man. William is an army Captain, newly returned from duty in India where he was injured. He’s recuperating and spending time with his younger sister, Dorothea, who it seems will soon wed a Duke.

Sebastian and William had shared some lovely moments before learning that they were to be joined as brothers-in-law. William, who understands his sexuality, is attracted to Sebastian and playful in his banter without being overt. Sebastian just senses an instant connection to William–he’s much more down-to-earth than the London aristocracy-but knows his attraction is unnatural, unacceptable and illegal in these Victorian times. The more William approaches, he harder it is for Sebastian to step away, however. Dorothea knows her brother well, and suspects there is more than filial interest behind William’s attentiveness to her fiancé.

Still, the seal is broken. The attraction simmers so much that William is almost compelled to break off his sister’s engagement–ruining her chances for another match.

Sebastian is determined to deny this passion he feels for William, and to marry Dorothea, but in the mix we get a whole lotta drama. Sebastian’s new estate has become the scene of some untoward rumors. The few staff not scared off the ghost are afraid of Napoleon’s army invading. And his new neighbor, Sir Ambrose, seems determined to steal Dorothea away.

It’s a lovely trip into the past, with the added bonus of a steamy romance. Sebastian is so determined to do right by everyone but himself–and William is unwilling to let go a man with whom he can share himself completely. Supporting characters help to round out the story in ways that were fun and surprising. I adored Sebastian’s cousin Penelope, and her mother–both of whom were outspoken women. Dorothea’s almost mercenary desire to marry Sebastian was at reasonable–considering Sir Ambrose’s unwelcome advances.

The resolution of the ‘ghost’ had just enough breadcrumbs such that I could predict the culprit and still enjoy the revelation. And action picks up steadily, a whole espionage subplot takes over the climax leaving Sebastian being thoroughly bereft of love, for a time. It may sound like there’s broken hearts, but the end is a superlative HEA. In the upper crust of Regency London, it is the appearance of propriety that is important, and William and Sebastian are able to make a life that works for them without upsetting the social applecart. Dorothea’s reputation was also spared.

The steamy scenes were so well done, sexy not sloppy, and I’m always enchanted by ‘first times’. Sebastian’s complete naïveté of all things homosexual was nearly comical–getting picked up by a man and having a drink in a mollyhouse was a real blunder. One he was grateful that William saved him from. I enjoyed the slow burn of the romance. The characters were equally introspective, and cautious, about moving forward into relations fostering an exquisite sexual tension. The dialogue and language was appropriate for the period, which I treasured.

Interested? You can find THE DUKE IN DENIAL on Goodreads, and Amazon. I received a copy of this book via NetGalley for advanced review.

The Duke in Denial is her debut novel. You can find her on her website, Facebook and twitter.Alexandra Ainsworth lives on the south coast of England. An ardent Anglophile, Alexandra left her home in New England several years ago to move to the real England, spurred on by promises of good tea and green countryside. She still gets a thrill from living in the same country as all her favorite regency romance characters.

Thanks for popping in! And, keep reading my friends! 🙂