Hi there! Today I’m featuring a contemporary romance that combines romance, family, and cooking–all set in Chicago, my hometown. Kate Meader’s HOT AND BOTHERED, the third book in her Hot in the Kitchen series, is D-Lish. 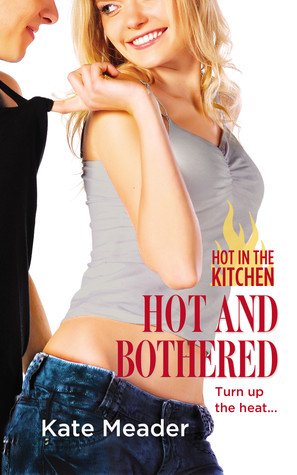 Although her baby boy keeps her plate full, Jules Kilroy is ready to take her love life off the back burner. Despite a bevy of eligible bachelors, it’s her best friend, Taddeo DeLuca, who’s fueling her hormones with generous servings of his mouth-watering Italian sexiness. But Jules learned her lesson once before when she went in for a kiss, only to have Tad reject her. She’s vowed never to blur the lines again . . .

After a lifetime of excuses and false starts, Tad has finally opened a wine bar, a deal made even sweeter when Jules joins his staff. Lovers come and go, and he’s had his share, but friendships like theirs last forever. Still, ever since he tasted her luscious lips, he can’t stop fantasizing about what could be. Then she signs up for an online dating site—and the thought of his Jules with another man makes Tad’s blood boil. Even if he gets burned, Tad can’t stop himself from turning up the heat this time.

My Review:
Two years ago Juliet ‘Jules’ Kilroy left England bound for Chicago. She was young, upset, and pregnant. Her brother Jack, renown chef and restauranteur, took her in not only to his home but to his new extended family–his wife Lili hails from a close-knit Italian family. Among them, Tad DeLuca, Lili’s cousin and a single man with tragic secrets.

Being the odd people out, Jules and Tad strike up a friendship. He’s the rock she can lean on when Jack’s busy working. Tad even takes birthing classes with Jules and attends the delivery of little Evan. Jules knows Tad’s no good for her–he’s rarely with the same woman twice–but she’s been celibate since conception and lays a sloppy kiss on Tad one night, one he quickly rebuffs.

See, Tad knows he can’t lose his heart to Jules–he doesn’t have one to give. Not since his parents died in a car wreck ten years ago that was his fault. They remain friends, nonetheless. Fast-forward a year and Jules is helping out cooking at Tad’s new wine bar. She’s also ready to get “out there”. A dating Jules is one facet of her Tad has no will to witness, however. His attraction to her begins to get the better of him–he even offers his “services” when he learns she’s looking for a fling…

And, she turns him down. Their lives a so intertwined; his aunts babysit little Evan and his cousins are her closest gal pals–she doesn’t want to tip the boat.

Still, they manage to seal the deal, leaving only awkwardness and hunger in its prime form. Tad even disrupts some of Jules’ dates, that rascal.

In the end there’s a lot of break-up-to-make-up. Evan’s father learns of his existence and wants to meet his son–something Jules and Jack want to prevent. Yet, Tad’s the voice of reason, even if it clashes with Jules’ gut instinct. And, when the anniversary of Tad’s parents’ death rolls around, Jules is there to love him out of his drunken stupor.

I liked this one. A solid breeze-read. I generally like a little more conflict, the biggest obstacle to Jules and Tad getting together is their insecurity, but the friends-to-lovers trope was well-handled here. Jules is fun gal to get into. Tad is really a great guy–and head over heels for both Jules and Evan, but at times his “voice” rang more Brit than Chicago-Italian. (I’m probably most sensitive being that I am from Chicago, and of Italian descent.) I enjoyed how cooking was such a big part of the book–family meals are the lifeblood of Italians–and how it eventually brought Jules and Tad together.

Interested? You can find HOT AND BOTHERED at Goodreads, Amazon, and Barnes & Noble.

Kate writes sexy contemporary romance that serves up to-die-for heroes and heroines with a dash of sass. Originally from Ireland, she cut her romance reader teeth on Catherine Cookson and Jilly Cooper novels, with some Mills & Boons thrown in for variety. Give her tales about brooding mill owners, oversexed equestrians, and men who can rock an apron, and she’s there. She has a bachelor’s in law (useless), a master’s in history (not as useless), and another master’s in library and information science (yay, using). When not writing about sexy men and the women who can match them quip for quip, she works in an academic library in Chicago.

You can find Kate at all these fancy locations…

Thanks for stopping by, and keep reading my friends! 🙂