I won an ARC of Kat Latham‘s second book in her London Legends contemporary romance series–and I’m so glad I did!

And, PLAYING IT CLOSE tickled my romance-fancy, and my variety-fancy. It’s all about the English, baby.

In fact, I nearly dropped over when I opened the book and found the handy-dandy Guide To Briti-cism’s. How else would I have learned that “pants” means underwear across the pond. Or, that a proper Brit might watch sport (plural) and hate maths (singular)? My inner Anglophile shouted BRILLIANT! and I dove into the heady domain that is rugby (union, not league you twit!). 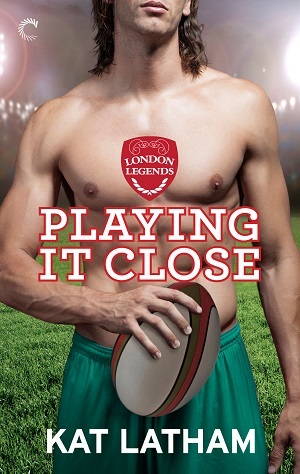 Where do you go to escape everything when you’re one of the most famous rugby players in the world? For Liam Callaghan, that place is a remote lodge on Venezuela’s Caribbean coast. Perfect, except he doesn’t exactly want to be alone with his thoughts. Enter Tess Chambers, the ultimate distraction.

Still reeling from a professional disaster that’s made her all but unemployable, Tess understands the desire to move through life as somebody else. So when instantly recognizable Liam uses a fake name, she runs with it and creates a temporary new identity of her own.

Their time spent together in paradise is idyllic but brief—after one passionate night, Liam wakes up to find Tess gone. Returning to London, he’s shocked to learn she’s taken a job with his team’s new sponsor. As the Legends’ captain, he’ll have to not only figure out how to work with the one woman who ever left him wanting more, but also convince her that their feelings in the present mean more than any lies they’ve told in the past.

Tess Chambers is professionally mortified. She has been unmasked as the whistle-blower on the sexist world of investment banking, and she’s on holiday to escape the headlines and inquiries. Which explains why she’s hiding in a resort in Venezuela–sporting pink hair–when she encounters Liam Callaghan (Stars and garters, that’s a sexy name!) He’s the big, buff captain of her abso-fave London Legends rugby team.

[Side note: Rugby is not my sport. I know virtually NOTHING about it. Yet, I fell right into this book. Yay!]

Liam is spending a week in seclusion ridding his mind and heart of the guilt he’s buried since his mother died, alone. She’d been his biggest supporter but neglected to tell him she was dying of cancer–probably because (like mothers are wont to do) she didn’t want him agonizing over her last days. Still, Liam’s re-evaluating his priorities, and he’s finding his Love-‘Em-And-Leave-‘Em lifestyle is missing a bit of…heart.

Tess and Liam spend two days and one night together. I’m not going to say it’s love at first sight–because it isn’t. They do find respite in each other, however, and that’s pretty valuable. Liam is finally starting to relax, even open up, when Tess disappears.

A few weeks later, Tess’s cousin recruits her to manage the financials and logistics of a new joint venture–Lead Sponsor of the London Legends. Oy vay! Imagine Liam’s surprise when he shows up to the business dinner, a Hollywood starlet on his elbow, to meet the lady he’d missed terribly when he woke in his empty bed.

Tess is, well, personally mortified to find the close quarters she’ll have to spend with Liam. Having had a huge scandal at her last employ, she isn’t willing to indulge herself–or Liam–though the attraction crackles betwixt them. Oh, and did I mention the calendar shoot? Those buff athletic men hanging out in the…buff? *V swoons* *Tess swoons too*

There’s plenty of misdirection and crossed wires to keep the plot hopping. Tess is a fun MC. She’s smart and sassy, and believably vulnerable, too. Liam’s a good guy at heart, one who wants a woman to love him, not his celebrity. He wants to be a hero for his good deeds in the real world, not on the rugby pitch. I had a fantastic time being a vicarious Londoner, and relished the chance to drop into both characters’ brains as the POV alternated. This is the second book in the series, but I could see where Book One and Book Three had come and will go, which was fun.

PLAYING IT CLOSE is a standalone with an HEA that satisfies. It comes out April 16th but you can pre-order it now at a discount on Amazon and Barnes & Noble.

Thanks for dropping by, and keep reading my friends! 🙂

12 thoughts on “Blimey, I Loved PLAYING IT CLOSE! A Review”