I was trolling NetGalley this week–looking for the fun, the new, the different–when I came across this Contemporary YA M/M romance from debut novelist Michael Barakiva. It takes teen angst to a whole new, humorous, educational level… 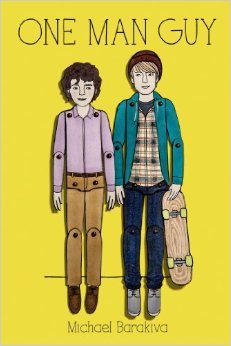 Fourteen year old Armenian-American Aleksander is weeks away from the end of his freshman year. For him, summer is all about tennis camp and a family trip to Niagara Falls and hanging with his BFF, Becky, and he can’t wait.

Oh, the cruel whims of parents!

It seems that Alek is doing okay in his classes, but not nearly good enough to remain in the Honors track–unless he retakes English and Algebra in summer school. So, those plans of summer fun and tennis? POOF!

And Alek is downright salty* over it. (*in this context ‘salty’ means rude and angry, or so my teen son tells me…)

But, honor his parents’ wishes he does, because being Armenian means, well, I guess it means doing more. Alex’s parents definitely lay a guilt trip so thick a water buffalo might drown in it. See, Alek’s family is very tight-knit. He wants to assert his independence, but he’s smothered by his folks, unable to even pick out his own clothing. So he doesn’t stand a chance of avoiding summer school if that’s what his parents demand.

While at summer school Alek meets the notorious skater-boy, rabble-rousing, food-fight-starting Ethan Novick, a junior. Ethan is the embodiment of rebellious teen in Alek’s admiring eyes. He’s not sure why Ethan draws his attention, but Alek cannot seem to get him out of his thoughts. Confessing to Becky, Alek learns she harbors a secret crush for Alek creating a bit of discomfort.

On the way to school one morning, Alek and Ethan meet at the NYC-bound train stop, and Ethan drags Alek off to The City for a daylong hooky adventure, the like of which Alek has dreamed of but never had. He and Ethan bond until Ethan uses the F-word: Faggot. Alek isn’t gay, but he’s thoroughly offended and stands up to Ethan over it–at least until Ethan explains why it’s A-Okay for him to use that particular slur–Ethan’s gay.

Alek is stunned, but still friendly. In fact, to make up for his mistake he creates a gift that wins Ethan completely over, and Alek begins to realize why Ethan is such a big focus in his mind…attraction. But, he struggles with this new wrinkle in his identity. Alek’s had a couple girlfriends before, after all. And he never felt attracted to boys–Ethan excepted. When they actually kiss, Alek is blown away by the rightness of his feelings, the overwhelming rush of desire.

This relationship must stay on the down-low, however, because Alek is certain his Orthodox Armenian parents will never accept a gay child. Good thing their vacation is looming. Family friends convince Alek’s parents to leave him unattended while they travel–a point Alek had argued for–and now he has an empty home and a curious boyfriend. They skip school again for another NYC visit and Alek indulges in his freedom, getting a new haircut and updating his wardrobe from the geek-chic clothes his mother buys.

Do I need to tell you that Alek’s parents return home at an inopportune time? Yeah. Drama.

But the end is a super HEA that satisfies. I adored this book for its humor, and its cultural grounding. I really learned a lot about Armenian culture (and food!) and history that, lamented often by the Armenian characters, is largely denied and forgotten except by those within the Armenian community. Observing Alek accept his sexuality was refreshing. His wit and observations had me in stitches, even if I’m one of those Americans! Becky and Ethan are solid supporting characters, and Alek’s over-involved parents are real people, not cardboard caricatures. They really shine in their love and sincerity.

Overall, the book is meant for teen readers and I’d highly recommend it. There are brief encounters between Alek and Ethan that amount to some heavy make-outs, but nothing more. Having no knowledge of Armenian culture and life, I was pleased to recognize some similarities to the Jewish experiences with which I am familiar. I think any reader could relate to Alek’s family and their quirks. Well, unless you are Turkish. There seems to be a decidedly anti-Turk sentiment within the Armenian community represented here–and its historical significance is fully described within the book.

The author, Michael Barakiva, has really injected a lot of history into the novel without making it preachy. In fact, his deft hand actually calls into question the validity of holding onto past prejudice as opposed to pursuing future happiness. As a result, uneasy truces are made that support moving forward with love and acceptance, even when a Turk is involved.

Interested? ONE MAN GUY will be out this May. You can find more info at Goodreads, and pre-order it via Amazon and Barnes & Noble. It’s a fantastic read! I received an advanced review copy of this book via NetGalley.