Hi there! As many of my readers have learned, I read a wide range. Part of that is being a mom. I’m sharing a beloved book with my 4 year old right now…SOCKS by Beverly Cleary. Oh! Takes me back. But my 11 y/o is really loving a book about an invisible boy that I may check out…and my high schooler, well, HUCK FINN is a classic.

Still, my personal reading tastes favor more paranormal, YA, Urban Fantasy, and romance of all stripes. That’s what turned me on to M/M romance–the menage books that featured close M/M relationships. I’ve followed the trend of mainstream authors picking up on the interest as well. In my search for great reads, I came across a newly released title, LEGALLY WED by Rick R. Reed, that really investigates the heart of gay marriage, from an insider’s perspective. 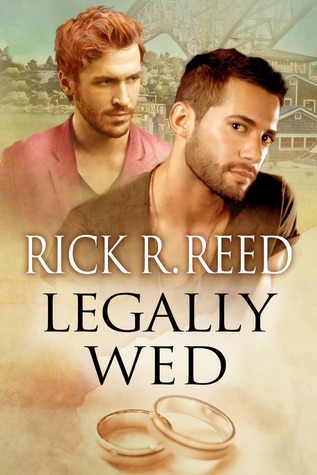 LEGALLY WED is a contemporary romance with a M/M story, but the kicker is:  the gay man is marrying a woman. And, not on the down-low.

Duncan is overwhelmed with joy that gay marriage is legal in Washington state. Watching the hordes of couples waiting for their unions, he can’t wait to join that happily married crowd. He’s been with Tucker for three years, and decides to pop the question…to be rebuffed. Soundly.

Devastated, Duncan gets drunk and signs on to Craigslist to post a call for a woman who will marry him–knowing he’s gay and not interested in a physical relationship.  See, Duncan wants to grow old with someone. He wants a lifelong companion, and he’s sure that he won’t find it with a man. But, he’s near forty and never been with a woman, and has no desire to change that. He does, however, have healthy relationships with women, and thinks that a platonic relationship may work.

Well, he gets lots of offers, though only one strikes the right note. He meets with Marilyn, a woman who has always had good friendships with gay men, and they hit it off. Not a Let’s Get Hitched-connection, but they can see being friends. Good friends, even, and a couple months later they are planning a wedding–for real. Struggling with the plans necessitates a planner, however.

Enter Peter. Garrulous, charming, gay bear, wedding-planning Peter. He’s so not Duncan’s type, but dayum…they connect. Not physically, mind you–Duncan’s a great guy, not a cheater–but the attraction is mutual.  Even Marilyn can’t deny how they seem to mesh. It unsettles them, actually, but they are determined to press on with the wedding.

Duncan seems consumed with Peter, and likewise. He knows he’s making a mistake marrying Marilyn, but he can’t seem to derail his desire for companionship, and isn’t willing to sacrifice the relationship he has built with Marilyn by calling it off. Until his brother-in-law dies, and Duncan returns home for the funeral. Seeing the love his beloved sister shared turns Duncan’s thoughts around.

Don’t fear for Marilyn. There’s room in this story for two happily ever afters…

I just loved this book. Duncan’s despondency over his failed relationships is palpable. My own heart twisted right along with his, seeing the happiness of everyone else and wondering “why not me?”. The book is mostly in Duncan’s point of view, but we get some chapters from Marilyn and Peter as well. It’s a solid read with Duncan and Marilyn sharing their dry humor throughout. As for the smexytimes, it’s far tamer than a category romance. In fact, I think the dirty fantasies Duncan and Peter have are smuttier than the deed. Still, it’s for a mature reader.

Interested? You can pick up LEGALLY WED at Goodreads, Amazon and Barnes & Noble.

If you have the chance to read this one, let me know your thought in the comments. And, as always, keep reading my friends. 🙂