Hi there! And, welcome to my stop on the blog tour for THE NAKED EDGE sponsored by AToMR Book Tours. For other stops on the tour, click here. Today’s book is a New Adult Romance from Charlie Webb–and man does it have it’s highs, and lows…

The first time Skylar and Rowdy give themselves to each other completely–heart, mind, body and soul–is also the night Skylar disappears without a trace. Rowdy promised to love her forever. But forever is a long time when you’re only seventeen.

After years of waiting, Rowdy gives up on Skylar and tries to purge her from his memory with cheap tequila and one night stands.

When Skylar finally returns, Rowdy is no longer the shy, sweet boy she fell in love with. He’s bitter, angry and determined to protect what remains of his shattered heart. She’s determined to reclaim it, but first she has to put it back together.

Set in the eclectic town of Eldorado Springs, Colorado and Eldorado Canyon State Park, a rock climber’s paradise, “Naked Edge” is a new adult contemporary romance about perseverance, second chances and the healing power of love.

I love Colorado. One of my uncles moved there decades ago, and since then I’ve visited many times. It’s  lush beautiful place (once you get past the Front Range into the mountainous terrain!) I’ve read a few books settled there for that reason alone. In fact the opening scene reminded me of Simone Elkeles’ Chain Reaction–what with the rock climbing and the injury–but that’s where the similarity ended.

Skylar is hoping for a second chance. At sixteen she was whisked away from the love of her life due to unforeseen, uncontrollable events. Her step-father enrolled into the witness protection program and took Skylar and her mother underground with him. But that was four years ago and much has happened. Mom’s dead, and Sky has no allegiance to her philandering step-daddy. She’s going to fight for her love, Rowdy, and win back the life she lost when she disappeared without a trace.

Rowdy had been head over heels for Sky–throughout their childhood they were smitten. She was his first, and he promised to love her, only her, for all time. Then, she was gone.

His own personal tragedies delayed his search, but he soon discovered that Sky was lost forever. Until the rescue call brought him to the cliff face where Sky and her cousin Boone dangled due to a poorly planned climb.

Now Rowdy’s love-’em-and-leave-’em-to-hide-his-pain activity is brought to light, and he’s unwilling to invest his heart to Sky again. Or, is he…

So, as far as this book went, it’s a super quick read. I had thought we’d face more of a battle between Sky and Rowdy, but they both come to terms with each other eagerly. A big conflict to be resolved, however, is the entry of Rowdy’s step-sister, Anna, into the mix. She’s obsessed with Rowdy, though no one noticed it before Sky returned. Her psychopathic activity leaves Skylar fighting for her life and turns their mutual friends into a cloak-and-dagger society. This seemed a bit extreme, for me, but Rowdy’s one of those loyal sort–doesn’t want to hurt anyone openly–which I can admire. Had I been Sky, however, I’da wrung that dude’s neck!

The story’s got a decent pace and I learned a whole lot of fancy lingo to flash about the next time I encounter a rock climber. There’s something to be said for getting close to the setting, and I could almost taste the cliff as close as we got. If you’re looking for a quick read, one where the MC’s actually loved each other deeply once and reconnect with ease, you’ll like THE NAKED EDGE. It’s not too steamy and has some interesting–or crazy, in the Fatal Attraction-lunatic sense–plot twists.

Interested? You can find The Naked Edge on Goodreads and Amazon. (Currently priced at $.99!) 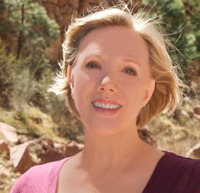 Charli Webb is a new to writing New Adult, but she’s not new to writing. Her alter ego–Charlotte Abel–has been active in the YA paranormal bibliosphere for years. Her Channie series “will make you believe in magic.”

***GIVEAWAY***
Click the Rafflecopter link below for your  chance to win
one of six (six) ebook copies of THE NAKED EDGE.
Giveaway Code: a Rafflecopter giveaway

3 thoughts on “Going Over THE NAKED EDGE–Review and Giveaway”