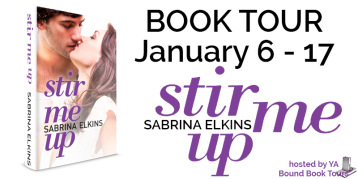 Hi there and welcome to my stop on the STIR ME UP blog tour hosted by YA Bound blog tours. For other stop on the tour, click here. Today’s book is a mature YA romance by Sabrina Elkins.

Summary from Goodreads:
Cami Broussard has her future all figured out. She’ll finish her senior year of high school, then go to work full-time as an apprentice chef in her father’s French restaurant, alongside her boyfriend, Luke. But then twenty-year-old ex-Marine Julian Wyatt comes to live with Cami’s family while recovering from serious injuries. And suddenly Cami finds herself questioning everything she thought she wanted.

Julian’s all attitude, challenges and intense green-brown eyes. But beneath that abrasive exterior is a man who just might be as lost as Cami’s starting to feel. And Cami can’t stop thinking about him. Talking to him. Wanting to kiss him. He’s got her seriously stirred up. Her senior year has just gotten a lot more complicated….

Praise for Stir Me Up:

“Fun, steamy, and leaves you hungry for more. Sabrina Elkins nails the vulnerability of becoming an adult and the choices that come with growing up.” —Katie McGarry, author of Dare You To

“This book is one of my favorite young adult contemporaries. Not only does it feature a hot romance, it’s also very meaningful and well, you just have to read it and see.” —#1 New York Times bestselling author Jennifer L. Armentrout

I read this book on fast-forward. Cami is a high school senior who has grown up in her father’s restaurant. She’s always cooked, and wants to make it her career, despite her father constantly pushing college. That’s not the only force on her life, however. Her boyfriend is pushing her into a more physical relationship, and now her new step-mother is pushing her into a closet of a room to accommodate her nephew, an amputee returning from Afghanistan.

Julian is not happy to be “home”. Since he enlisted in the Marines his aunt, and former guardian, has married and his new step-cousin is…too much. He’s mean and nasty; angry at the world and his crap luck. His parents die, and his comrades die, and now this busted up young man feels he has nothing to offer the pretty girl who sees him, always, at his very worst.

Julian’s gruff demeanor would put anyone off, but, after years of prep work in a professional French restaurant, Cami’s used to overbearing men. Not that she’s looking for anything. Really, because she isn’t. She and Julian do develop quite a friendship, bonding over the pain of losing mothers–his to cancer, hers to abandonment. The boyfriend? Well, he doesn’t quite measure up to Julian, even as an amputee.

Their relationship does turn physical–after months of get-to-know-you–and it’s tender and caring, not a hot sticky mess. Through their love, Julian is able to move past his trauma (mostly) and Cami develops the confidence to take the next step in her professional world–pretty much tell her dad no college.

It’s a solid love story with well-drawn characters and patient affection. Due to the not-exactly-fade-to-black sex, the book is rated for upper YA readers. I think it’s acceptable for anyone who reads YA.

Disclosure: A copy of this book was given to me by the publisher for the purpose of an honest review.

Interested? You can find STIR ME UP on Goodreads, Amazon, Barnes & Noble, Kobo, BAM, iTunes and ZOLA.  So, pretty much anywhere!

About the Author
I am a former journalist who worked for the Los Angeles Daily News and other newspapers in the greater Los Angeles area. Prior to this I worked in advertising, writing ad copy for corporate travel accounts and major motion pictures. My first job out of college was as an administrative assistant to an executive chef and a food & beverage director at a Four Seasons hotel. I also spent some time working as a prep cook for Spago in Beverly Hills.

I received my Master’s degree in Journalism from the University of Southern California. While in graduate school, I had the privilege of studying fiction writing under renowned author Hubert Selby, Jr., and comedy writing under famed comedian Shelley Berman. I am a past participant of the Squaw Valley Community of Writers Summer Writing Workshop.

Raised in the woods of Vermont, I now live in the greater Los Angeles area with my husband and three children. STIR ME UP is my first novel.

***GIVEAWAY***
Click on this link: a Rafflecopter giveaway
to win 1 OF 3 STIR ME UP fun foodie gift packs!

RULES AND RESTRICTIONS:
Contest is void where prohibited. Entrants must be 18 or else have parent or guardian’s permission to enter. Winners will be notified via email and will have 48 hours to respond  or another winner’s name will be selected. Winning entries will be verified for authenticity.