This book is “A Christmas Story” for American boys raised in the 80’s. 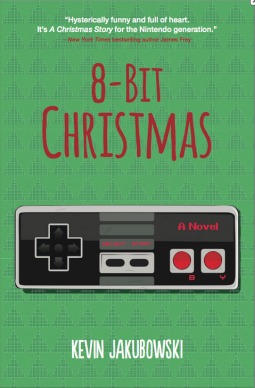 Kevin Jakubowski’s debut novel is a pseudo-memoir-style prose effort that made my cheeks hurt from smiling. I laughed in all the right places.

Disclaimer(s): I am not a boy–but I was raised in the 80’s in Chicago’s south suburbs, so I actually KNOW the setting–Batavia, IL. My Southside-raised parents spoke much like the MC’s parents. I survived my own personal “knock-off Cabbage Patch Christmas.”

Take a trip back in time, for a moment. Before ADHD diagnoses, and X-box, and Netflix. Before cell phones and two-income families, and cars with installed movie players.

Jake Doyle is nine. A rather annoying kid in his classes, Timmy Kleen–who’s wealthy and spoiled and poorly behaved–is the proud owner of the newest fad in video gaming:  the Nintendo Entertainment System.

Despite being an unpleasant cur, Kleen is catapulted into rockstar status by his schoolmates who mob Kleen’s front yard hours before 9am vying to be one of the lucky ten invited in to play–or watch Timmy play.

Tired of suffering Timmy’s whims–especially when Kleen decides the charge for entry–Jake’s mission becomes: obtain a Nintendo of his own. And his campaign is robust.

His parents aren’t keen on this Japanese technology. Reports of kids having seizures are problematic. What God-fearing mother would buy such a monstrosity? So Jake jumps into the Boy Scout wreath-selling competition to win the grand prize:  a Nintendo. He busts his hump–only to suffer an extreme setback.

He contacts his rich uncle. His grandparents. Anyone and everyone. He even forms an unholy alliance with his younger sister promising to help her get a red-headed-freckled Cabbage Patch doll (named Dawn) in exchange for her help convincing the parents that Nintendo is the best of all possible gifts.

Nintendos sell out across the land.

And then real tragedy strikes.

One of Kleen’s more robust outbursts of erratic behavior results in the death of a jumbo TV and a four-legged member of the Kleen household. Outraged with the “violence of video games” Kleen’s parents secure a ban on Nintendo sales in Batavia and the nearby towns. Now teens from Geneva and Fox Lake are itching to rough up these rabble-rousing elementary school kids who shredded their Nintendo dreams.

Jake’s Nintendo mission isn’t dead, however. If he can only get to Chicago, he could BUY a Nintendo. And, it turns out, his class is heading to Chicago for a field trip to the Art Institute. Vowing to build an open-access playing zone, Jake convinces his buddies to sell their baseball cards to bankroll the purchase. His attempt is…well, how successful do you think it may be? He’s nine, on his own in Water Tower Place, and wearing his Batavia Football cap.

In the end, Batavia has many more Nintendos in operation on Christmas Day–but the lessons Jake learns are awesome. I had a tiny bit of trouble with a chapter that seemed out of the narrative sequence, and would have appreciated a clue that we were experiencing a flashback, but otherwise I wholeheartedly enjoyed the ride.

Why I loved this one:  My elementary school buddies were insane Nintendo addicts. Reading this brought me right back to my childhood, much like A Christmas Story does for my parents, and It’s A Wonderful Life does for my grandparents.

The black-market Cabbage Patch hunt. Oh! My own mother battled crowds to get those “special” toys when I was a kid–something I have done for my own kids. (Today, my black market buys arrive with Ebay labels. Shh!)

I had my own Timmy Kleen. Only her name was Carrie. She had an Atari and made my sister and I suffer untold hours of Ms. Pac-Man in order to play RiverRaid for the five minutes it took us to bite it in the game. We are still good friends.

The commercialization of Christmas is something I won’t belabor here, but Jakubowski’s handling of what was a growing trend in 80’s America is poignant.

Jake’s humor. He is a hysterical kid, with a quick wit and indomitable spirit. Narrator ‘voice-overs’ only reinforce the nostalgia.

The ending. It was excellent. And, no, I’m not giving it away. Just know that Jake is probably the happiest kid on his block when Christmas ends.

Final Disclaimer: I obtained a copy of this book from NetGalley for the purpose of review.

Interested? You can find 8-bit Christmas at Goodreads, Amazon and Barnes & Noble.

If you pick it up, come back and tell me what you thought about it.

One thought on “Reminiscing with 8-Bit Christmas”