Hi there!  I’m back with another pre-Halloween SPOOKTACULAR read–this time, sharing a fave from the month with the Armchair Squid and a gang of book bloggers. This month I’ve read probably twenty-five books…some I liked, others, meh… 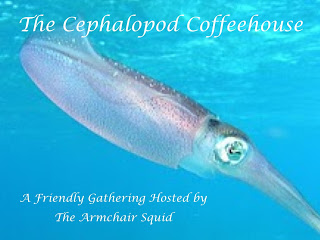 This month’s feature is a new release. I got the ARC at the ALA 2013 annual meeting, and it’s been on the store shelves for a few weeks. It’s a perfect October read. Why?

UNBREAKABLE is the first book in The Legion series by Kami Garcia–best-selling co-author of Beautiful Creatures.

Kennedy Waters is 16, an artist with eidetic memory and a perfect GPA, and destined for fabulous things. She and her mom share a lovely home in the Georgetown area of DC. Her dad left years ago, but Kennedy’s survived that sorrow. Until her mom ends up dead.

Heart failure? In a healthy 30-something, non-smoking woman?

Hey, doc. Cracker Jack called. They want your diploma back. *V throws hands in the air and walks off*

Well, as you may imagine, I didn’t buy the whole ‘heart failure’ diagnosis. And neither did Lukas and Jared Lockhart. Good thing, because that life-sucking ghost that did Mrs. Waters what for? It came back to finish the job on Kennedy.  This time they were there to save her.

See, the Lockhart twins are part of a secret society, The Legion, who are heaven-bent to rid the world of Andras, a demon unleashed by their ancestors right about the time the ink dried on the Declaration of Independence. Along with Priest–a 15 y/o weapons whiz and Alara a 17 y/o voodoo priestess, these teens make up a modern-day Ghostbusters-cum-Exorcist crew. And Kennedy is their missing piece.

Except, she has no idea what she’s doing. The others had been trained for Andras-hunting since before they could ride bikes, but Kennedy’s mom didn’t want her mixed up in this supernatural quest. Before she knows it, Kennedy’s bungling calls Andras to their Batcave and they have to flee the weapons and medicinals in a tire-burning escape. And don’t even get me started on her mishap at the mansion!

See, Andras controls ghosts. He can’t take his own form until he’s regained enough power–and he gets that power from evil deeds done on his behalf. So he’s got ghosts practically killing Kennedy and the Legion–all to protect the one weapon that might destroy him–the Opthalmic Shift.

In the meantime of hunting all the pieces to this ocular deathpiece, Kennedy wants desperately to belong to something–anything–as rootless as she is in the world. It doesn’t hurt that broody Jared Lockhart is delicious and unattainable. Well, sort of unattainable. He’s in deep like for Kennedy, but he’s got a Big Secret that only Kennedy doesn’t know…and it’s a doozy.

Still, the Legion toils onward, putting bad ghosts down and releasing beneficent spirits to their eternal peace. It’s a thrill ride that ends in a prison with a posse of murderous ghosts on their tail. At the last Kennedy is FINALLY a heroine–assembling the Shift just in time for the cliffhanger ending and a catastrophic miscalculation on the Legion’s part. Because the Shift isn’t a weapon after all.

And the whole goddamned world is screwed.

Hope you enjoyed this look at a great new paranormal YA adventure, quasi-romance. It was a fun read and is cool for upper-middle grade readers and onward.

Feel free to check out the rest of the Coffeehouse readers on their literary journeys by clicking the linky-links below: (fingers crossed that this works…)

Let me know if you check out UNBREAKABLE and what you think of it.