Hi there!  Welcome to my stop on the UNEXPECTED Blog Tour organized by AToMR! 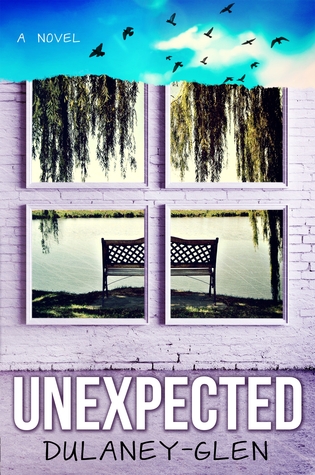 Book Description:
Ian wasn’t ready to meet Grace Holtsen. In no way was he prepared for her. But can you ever be ready for fate to step in? Can you ever be ready to meet the one person who will change your entire existence? Ian knew that Grace would change everything he was used to, but something about her made it worth it. For the first time somebody seemed worth the risk. Will Ian jump and let fate wait for him at the bottom? Hoping that it can somehow save him…hoping that Grace can somehow save him.

I don’t think Grace is like most girls.
Maybe that’s the thing that I can’t put my finger on.
Maybe for the first time, I’ve met a girl that’s unlike
anyone that I’ve ever known.

Grace, a single mother and owner of a Nashville recording company, met Ian Paul, a recent college grad and her new employee. The moment he entered her world, it turned upside down. She knew better than anyone that a relationship with Ian would never work. He was never supposed to fit into her life, and she was never supposed to show up in his. But what happened between them was something more than either of them ever anticipated. Grace was unprepared for how bad it would hurt when they were faced with something far more unexpected.

He stole the rest of my heart tonight. I
know that no matter what happens tomorrow, or days from
now, I’ll never want it back.
I could never give it to someone else.

Whoa. I loved the slow build of this one. Grace Holtsen’s worked hard for her thriving recording business in Nashville. She treasures her son, Milo, an unplanned memento of Grace’s first time brought back from a family vacation. She has a tense relationship with her parents–who pretty much kicked her out when she decided to keep her baby. Brash and sassy BFF Nina is a fantastic counterpoint to Grace’s reserved nature.

In fact, it’s Nina’s audacity that links Ian and Grace when Nina schmoozes Ian into pumping their gas, despite his not working at the gas station. Imagine Grace’s astonishment when Ian turns up at the company pow-wow an hour later as the new PR hire. *face palm*

Ian Paul’s in Nashville because his BFF is in a band–and it’s a good one. He’s been managing their PR throughout college and now that the sheepskins have been passed, the boys are set to take the music scene by the throat. Ian convinces Grace to hear one of their sets, and she’s captivated–has to sign them–and put Ian in charge as their manager.

While working in close quarters it’s clear that an attraction is developing. Grace hasn’t had a serious relationship in a good long time, and she’s not sure taking a chance on a strapping young buck is a great idea.  Ian is a hit with Milo–being the superhero step-dad-type–and he’s wooing Grace thoroughly regardless of their  6-year age gap.

It seems life is going grand for this fledgling couple until Grace visits Ian’s childhood home and learns a secret that may drive her and Ian apart forever.

So, I liked it. It’s a solid contemporary romance. The journal-like chronicling makes for an intimate ride. There was a point when I felt that the convenience v. coincidence battle was too much the former, but for those who love the “destined to be together” tales UNEXPECTED is right in your sweet spot.

K. Dulaney was born, raised, and still resides in the Mountains of North Carolina. She is the proud mother to an amazing little boy, and happily married to her high school sweetheart. Dulaney attended Southern Universities and obtained her Bachelor’s Degree in Psychology and a Masters in Family Studies. Her passion for reading and books began at very early age, and Dulaney dreamed of one day writing stories of her own. Partnering with her sister, J. Glen, they began a journey that has exceeded their expectations and proven that through hard work and determination, that dream can be a reality.

J. Glen is a North Carolina native currently residing in a small mountainous town. She attended an East Coast university and obtained a degree in Communication and Journalism. With an interest in writing at a young age, Glen had one idea of the perfect career and now, along with the help of her sister, she’s embarking on a journey to achieve just that.

Want to win some swag? These lovely ladies are offering up the following goodies!!
(2) Print copies – US Only
(2) eBook copies gifted from Amazon or Barnes and Noble
(1) $25 Amazon Gift Card and
(2) swag giveaways – US Only
a Rafflecopter giveaway