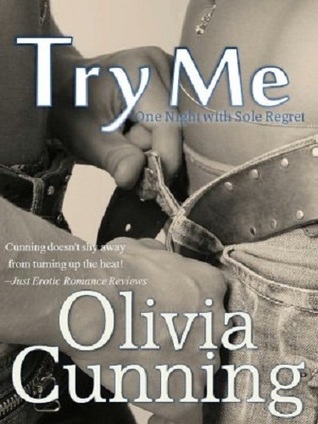 Who hasn’t dreamed of turning the head of a famous rock star?

That passion, that excitement of a sexy brush with fame probably started with Elvis and it’s more than an idle dream for some women.

And that’s what I love about Olivia Cunning’s novella series: One Night with Sole Regret–she gives us the fantasy from start to finish. Each night a separate member of the band finds a woman and the passion is explosive.

The first installment, TRY ME, follows the activity of Gabe “Force” Banner, the mohawked drummer and his encounter with accountant Melanie Anderson following a concert in Tulsa.

Melanie has tagged along with her friend Nikki, a girl after the attention of Sole Regret’s lead singer, Shade. Thing is, the only way Nikki and Mel can get backstage is to convince the roadies they are up for a wild night with Shade–together–and Mel is not down with it. She’s terrified of tattooed men and ends up insulting the copiously-inked, arrogant Shade right to his face, much to the amusement of Gabe.

Gabe, his own ink covered by cap and shirt, begins talking to Mel. He’s never known a woman to turn down Shade, and is drawn to her independence. Chatting casually, Mel inadvertently mistakes Gabe for another fan and is later appalled to learn that Gabe is not only the drummer, he’s also heavily tattooed… Of course by the time she learns all this, she’s hooked by his good looks and down-to-earth nature.

What cements it all? Gabe opens up about his closet-geek status and Mel is captivated. Gabe can’t understand why Mel being attracted to him for reasons other than his fame is so potent, but it really stirs him up.

I love the way they come together. He feels free to express himself in a way he never usually does, and Mel is just as open in return. They bond, and the following morning they both know more has happened than a one-night stand.

TO BE CLEAR– this is a STEAMER!! So super hot I thought my iPad might melt.

And what’s even better?

There are four more nights with Sole Regret! (So far…)

If you check TRY ME out, please let me know what you thought in the comments!

You can pick this title up on it’s own or as part of the ALPHA BAD BOYS box set I reviewed earlier. If you buy the box set you’ll get TEMPT ME, the second novella in this series–at a discount!